Frodo Lives! A Spirited Lord of the Rings 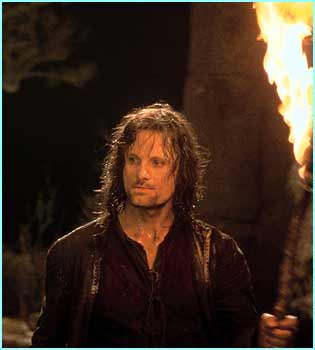 © New Line Productions Inc.
From the sunny fields of the Shire to the sulfurous caverns of Isengard, Peter Jackson vividly re-creates the wondrous worlds within J.R.R. Tolkien's The Lord of the Rings. The long-awaited adaptation of the first book of that trilogy, with its spectacular scenery, stupefying effects and epic scope, is a dream come true.

Tolkien probably would have looked down his nose at Jackson's painstakingly detailed, eye-popping screen translation of The Fellowship of the Ring. Then again, the old Luddite wouldn't have cared for anybody else's, either.

It's always tricky to adapt a classic, especially one with legions of fanatical followers. Such a movie can never live up to the wildest expectations, although Jackson's version comes within a whisker. Even Tolkien might have delighted in the silvery sounds of the Elvish tongue (with English subtitles), spoken between a pair of ethereal lovers, and the director's gift for storytelling.

Jackson and his co-writers, Philippa Boyens and Fran Walsh, are faithful to the original story line, but they had to cut certain secondary characters and plot twists to stay (barely) within a three-hour running time. Even so, the tale is highly complex, and one of the movie's achievements is that even the uninitiated are unlikely to get lost in the woods.

After a prologue about the history of that all-powerful talisman the One Ring, the camera finds the Shire, a rural enclave inhabited by wee, hairy-footed farmers called hobbits. They are an insular people and, with the exception of Bilbo Baggins (chipper Ian Holm), none has gone beyond the boundaries of their homeland.

Bilbo's last - and only - adventure ended with the discovery of the golden ring, which was then in the hands of a sibilant cave-dweller who lived in its thrall. But then everyone is, or could be, under its control: It was created with the blood of the Dark Lord and forged in the fires of Doom. Its attraction is irresistible and its power, once unleashed, unstoppable. No one possesses the ring; one is possessed by it.

The hobbits' isolation makes the Shire an unlikely and therefore perfect hiding place for the coveted totem. But even a humble hobbit will gradually succumb to its evil spell. Bilbo realizes that he is growing weaker, ever more tempted to harness the ring's power, and passes it on to his cousin Frodo (Elijah Wood) through the auspices of the wizard Gandalf the Grey (Ian McKellen).

Gandalf, an old friend of Bilbo's, is seldom in the Shire these days, but he continues to see to its people's welfare and the safety of the ring. Alas, the Dark Lord - Middle-earth's ultimate villain - is intent on reclaiming the ring for his own evil purposes, and his spies have traced it to Bilbo's cozy, grass-covered bungalow.
Frodo must take the ring and leave the Shire immediately, warns Gandalf, for Ringwraiths in the service of the Dark Lord have already been seen in the vicinity.

Frodo, a youth despite his 50 years, wants no part of his onerous burden: He's charged with disposing of the ring without giving in to its temptations or letting it fall into anyone else's hands. Nor does he believe that he's up to the task. But with Gandalf's guidance, the four-foot-tall Frodo comes to realize that "even the smallest
person can change the course of the future."

Frodo's path is a humdinger: He must journey across Middle-earth to the Crack of Doom, there to destroy the ring forever. His well-meaning friends Sam Gamgee (Sean Astin), Pippin (Billy Boyd) and Merry (Dominic Monaghan) come along on the quest, not always to Frodo's benefit.

They are joined by Strider (Viggo Mortensen), a ranger; Prince Legolas (Orlando Bloom), an elf; Gimli (John Rhys-Davies), a dwarf; and Boromir (Sean Bean), steward of Gondor. Along with Gandalf, they form the Fellowship of the Ring, sworn to protect Frodo to the death. The members of the Fellowship are swept up in
an unrelenting, tautly directed rush of saber-rattling battle scenes, for they find themselves set upon not just by the Ringwraiths but also by the demonic forces of the perverted wizard Saruman (Christopher Lee). Once Gandalf's superior and the greatest of all the sorcerers, he's declared himself in league with the Dark Lord.

For all its 500,000 words, The Lord of the Rings is at heart a parable of good vs. evil. The only shades of gray are in Gandalf's ashen beard and dusky robes. And, of course, good will ultimately triumph - though not in this first installment of the cinematic trilogy, which will conclude in December 2003.

The casting is superb and the acting energetic, but Tolkien's readers, including this one, are sure to have their quibbles. Who would have dreamed that hobbits look more like four-foot fashion models than pudgy garden gnomes? They do, after all, eat six meals a day and are founding members of the clean-plate club.

But Wood, an eloquent actor with deep doe eyes, quickly convinces us that hobbits have always looked justlike this. (They must have the metabolism of gnats.) Mortensen, as Strider, is a revelation, not to mention downright gorgeous. And McKellen, carrying the burden of thousands of years' worth of the fight against evil,
is positively Merlinesque.

Some pundits have compared Lord of the Rings to Harry Potter and the Sorcerer's Stone, but it's more of a medieval Star Wars, and every bit as stirring. It's clearly a labor of love for Jackson - one that makes you forgive all the horrible hype bestowed upon it.
Top of this page
Last edited: 19 December 2007 04:12:51