"I Still Ask Why" 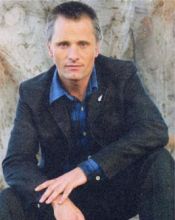 As he prepares for the release of his first film since The Return of the King, Viggo Mortensen remains leery of fame.

"As a kid you fantasize about all the adventures you're going to have," Viggo Mortensen said. "You imagine yourself exploring the world, and you wonder if you really can. Most people, after a while, sort of repress that desire and instead they just live inside a box and never attempt it. But I wanted adventure - and I know that life is short. So I tried to do a lot of things."

Among the things Mortensen, 45, has done are write three books of poetry, publish collections of his photography, perform jazz on three CDs and show his paintings at galleries in New York, Copenhagen, even Havana. He also co-founded and runs Perceval Press, which publishes art and poetry books.

Now, somewhat unexpectedly, Mortensen also has become an international movie star - indeed, a sex symbol - as Aragorn, the noble warrior king in The Lord of the Rings trilogy. The role is a high point, so far, of an acting career spanning two decades, 39 movies and a range of characters, including Demi Moore's sadistic drillmaster in G.I. Jane, an alcoholic in 28 Days, Diane Lane's hippie lover in A Walk On The Moon and Gwyneth Paltrow's homicidal boyfriend in A Perfect Murder. On Friday, he opens in Hidalgo, a historical action film set in 1890.

"I didn't expect to be doing this for so long," Mortensen said about acting. "I still question why I do it."

I met with Mortensen in Los Angeles, where he lives in a modest house in Topanga Canyon and continues to create art, publish books and spend as much time as he can with his son, Henry, 16, the only child from his 10-year marriage to punk-rock singer Exene Cervenka, 48. The couple divorced in 1997 and share in the upbringing of their son. Viggo is an intensely devoted father and considers Henry his best friend.

"My son's the reason I'm in L.A.," he said. "I hate the place, but I didn't want to be an absentee father. My son has friends here from when he was little. He has continuity in his life - something I didn't have growing up, because my family moved so much. Different cities, different languages. You'd try to make new friendships, and then they'd be cut off. It was an unsettled life."

Viggo is the eldest son of Grace and Viggo P. Mortensen. "My dad was from a farm in Denmark," the actor said. "In 1954, he went to Norway and met my mom [a New Yorker working at the American consulate]. They wed, moved to New York and I was born."

The family moved to South America, where Viggo Sr. managed chicken farms and ranches in Venezuela and Argentina. They moved often, sometimes barely making do. "My dad was restless," Mortensen noted. "He exchanged a stable life for seeing more of the world." Two more sons were born, Charles and Walter, but the marriage grew increasingly unhappy.

When Viggo was 7, his parents sent him to boarding school in Argentina. "It was a strict school, isolated in the foothills of the mountains," he said. "Other than holidays, I really didn't see my parents. The other kids were miserable, always crying or wetting their beds. But I was pretty self-sufficient. So I guess it must have suited me."

Viggo's parents divorced when he was 11. His mother moved with the boys to northern New York. It was the summer of 1969 - the days of Woodstock and anti-war protests. I asked Viggo how he had reacted to all the sudden changes in his life.

"You get used to it, I guess," he replied, then added, "but from my teens and into my 20s, the first thing I thought of when I woke up, before even lifting my head, was that I would die. I thought of all that I wanted to learn and do, the books I'd never read and all the places I'd never see, and it made me really angry."

Viggo attended Watertown (N.Y.) High School. He was a good student, adept at languages. He also excelled at sports. While handsome, he was shy and a bit of a loner. "I'm comfortable being by myself," he said. "If I could get out of going to my own premieres, I would."

He finished high school in 1976 and went on to St Lawrence University in Canton, N.Y. After graduation, he moved to Denmark - driven, he said, by the need for a defining purpose in life. He found it there, writing poetry and short stories while supporting himself as, among other things, a dock worker and a flower seller. He fell in love in 1982 and followed his girlfriend to New York City, hoping for a long romance and a writing career. He got neither.

In New York, Viggo found work waiting tables and bartending. He also became interested in acting. "I'd see a movie and think, 'How do the actors do that?'" he explained. "I wanted to know."

In 1982, he began acting classes. Three years later, he made his film debut with a small part in Witness. Moving to L.A. in 1987, he appeared in the satirical movie Salvation! and married his co-star, Exene Cervenka.

Despite having done some awful movies (Black Velvet Pantsuit, American Yakuza), more often than not Mortensen has played opposite fine actors - among them, Al Pacino, Nicole Kidman and Denzel Washington - in serious pictures such as Carlito's Way, Portrait of a Lady and Crimson Tide. Yet stardom eluded him. Then, four years ago, his luck changed.

"I got a phone call about a movie I didn't know anything about, based on a big fat book about elves, which I'd never read," he said. The caller was the director Peter Jackson. He'd begun production of The Lord of the Rings and wanted Viggo to play King Aragorn. "They were going to make three movies in one continuous shoot and basically wanted me to leave for New Zealand the next day," the actor continued. "But I didn't want to be away from my son for that long. I asked him if I should accept the part. Henry knew the story. He said, 'It's cool. Do it!'"

Mortensen's work in each of The Lord of the Rings films has been applauded, none more so than his performance in The Return of the King. Much of the power in his portrayal of the noble Aragorn is derived from the fact that his character's moral integrity, patience and sense of proportion reflect in some measure the actor himself. He too, in his own way, is generous, morally engaged and authentic. I asked Viggo what made him that way.

"I knew early on that life is sorrowful," he replied. "We all decline, slowly or quickly, and we die. We can't change that. But we can change our attitude toward it."

He paused for a moment, then added: "We each have only a limited amount of time here. We have to do more with it - pay attention, explore, be open to all of life. Because we have only one chance, we have to make life seem longer than it really is."
Top of this page
Last edited: 23 March 2005 17:30:42
© Parade.