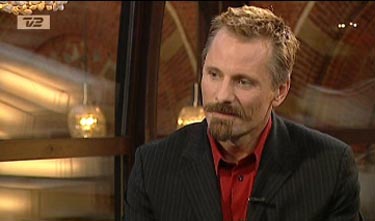 © 2007 TV2 Danmark.
This is a transcription of Viggo's appearance on the Danish TV2 programme Go'Aften Danmark, hosted by Hans Pilgaard.

HP: ...where you play a Russian mafia gangster-type driver. I suppose it is far away from the person you really are, so how did you prepare for the role?

VM: I started by learning Russian, or at least enough for the movie, and then I went to Russia; luckily I knew some Russians with similar experiences.

HP: So you simply met a real mafia boss?

VM: Or people that have been in prison and had some tattoos made.

HP: How was it, cause you seem so incredibly cool in the movie, to meet these people in real life?

HP: Really? Please don't be. Is it because I am the one who knows the script and you don't?

HP: When sitting opposite a real mafia boss who might have lives on his conscience. How was that?

VM: No, he wasn't a mafia boss, but I have talked to people who know the tattoos and the language and the kind of Russian I was to speak. Because at first I got help from a professor in the USA, a Russian, and when I met the others they said "It's correct, but it sounds like a professor. We would probably say it like this or in this way." That helped a lot. Then I could pass it on to David Cronenberg.

HP: Do you still remember some of the Russian words?

VM: Yes, but I only remember awful words that are not so nice to say here on TV.

HP: We do not understand anyway, so you can say whatever you want. There was also something about the Russian tattoos you see in the movie. There are some pictures where you can see those on your entire body. There are also some on your hands and something about you going out in London still wearing them.

VM: Yes, there were about 40 to 50 pieces. I had them on my hands and...yes...after the first fourteen days, I did not wash them off entirely, then there would be less work for the man who has to do them every day. Cause it took a long time.

But when I met some Russians, or they saw me, they got a bit nervous, so I thought I'd better wash them off every day.

HP: So there was someone who could see your tattoos and knew what they meant?

HP: If you looked at them as Nikolai does, I understand they were afraid.

VM: No, I just thought it was awful, but apparently we had done a good job.

HP: It is awful and the story behind the movie about Russian girls coming to London in hope of a better life is awful too. Do you remember or do you know that feeling of...what you dreamt about when you were young?

VM: Yes, being an actor, sort of, getting the role in a movie like this, telling interesting things. And the movie is hard and sometimes brutal but it is also beautiful. And there is an interesting relationship between Naomi Watts' character Anna and my Nikolai and the French Vincent Cassel, who plays the son of the mafia boss. I am a driver. He is really good.

HP: That is true, but as you mention, it is very brutal. There are scenes where you want to turn away in disgust but this also happens in real life. Another significant thing in the movie is that there is a scene where you are completely naked and where you are fighting. I will not reveal what happens since it is a very brutal scene, but how was it to play it? How did you feel playing it? I mean, you seem to be a very shy person. How was it to play naked on screen? It must be very difficult?

VM: Well, I was bothered a bit, but not more than I should be. At first it was a bit unusual, but mostly it hurt. I was kicked around in that sauna. But I think it was made very well and the director did a good job. And what I appreciate with the director David Cronenberg is that, in comparison to many directors, he is responsible with violence. He shows how horrible it is, the consequences you may say. It is not covered up, you see how it is and how horrible it is, and I think that is a good thing.

If you need to show it, show it like it is.

HP: A little like the old spirit of Stanley Kubrick. Showing how beautiful it is to show how awful it is? 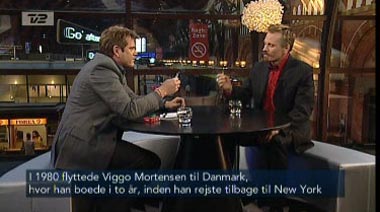 © 2007 TV2 Danmark.
HP: I notice in the film, that you put out a cigarette on your tongue. Is this something you really do or is it a film trick?

VM: Then you also have to do it.

HP: Are you serious?

HP: Jesus, only you can make me do such a thing and it is only David Cronenberg that can make you play naked.

You are not even allowed to smoke on TV anymore...well we are so politically incorrect now anyway...

Listen, do you want to play along with this? I would like to try and challenge you. No doubt you are a great actor, and people are talking about how this movie could be nominated for an Oscar. Perhaps also for you.

VM: If we are lucky.

HP: Does it mean anything to you when large movie magazines compare you with Clint Eastwood, John Wayne and James Stewart? And say that you have the same "uugrundelige", under the surface madness?

VM: That's something, but you need to be lucky. If it happens you say "thank you", but you can never count on it.

HP: I would like to challenge you. If I ask a question, can you answer in a certain way?

HP: If you could answer as a stressed businessman from Moscow on this question: You are turning 50 next year. What does age/becoming older mean to you?

HP: If you should answer the same question as Nikolai in Eastern Promises? What would you answer?

HP: What about this: A gay ballet instructor from San Francisco? 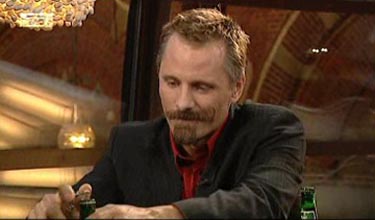 © 2007 TV2 Danmark.
HP: If you want to make people happy, you should give them something they appreciate. Like a part in a movie with David Cronenberg. I will leave that up to him, but I have something for you that I know you appreciate a lot..."biksemad".

VM: Have a nice evening Denmark. [Always the finish line in this show.]

VM: No, there is something I would like to say. I may not be used to Danish food on the table, but aren't we missing something?

VM: Yes, that is true, and...[bringing forth two beers]

HP: There are rumours about a movie with Connie Nielsen and Nicolai Coster Waldau. Is this true?

VM: I don't know whether that is possible.

HP: Cheers, it has been a pleasure having you here. Listen, you are not allowed to either smoke or drink on TV anymore...