Cronenberg And Mortensen Deliver On "Promises" 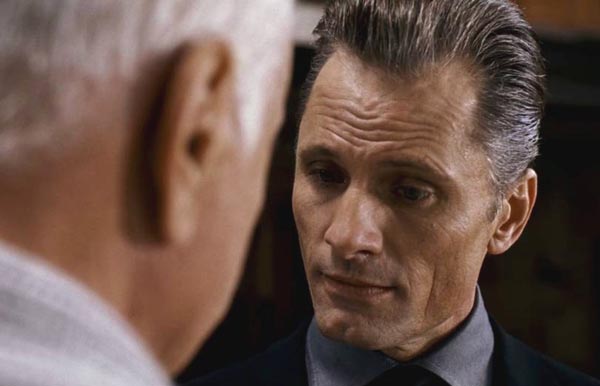 © Focus Features.
Scorsese and DeNiro. Lucas and Ford. Sometimes a director and actor work so well together, it's hard to think of one without the other. Now, after their breakthrough film A History Of Violence and their current film Eastern Promises perhaps we can add the team of David Cronenberg and Viggo Mortensen to that list. For, as good as Viggo was in Lord of the Rings, these past two roles have been some of the most interesting of his entire career. And, for as long as Cronenberg has been making pictures, perhaps none have been as successful as Violence and Promises.

That's not entirely surprising, considering they cover very similar territory. In Violence, Mortensen plays a small town man who is outwardly moral, unassuming, and likeable, but who could be hiding a very dark past. His character in Promises is much the opposite - here Mortensen is Nikolai, a low-ranking thug working for a family of Russian mobsters operating in London. Nikolai is cold and menacing, but early on in the film there are hints that he may not be as heartless as the other gangsters.

Most often, his softer side comes out during his interaction with Anna (Naomi Watts), a midwife working at a local hospital. Anna has delivered the baby of a teenage Russian sex slave with connections to Nikolai's employers. When the girl dies in labor, Anna takes it upon herself to locate the child's family, which draws her into the secret world of drugs, prostitution, and murder. While she attempts to discover the truth about the baby girl and her mother (primarily by reading and translating the mother's diary), Nikolai attempts to keep her away - seemingly to protect her from the mounting peril she finds herself in.

Primarily the danger comes from the ruthless head of the crime family, Semyon (Armin Mueller-Stahl), and his erratic son Kirill (Vincent Cassell). While Semyon is busy taking care of the family business, Kirill is out causing problems with rival gangsters - often leaving Nikolai to clean up his dirty work. Nikolai proves himself to be a loyal soldier when it comes to things like disposing of bodies. But when it's time to recover the diary and eliminate witnesses, where will his loyalties lie?

It's an intriguing dilemma, that makes for an exceptionally gripping film. Mortensen plays Nikolai perfectly as a man conflicted over what he must do, and where his responsibilities lie. And without giving away the ending, when the film is over and you think about the sacrifices he's had to make, it's hard not to feel sorry for the guy. The other actors do fine work - Watts in particular is radiant as the moral center of this world of darkness. However, this is ultimately Mortensen's film, and he absolutely owns it. It's a good thing for Cronenberg that Viggo's his guy.
Top of this page
Last edited: 19 November 2007 14:26:22