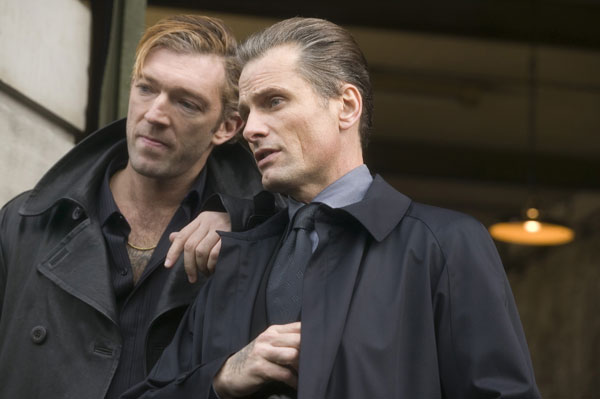 © Focus Features.
It would seem to be a kinder, gentler David Cronenberg who directed the arthouse crime thriller Eastern Promises, an edgy but ultimately redemptive fable about a hardened Russian gangster (Viggo Mortensen) faced with a decision that may put him at cross purposes with his ruthless employer.

But for the man who directed Dead Ringers and Crash and The Fly, kinder and gentler still leaves plenty of room for corporeal horror--the slit throat and sucking wound of one of the opening sequences, or a pregnant 14-year-old girl who hemorrhages all over a hospital emergency room floor. No, in that respect, Cronenberg has changed little since his 1981 sci-fi horror classic Scanners spattered the director's camera lens with arterial blood and exploded grey matter. But now his infamous "body horror" aesthetic is employed in the service of more humane and personal themes, leaving us with an uncharacteristic feeling of hope, if not outright uplift, when the bleeding stops and the credits roll.

Promises begins with the death, during childbirth, of a 14-year-old prostitute in a London hospital where Anna Khitrova (Naomi Watts) works as a midwife. Saddened by the death of the young would-be mother and the orphaning of her newborn child, Anna finds a diary and a business card in the girl's personal effects, and seeks out Semyon (Armin Mueller-Stahl), owner of the Trans-Siberian restaurant, in hopes of tracking down the baby's remaining family.

Over the protestations of her Uncle Stepan, Anna asks Semyon to translate the dead girl's diary: Despite his obfuscations, she eventually learns it contains dark secrets connecting the kidnapping and forced prostitution of the girl back to Semyon and his emotionally troubled son Kirill.

In the meantime, Anna has a series of chance meetings with Nikolai Luzhin (Mortensen) a journeyman gangster and friend of Kirill now seeking to make his bones with Semyon's organization. As Nikolai rises in Semyon's esteem, his new responsibilities include dealing, perhaps lethally, with the threat now posed by Anna and her family. But cold, calloused Nikolai has seemingly discovered within the depths of his lesioned soul an empathy for Anna and her tiny new charge, and within his divided loyalties lies the crux of a deadly dilemma.

All of the performances in Eastern Promises are strong, but most notable is that of Mortensen's, who brings a dangerous and brooding gravity to the role of Nikolai. Lantern-jawed and taciturn, Nikolai says more with his eyes than with his words; we're often left tensely watching his dark, flashing orbs, seeking some clue as to whether he'll let a slight or an insult pass, or surrender to the suppressed brutality that simmers within his breast. Mueller-Stahl, as Semyon, is nearly his equal, playing the Russian crime family patriarch as an insidious chameleon, capable of hiding his ruthlessness beneath a nigh-seamless facade of avuncular charm.

But despite its moments of eruptive violence (including one of the most riveting fight scenes in recent memory) and splashes of Cronenbergian viscera, Eastern Promises becomes gradually more focused on the human condition, on the nature of good and evil and the choices we make, as the film wears on. By movie's end, Nikolai has undertaken a soul-rending litany of complicated moral choices as he struggles with the ramifications of executing his sworn duties as a full member of Semyon's vory. Is he redeemed, in the end? That's for you to decide.

Cronenberg's filmmaking is slicker and more accomplished than ever before. But theme is the most significant point of divergence between latter-day films like Eastern Promises and 2005's History of Violence and his movies of yore. Whereas earlier films like The Fly and Videodrome dealt with isolation, alienation, and the dehumanizing aspects of technology, his latest work is more about connections, and the things that make us human. It would seem that the Master of Body Horror has finally discovered his soul.
Top of this page
Last edited: 13 November 2007 15:01:59