When The Hero Cuts Fingers

By Benedicte Lorenzen - translated by Chrissie

Source: MetroXpress
Viggo Mortensen plays a Russian and a very violent hero in the film Eastern Promises. MetroXpress met the Danish-American to talk about heroes. 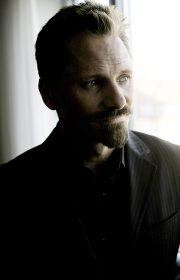 Denmark, September 2007
Image Gregers Overvad.
© 2007 Metro International.
Can a hero cut the fingers off a corpse and throw it in the river afterwards? Can a hero be a driver and a right hand man for the Russian mafia? Can a hero lie? Can a hero make love to a woman, who is kept trapped against her will? Yes, if the person is called Viggo Mortensen, and the director is the Canadian David Cronenberg.

On Friday the film Eastern Promises opens in Danish cinemas, and in it Danish American Viggo Mortensen plays the mysterious Russian Nikolai Luzhin, who works as a driver for one of London's most criminal families, descended from Eastern Europe.

On the surface he is the ice cold, sunglass wearing gangster, who without a murmur puts his cigarette out on his tongue, before cutting the fingertips off a corpse.

However, as the film progresses, it emerges he is another personality. A person who actually carries out his brutal actions in order to fight the evil in an undercover hero style.

For Viggo Mortensen it's precisely the characteristic to help others, no matter what may happen, that gives the characterization a reality.

"For me, heroes are people who despite living in brutal surroundings and having a hard life, still understand how to behave. Even though they do not get any prizes or thanks, and even though they may run a great risk, they still sacrifice themselves unconditionally for others," says the actor.

Mum is the biggest hero

Viggo Mortensen is a positive human being, who believes that there is something good in everyone, even though it may sometimes be kept well hidden. But among the many heroes around the world, there is one he underlines as the biggest one:

"I could mention many heroes, but I pick my mother. She has given so much all her life, without getting much thanks for it, simply because she has felt it's the right thing to do as a human being," Viggo Mortensen says.

Eastern Promises is a brutal film, where the blood sprays several times, but it isn't cutting through neck arteries and violence against women that is the true message. For Viggo Mortensen it's about showing the good things in man.

"It may be a surprise that the role I am playing is a heroic part. But it is, because he is put into some situations where it's downright dangerous to sacrifice oneself, but yet he does it. Many people think the film is about violence and sex-trafficking, but in many of the scenes you can see that actually it is mostly about tenderness, compassion and love," Viggo Mortensen says.

The role as the thoughtful Russian suits this Danish-American well. Even though he does not always see himself as a hero, he enjoys playing a part that takes into account the many facets that are found in a human mind.

"Once in a while I sacrifice myself for others, but just as often I am wrong, or I become tired and depressed. Therefore it's good to get an opportunity to play a person who is just as complex as I am myself. David Cronenberg is a gifted artist, who is good at studying people, and showing how complicated they can be in their relationships and behaviour," Viggo Mortensen says.

He can see some resemblances between himself and Nikolai Luzhin. Both are doubting people trying to realize who they are, and what they are doing.

They are also both trying to behave fairly with others. But that's where the likeness stops.

"Even though we have many things in common, there have also been many things I have had to learn in order to play the part. I do not have the abilities that Nikolai Luzhin has. Even though I probably could cut the fingers off a corpse, I wouldn't want to do it," the actor tells me.