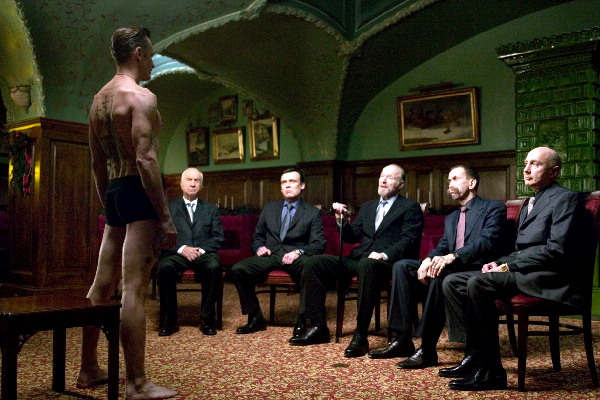 © Focus Features.
David Cronenberg's films have always been uneasy creations, disturbing excursions into the human psyche and its corporeal container. His earliest gore-enriched works, The Brood, Scanners and Videodrome were engaging enough horror films, but it wasn't until 1986's The Fly that Cronenberg achieved a genuine masterpiece. It would take him almost 20 years and several weirdly engaging yet deeply flawed films to repeat his achievement with A History of Violence. Except this time, horror was replaced by actual human experience. A History of Violence ushered in a new Cronenberg, one not fixated on the fantastical and hallucinogenic, but one interested in the depth of his characters and the all-too-icky narratives that surround their life circumstances.

Fact is, Cronenberg had been edging this way for years, but Violence was a breakthrough, his ''step up to the plate and hit one out of the park moment. The story of a very bad man struggling to redeem his life, only to be unwittingly sucked back into the sludge, it showed us a Cronenberg who had matured - as a person, as a filmmaker, as a storyteller.

How to follow it? Cronenberg chose to reunite with Violence star Viggo Mortensen and delve into an intimate and startling story of a London woman who finds herself involved with some very unsavory folk, and who, through pure happenstance, serves as a catalyst for a major change in both their lives and in hers.

The film is Eastern Promises, and if it's not as viscerally thrilling as A History of Violence, it is certainly every bit as memorable.

For Eastern Promises, Cronenberg takes a very low-key, Hitchcockian approach. After a startling - yet not entirely unexpected - opening sequence set in a barber shop, the narrative takes a sinister path, keeping the pace slow, steady, deliberate. The screenplay by Steven Knight takes a relatively straightforward approach, but the surprises that both Knight and Cronenberg have in store jolt us out of our ''We know where this is headed'' mind set. There is no way to second-guess Eastern Promises. You'll think you're calling the play to come and suddenly you're thrown a curve ball.

The beauty here is how all the movie's elements co-mingle. After the movie ends, and you recall its various touchpoints, Cronenberg's work suddenly acquires unexpected retrospective depth. There is tragedy here, but it's not the tragedy you've anticipated - it's the tragedy of self-sacrifice.

Naomi Watts plays Anna, a hospital midwife who helps deliver the infant of an anonymous 14-year-old Russian prostitute. The girl dies, the baby lives. Anna, emotionally involved for reasons that soon become hideously clear, finds the girl's diary and asks her Russian uncle Stepan (Jerzy Skolimowski) to translate. When he refuses, Anna seeks the help of a local Russian restaurateur, Semyon (Armin Mueller-Stahl), whose establishment the diary references. Anna wants to find the baby's family. Semyon, over a bowl of homemade borscht, promises to help, but stresses he needs the actual diary. What Anna doesn't know - and what she'll soon learn - is that its contents implicate the elderly man in a terrible act.

No surprise there, as Semyon, a Russian expatriate, lords over an organized crime family linked to the notorious Vory v Zakone criminal brotherhood. His son, Kirill (Vincent Cassel), is a drunkard and a buffoon, and quite possibly ''queer.'' Semyon's disappointment in his son is etched into his brow, yet Kirill is still his flesh and blood, the successor to his throne. When Kirill gets involved in a deadly battle with a rival gang of Chechens, Semyon, with the help of his chauffer, Nikolai (Mortensen), attempts to preserve his son's life.

The two stories - that of Anna and the diary and that of Kirill and the Chechens - unite in a masterful, gripping way, generating the kind of high-level tension and unease that Cronenberg does so well.

The atmosphere is dense with malevolence, and yet it also contains rich, vibrant bursts of Russian culture. But there persists the possibility of a dangerous, fatal eruption. When that eruption does finally arrive, it does so in the most improbable setting imaginable. The scene - and you'll know it when you see it - is an instant classic, a ballet of brutality and blood, with decidedly feral undertones. It is a work of incomparable brilliance.

Mortensen gives a career-defining performance as Nikolai. Forget his Lord of the Rings heroics, this is a man born to play bad guys. There is a searing malevolence to his character, and yet beneath it all, Mortensen reveals the barest hint of compassion and warmth for both Anna and, to some extent, Kirill. Watts brings to Anna both a toughness and naïveté; she's the perfect centerpiece. Muller-Stahl is superb as Semyon. An outwardly kindly Russian elder, his chilling blue eyes convey the ferocity and evil that lurks within. Cronenberg grasps that the eyes are the window to a person's true nature - and he deploys it to perfection with both Muller-Stahl and Mortensen.

A History of Violence surprised everyone when it was Oscar-nominated (for best screenplay and supporting actor). Don't be surprised if, come Oscar time, history repeats itself.