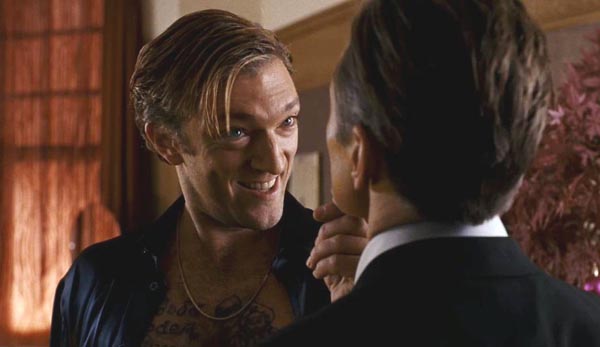 © Focus Features.
Gangland thriller, murder mystery, immigration saga, family parable - you can pin a lot of labels on Eastern Promises, but they don't adhere for long.

In a culture that increasingly defines its movies in ever-narrowing categories - the torture flick, the geek comedy, the fantasy epic and on and on - a film that moves to its own rhythms and rules is more than just refreshing. David Cronenberg, director of such memorable chillfests as Scanners, The Fly and the 2005 masterpiece A History of Violence, has created a movie that is contemporary storytelling at its finest.

The genre-busting in Eastern Promises, which stars Viggo Mortensen and Naomi Watts, starts right in: A highly agitated young man enters a London barbershop and carves a horrifying gash into the throat of a Russian underworld figure. The assassin makes a mess of this and we almost feel the blade ourselves. Recoiling from the nauseating details, we're also confused: Are we watching the opening of a gangster flick or horror movie?

We've barely recovered from that scene when Cronenberg involves us in a murder mystery - or what seems to be one. Anna (Watts), an English-Russian midwife, is determined to track down the relatives of a newborn whose unidentified teenage mother just died in childbirth. Along the way she meets a suspicious Russian restaurant proprietor (Armin Mueller-Stahl), his perpetually besotted son (Vincent Cassel) and laconic driver and hit man (Mortensen) and realizes the young woman was a victim of a Russian criminal enterprise.

As we settle in for - deep breath here - a murder mystery thriller meets Russian Godfather flick with horror film touches and a possible dark romance between Watts's Anna and Mortensen's Nikolai, we quickly discard our label-seeking urges and just surrender to the originality. The magic of Eastern Promises comes in its uniqueness and unpredictability, its ability to change tone, texture and mode. And sitting there with the movie, we become pleasurably on alert.

And we need to be. Especially for the centerpiece scene, an eight-minute fight to the death in a bathhouse. Caught in a steam room by two knife-wielding Chechen thugs, Nikolai faces them in nothing but a towel and his colorful tattoos. The struggle that follows compels us for its confusion, clumsiness and in-your-face physicality, rather than Hollywood's balletic choreography. When it finally ends, we feel as though we have participated ourselves.

With the constraints of genre, the characters in Eastern Promises could never be as freewheeling and three-dimensional as they are; the exigencies of plot would render them into walking, talking pawns on a chessboard. Instead, Cronenberg and screenwriter Steve Knight (Dirty Pretty Things) are free to probe a deeper psychology.

It's as fascinating for us to discover what motivates Anna to help that child as it is to see whether she succeeds. And we are hypnotically drawn to the enigmatic Nikolai (an unrecognizable, stunningly assured Mortensen), a professional killer with the sang-froid ability to snip fingertips and teeth from a murder victim, yet the compassion to reach out to Anna. During one exchange between the two, Mortensen signals an emotional change within himself with a slight, almost imperceptible shifting of the eyes. That gesture speaks as loudly to us as the barber's blade at the film's beginning. And even though both events seem at textural odds with one another, as if from entirely different movies, we understand they belong together in Cronenberg's film.
Top of this page
Last edited: 30 October 2007 11:33:12