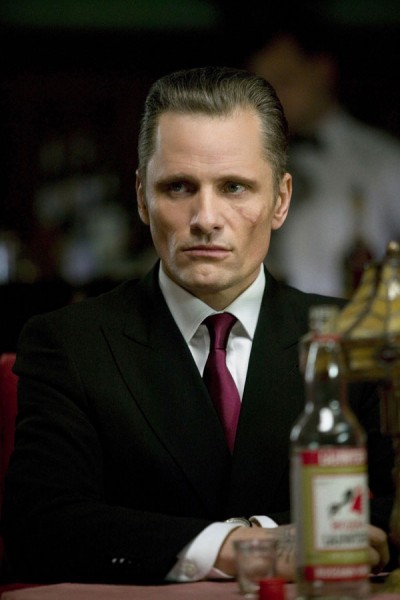 © Focus Features.
Some of the best movies of recent years have stemmed from the terrific partnerships that exist between top directors and their favourite stars, such as Martin Scorsese and Leonardo DiCaprio (The Departed/The Aviator) or Ridley Scott and Russell Crowe (Gladiator/American Gangster). The pairing of David Cronenberg and Viggo Mortensen is also proving to be an irresistible combination.

Eastern Promises marks their second outing and, like A History of Violence, it's a dark, emotionally complex piece of work that's dripping in violence.

The film begins as a man's throat is slashed in a barber's shop and, moments later, a heavily pregnant teenage girl walks into a London pharmacy and collapses onto the floor, blood trickling from her legs.

The girl in question is rushed to hospital but dies in childbirth, leaving midwife Anna (Naomi Watts) to care for the child and attempt to trace its lineage. She does so with the help of a diary that leads her to a Russian restaurant owned by Semyon (Armin Mueller-Stahl).

But her determination to provide a safe haven for the infant eventually uncovers a dark history involving the late teenager, Semyon and his violently unstable son, Kirill (Vincent Cassel) that also brings her into contact with Nikolai (Viggo Mortensen), an enigmatic Mob enforcer and chauffeur who uses the situation to rise through the ranks but who seems to take a shine to Anna.

Working from a screenplay from Steve Knight (of Dirty Pretty Things fame), Cronenberg takes viewers into the murky underworld of the Russian Mafia in deepest, darkest London and proceeds to expose the brutality and (at times) depravity that exists.

As a result, the film can be extremely uncomfortable to watch in places but crucially never feels voyeuristic or exploitative. Rather, Cronenberg creates a sinister underworld that's frighteningly real and where violence lurks around every corner.

In doing so, he offers some fascinating insights into Russian Mafia culture (such as the importance of tattoos) and many of their unsavoury pursuits, as well as some truly electrifying performances.

Stahl exudes menace as Mob boss Semyon, while Mortensen is breathtaking as the conflicted Nikolai. It's without doubt one of the bravest performances by a leading man this year and one that required unflinching commitment to the cause.

Early on, for example, Mortensen is forced to have sex with a hooker in front of his employer in order to prove his manliness, but it's only a taster of what's to come - an astonishingly brutal fight in a steam bath that finds a naked Nikolai having to wrestle two assassins armed with knives. It's sure to become one of the talking points of the year and is evidence of cinema at its most exhilarating.

Unfortunately, Mortensen's performance is such that it threatens to overshadow some of the remaining cast members with Watts, in particular, missing out on any really big moments, and Cassel playing things a little too hysterical early on.

But quibbles aside, Eastern Promises is an otherwise stunning achievement from Cronenberg and Mortensen that leaves viewers drained but awestruck.
Top of this page
Last edited: 29 October 2007 10:22:58