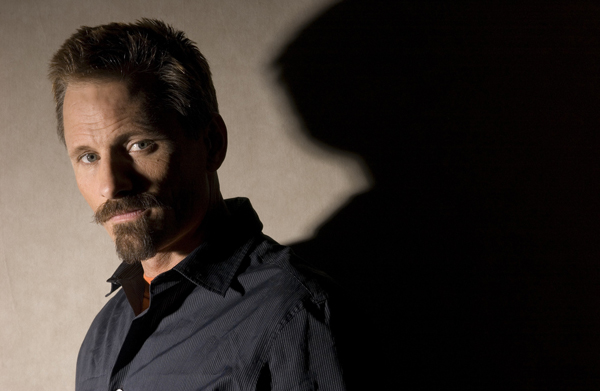 Image Jim Cooper.
© Associated Press.
It's hard to imagine Viggo Mortensen ever switching off. The actor who came to prominence as Aragorn in Peter Jackson's Lord of the Rings trilogy is already thinking about his next role when we meet to discuss his latest, in David Cronenberg's Eastern Promises. Wearing a black shirt and brown slacks, the 50-year-old Mortensen is sporting a moustache that would make a circus ringmaster proud for Ed Harris's forthcoming Western Appaloosa. "I've taken on too much," he groans. "I made a commitment to Ed Harris, and I thought the movie would be done later but it's starting in a week. So there's very little time to prepare. I'm having to push it together quickly, which makes me a little nervous."

Keeping an unlit cigarette in his hand as if to prove this, Mortensen compares the situation to Lord of the Rings, where he was called up two weeks into the shoot to replace the Irish actor Stuart Townsend.

Taking the role on the urging of his then 11-year-old son Henry, Mortensen was evidently confident enough to wing it - although, as he points out, the year-long shoot gave him enough time to ease into Aragorn. Yet coming after 15 years of hard Hollywood graft, even he can't have envisioned how Jackson's trilogy would change his life. Overnight, his relative anonymity vanished. "I'm a person who likes to be alone a little bit every day," he says, "and that makes it harder, to be honest with you."

If that's the negative side, Mortensen knows that without the success of Lord of the Rings, he would never been considered for the lead in his first Cronenberg film, 2005's A History of Violence. Casting him as Tom Stall, a mild-mannered family man with a secret mob past, it smartly subverted the heroic image Mortensen had further perpetuated after Lord of the Rings with 2004's true story of a Pony Express rider, Hidalgo. The actor, however, sees a connection between the roles. "Any character I play, I always have secrets," he says. "Even Aragorn, he has secret fears and doubts, which you may not always see but you maybe feel."

Set around the Russian mafia in London, Eastern Promises also plays on this theme of concealment. Mortensen plays Nikolai, a driver-cum-bodyguard for the infamous real-life vory v zakone crime family, who gradually plots to assume power. "The flip-side of Tom Stall," says Cronenberg, Nikolai is also burdened with secrets, though not in the same way according to Mortensen. "I don't think he's deceiving himself. I think he's quite clear on who he is, where he is, what's at risk and what his motives are." It's a watershed role for Mortensen and, such is the commitment he offers, it's not too rash to compare his performance to Robert De Niro's Oscar-winning turn as the young Don Corleone in The Godfather Part II.

Like De Niro, who famously went to Sicily to pick up the particular regional dialect of his character, Mortensen absorbed as much Russian as he could for the role. "If Russian is spoken, then I'm going to go to an extreme as far as my contribution to make it work," he says, admitting he would leave Russian cable TV shows on in the background at home and listen to language tapes as he went to sleep. He also spent two weeks in St Petersburg and Moscow, riding the underground to observe the locals, before heading to the more rural area of the country, near the Ural Mountains from where Nikolai hails.

Mortensen's obsession with getting things right extended to giving Cronenberg a copy of the documentary The Mark of Cain, an investigation into how Russian prison inmates decorate their bodies with tattoos that boast of their crimes. As a result, this was incorporated into the story, with Nikolai covered in no less than 43 tattoos. So realistic did he look, Mortensen recalls, that when he walked into a London pub he was met with looks of terror on the faces of several Russian youths. "It was good that they saw them and thought that they were real," he says, grinning.

With an "H" - for "Henry" - tattooed on his wrist, Mortensen evidently understands this idea of applying "war paint", as he calls it, to mark out significant life moments. The way he talks about Nikolai, his body art is part of an almost "monastic" commitment to a life of crime. "When you see the character sitting alone, he's like a monk. It's like you've given up things of this world for other purposes, to serve something bigger than you. It just happens to be something scary." It's little wonder Mortensen can relate to a character so totally devoted to his profession. It's not the first time he's done this - on Lord of the Rings, he'd fish and camp in the woods to stay in character.

Given all this, it's no surprise to learn that Mortensen is single. He was married for 11 years to Exene Cervenka, a former actress and lead vocalist for the punk band X, whom he met on the set of 1987's Salvation!. They split in 1998, the year Mortensen's career really began to accelerate after appearing as Gwyneth Paltrow's lover in A Perfect Murder and Marion Crane's boyfriend in Gus Van Sant's Psycho remake. Since then, perhaps because of his loyalty to his work, he admits it's been "difficult" to keep personal relationships on the boil. "There is no guidebook," he says. "I definitely need to take some time off, just to attend to personal matters and family. I'm doing a lot of things on the fly now and it takes its toll. Just physically you get tired, too."

Henry is now "out of the nest", and studying at university, and Mortensen beams like a typically proud father as soon as his name is raised. "I'm always impressed by how much be knows or how much he retains," he says, admitting he sees them both as quite similar. "I would say that the first quality comes to mind, which I think is generally a positive one, is that we're both self-reliant. He can entertain himself and he likes his own company. He's good at drawing. He's very creative. But he's probably more socially mature - or adept - than I was at his age. I was much more by myself. He also has lots of friends and likes to socialise. I just wasn't interested in that. In fact, I had an aversion to that."

Such a self-imposed isolation doubtless stems from Mortensen's own rootless, troubled upbringing. Born in New York to a Danish father and an American mother, he was 11 when his parents split. By this point, he had been living in South America for most of his life. After his parents divorced, Mortensen and his two brothers went with their mother back to the US. "We arrived in Northern New York near the Canadian border, and there were no Spanish-speaking people at all, one black person in the whole county, some French-Canadians, and no tradition of football. It was just completely different. But when you're kids, you adapt very quickly. Within a month or two, I knew all the swear words."

After graduating, Mortensen spent some time in Denmark, reconnecting with his Nordic roots, before returning to New York. There, he found work wherever he could, before he hit upon acting. His first proper role was as a young Amish man in Peter Weir's 1985 film Witness. Yet it wasn't until the 1990s that he began to be appreciated. He took the co-lead in Sean Penn's 1991 directorial debut The Indian Runner, was a coke-sniffing double-crosser opposite Penn in Carlito's Way two years later, and then Nicole Kidman's suitor in Jane Campion's The Portrait of a Lady.

At the same time, Mortensen was winning plaudits for his other creative endeavours, including photography, poetry and painting. He's published several books via his own company Perceval Press. He's equally outspoken politically, once turning up on a chat show wearing a "No More Blood For Oil" T-shirt. He was also critical of the Bush regime for the bungled handling of the Hurricane Katrina disaster operation. "I wasn't alone in that," he notes. "The present government... they don't have a real work ethic or a social conscience. They act like sociopaths."

With his next film Good, about the rise of national socialism in Germany, already in the bag, Mortensen must now face time in New Mexico on Harris' Appaloosa, in which he plays a trouble-shooting sheriff who brings order to an unruly town. Already, he has been communicating long-distance about his costume and chewing over his accent. "I've figured out where he's from. I know he's from the North-east. He's not the usual cattle-poke."