From Russia With Loot 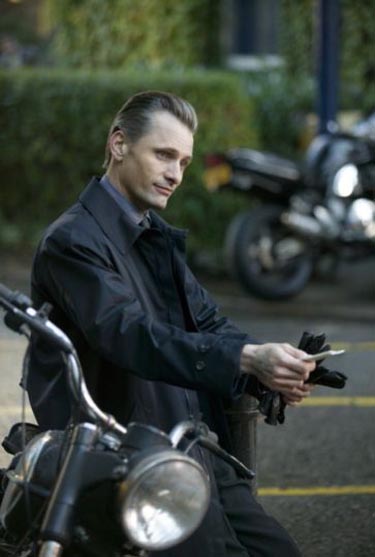 © Focus Features.
If you thought Viggo Mortensen struck an impressive figure in The Lord of the Rings, warding off orcs as easily as wooing Liv Tyler, then you will be stunned by his facility for fighting and romance in David Cronenberg's Eastern Promises.

But it's not for his co-star, Naomi Watts, that he gets naked in its now-famous scene. As he takes on a pair of Chechen thugs with knives in a Russian bathhouse, his towel quickly goes flying, leaving him to fight to the death in the altogether.

Nudity is not a huge concern for Mortensen, who today - as always - struggles to keep his shoes on during our interview (but is fully clothed otherwise).

"The bathhouse fight, there's nothing glamorous about it. It's not the most flattering way to be seen in a lot of ways," Mortensen chuckles, even if to adoring viewers the youthful and fit 49-year-old looks steamy onscreen.

"It was an important scene because it reveals a lot to my character and to the audience. Not having clothes, not having weapons, not having anything but a bunch of tattoos, makes it a much more vulnerable situation. Although it's a small part of the story it has a considerable impact."

Mortensen considers himself a citizen of the world, a rare American who speaks numerous languages and spent his early years in Argentina.

"Well, ideally, everybody's a citizen of the world," he says.

Naturally, when he came to make Eastern Promises, which looks at the Russian mafia in London in the way that his previous Cronenberg collaboration, A History of Violence, examined violence in America, he took on the Russian lingo and even travelled to Russia.

"There's more Russian spoken in the movie than in Steven Knight's original screenplay," he says. "David wanted to give the feeling that you're glimpsing into a secret world. It's like with The Lord of the Rings - when you hear people speak Elvish it just adds an exotic otherness to that culture."

As Nikolai, a brooding driver for the mob, Mortensen is the undisputed star of Eastern Promises, a film with many twists.

"As a moviegoer I like to be surprised, to be involved and unsure where the story is going, and that certainly happens here," Mortensen says.

"When choosing movies I don't look to play a heroic character, in fact if he is supposedly a terrible person, my first question instinctively is, 'When is he not terrible? And why do you say he's terrible?' I always look for the contradiction in any character, big or small."

Those factors come into play with Nikolai. If the cinematic world has any justice, Mortensen should receive an Oscar nomination next year for his performance.

In fact, his sharp, shiny suit and coiffed hairdo should win an award all of their own. Then there are his Russian criminal tattoos: it took the film's make-up team four hours to apply 43 of them. Mortensen researched the distinctive body art extensively and found they provide a lot of information.

"Where the symbols are placed on the bodies tells your occupation, what your specialities are, where you've done prison time, what ethnic group you're from, what part of Russia you're from. They're coded messages: you are the message, your body is your calling card. That was interesting and was something that became an integral part of this story."

He praises Watts, whom he had never met before making the film, for delivering an equally transformative performance as a dowdy British midwife trying to save the baby of a dead prostitute.

Still, his highest commendation goes to Cronenberg for his distinctive take on the horror genre, which here is more about the body than ever.

"I didn't expect after so many years of working in the business that I'd work with David Cronenberg, much less twice in a row," he says. "Obviously I'm very grateful for having been in The Lord of the Rings, otherwise working with David would not have happened."

Does he think Peter Jackson should direct The Hobbit?

"I would suspect that anybody's choice in their right mind would have to be Peter," Mortensen says. "But you never know, it's a strange business."
Top of this page
Last edited: 28 October 2007 10:02:51