Source: Indie London
David Cronenberg about directing Eastern Promises, working with Viggo Mortensen for the second time in succession [after A History of Violence] and the relevance of using a knife to kill someone, as opposed to a gun...

He also discusses finding some surprise London locations during the shooting of the film, why he gravitates towards darker material in his filmmaking and why the Litvinenko case had some relevance to the shoot... 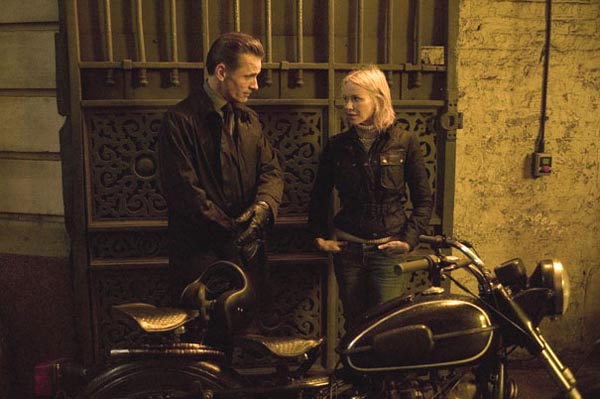 © Focus Features.
What was the process by which it came your way and how did you react to the screenplay when you first read it?

David Cronenberg: It was a very traditional thing. My Hollywood agent sent me the script... he usually gets very frustrated because I hate everything they show me. So, they dig around in obscure corners for me and in this case the obscure corner was BBC Films [laughs]. I really loved the script but it didn't feel like something I would go and shoot straight away. It felt like the first draft which, in essence, it was. But I was very interested to talk to Steve [Knight, writer] and the producers about what we might do to make it into a movie.

I gather Viggo Mortensen almost became Russian for this role. Does it surprise you the level of commitment he brings to the role?

David Cronenberg: I knew Viggo's method from working with him on A History of Violence and he does a lot of research - but also with a great sense of humour. He takes the work very seriously as a professional but it really is fun if you do it right. It doesn't have to be anguished. So I wasn't surprised at what he did. That's what's exciting about working with someone a second time - you understand each other's creative process and you can start almost at a higher level because you've done all that. You don't have to put any energy into it, you know that, so you just get going. It's almost as though you're in third gear instead of first gear.

But the way Viggo does it is not what you would think if you think "method actor". He didn't ask us to call him by the character's name all the time. After "cut" he's still Viggo and you can still joke with him. But he really surrounded himself in his trailer with Russian stuff. If you go into his apartment you'll find the tables covered with research materials and pictures on the wall. He also has little things that he keeps on his body that remind him of the character. But it's all done in a very light way. It's not heavy or silly, it's very natural and very organic with him.

Can you talk about the fight scene in the sauna? Why did the thugs use knives? Is it a way to symbolically damage the tattoos?

David Cronenberg: Well, Steve's script had no guns in the movie, although I think that's not accurate now. There was a time, of course, when the Bobbies in London famously didn't carry guns because there was a kind of understanding with the criminals that nobody would use guns. That's long gone, of course, there are guns everywhere. But I did like the knives though because to kill someone with a knife is a very intimate, perverse act. With a gun, even if you're just a couple of feet away from a person you can distance yourself and you don't really have to experience it. But if you kill someone with a knife it means that you feel them, you smell them, you hear them breathing and you're right there. It has a more terrifying effect on the people around whoever you've killed that you would do such a thing - that you would be that intimate.

That's obviously why beheadings seem to be such a terrifying thing to people in the west, even though dropping a bomb on a village will kill a lot more people a lot more quickly. So, it's a psychological thing that they'd do deliberately. This is me interpreting what Steve wrote, of course...

But then I chose those knives because they're actually not exotic; they're carpet knives, they're very cheap, you can buy them anywhere and you can throw them away and you can't identify them. I felt that if these characters were stopped on the street by police and found to have knives, they could say they were carpet layers. So, all of those things were in my mind. But you're quite right, these criminals also work on the level of symbols and lessons to be taught and they would be destroying the tattoo pattern on his body with those knives and it would please them to do that. It would also leave a message for other people that betrayed them that they were not to be messed with. All of those things made it more potent, despite being less efficient.

Did it surprise anyone that Viggo was quite so committed? I imagine some A-list actors may have thought twice about being quite so naked for so long?

David Cronenberg: Yeah, it's unusual for stars of some magnitude to do that but he's an actor; he doesn't really consider himself to be a star. It was obvious that the level of reality we'd established in the film would make it silly, for example, if I'd shot it in a very obscure way when I hadn't done that with the rest of the movie, or if the towel miraculously stayed on and didn't fall off! We were just thinking: "This is what the scene demands within the context of the movie, so we've just got to go for it."

And can you tell us about the casting of the two older guys who are sat in the sauna during the attack?

David Cronenberg: [Laughs] That's interesting... the skinnier of the two is Peter Mountain, who is the set photographer and stills photographer, and the larger bearded man is Andrew Jack, who was the dialect coach, but also an actor. I just thought they were a great couple and I wanted to get them in the movie. They did very, very well - although their towels did not drop, it's true.

Did you ever feel that real-life ever intruded? That there were ever any shifty characters visiting the set?

David Cronenberg: Well, we hired those people, so they were on our side [laughs]. No, we did have a lot of extras who were Russians. The old ladies in the birthday scene were all Russians and they surprised me by starting to sing along with the accordian player. I didn't know they were going to do that but it was really quite beautiful and one of the things that was wonderful about getting as many Russians on the set as we could. We also had some of the guys playing bodyguards and drivers who said that in real life they were bodyguards, drivers and bouncers - but they wore Armani and drove Mercedes. So I think we were getting some subliminal consultation even though it wasn't directly Mob related.
But really, over the internet, we've discovered that we get two thumbs up from Russian criminals - we're not sure whose thumbs they are! But that's because they are criminals so they don't mind being depicted as criminals, they just want to make sure that you're not making fun of them and that you get the details right. We did all that, so apparently we're OK with the Mob.

Eastern Promises is a London-based movie and yet there's not many shots of Tower Bridge, or Big Ben or places like that. Was it quite hard to find the kind of sets and looks that you wanted?

David Cronenberg: No, there's more of that in London than those other things. We had a wonderful location manager who was really quite important because he knows a lot about London - more than anybody else - and he could, based on the script and where these characters would live, tell us what sections of who lived where and why, or who was encroaching in that part of town; who used to live there and why it shifted, immigration patterns and so on... We wanted to get that right too - even something just as simple as the young Turk would be an Arsenal fan as opposed to a Chelsea fan.

A lot of things connect with locations that you wouldn't think of as locations in terms of the nature of the people who live there. So, it was very exciting to explore London that way and the crew, who were all Londoners, were pretty excited to be shooting there instead of Notting Hill. To them, it was the real London and the London they knew themselves. There are also some surprises for Londoners as well. I've been interviewed by a number of people now who say they didn't even know some of the places existed, such as the water gate where the body is dumped. It's a pretty unique place - very historical and very significant but not too many Londoners really have ever been there.

Did the Alexander Litvinenko have any sort of impact on you guys? Weren't you close to where the poison trail was detected?

David Cronenberg: When we started the movie, the Russian Mob in London was a fairly obscure subject. But by the time we finished it, it was front page news all over the world because of Litvinenko. That happened halfway through the shoot and literally half a block from Vincent [Cassel], Viggo [Mortensen] and my own front doors, was a building owned by the oligarch [a business leader who wielded considerable political influence] [Boris] Berezovsky.

One day when we went by there were police in hazmat suits and a forensic van who were finding traces of polonium and radiation poisoning there because Litvinenko was a friend of Berezovsky and they had obviously met there and something had happened. Likewise, the Itsu on Piccadilly was closed for renovation, except there were police guards around it which is unusual for renovations, and they'd found tonnes of radiation poisoning there - and that also was right very close to where we were living...

But being the crazy people that we are, this rather excited us. It didn't scare us or make us nervous. We were thinking: "Well, this means that we have our finger on the pulse of something that's quite current, intense and significant - the emergence of Russia as this post-Soviet power again and the ripple effect that it has all over the world. Suddenly, we were feeling that directly. Even though the plot of the movie is not exactly that it felt relevant.

Why do you make such dark films in general?

David Cronenberg: I think they're all funny [laughs]. It's a kind of a balancing thing. Most artists are interested in exploring places that are not normally explored. It's a matter of curiosity for one thing and I think there's always the feeling that you will discover something significant or profound about human nature, or the human condition, if you go to those places as opposed to the more mundane, everyday places that we all know. Not that really wonderful situation comedy or domestic drama can't be very revealing about things as well but I think artists have the desire to uncover things that are hidden. You don't want things to be hidden. You want to know what's really going on, so you dig after what's really going on and that often leads you into dark places because when there's no light things happen that are hidden.
Top of this page
Last edited: 25 October 2007 14:59:45