Viggo The Sponge: Actor Soaks Up Everything 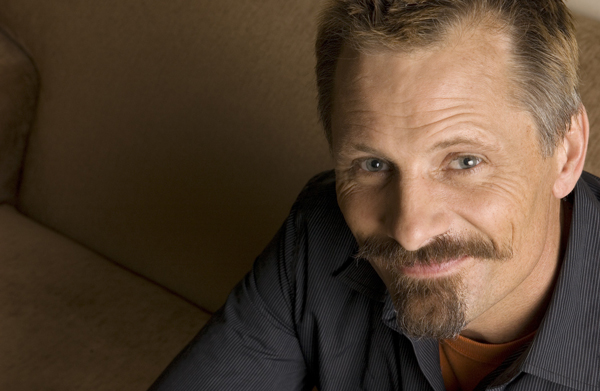 Across the street from his Manhattan hotel, he notices a man on a balcony and wonders aloud what the man is doing, what his life is. The moment makes him ponder, "What does that mean?"

"Basically, I think life is relatively short," Mortensen concludes. "We're not here that long and I think we're lucky to be here.

"And it makes sense to pay attention."

A conversation with the 48-year-old star of the acclaimed new film Eastern Promises is likely to include such philosophical musings, delivered in Mortensen's characteristic even, almost hushed tone. The man many know as Aragorn from The Lord of the Rings trilogy is about as opposite as possible from a Middle Earth warrior - an enigma wrapped in a Mets T-shirt.

That's what Mortensen was wearing beneath otherwise stylish duds at a recent interview, where he made it clear that Eastern Promises - his second collaboration with director David Cronenberg, after 2005's A History of Violence - constitutes a major development in his life and career.

"It's been great for me as an actor, as an artist, in my personal evolution, to work with him," says Mortensen. "I know that David Cronenberg helped me do things, sometimes very subtle things, in a way that I hadn't been helped to do by other directors."

Critics have lauded Mortensen's performance as Nikolai, a low-level but rising Russian mobster living in London. Nikolai - who only speaks Russian or heavily accented, broken English - develops a relationship with a midwife (Naomi Watts) who's seeking answers behind the death of a Russian teenager and the baby girl she left behind.

The character is in some ways similar to the one Mortensen played in A History of Violence; both harbour secrets and have docile exteriors that hide a talent for mayhem.

Eastern Promises won the audience award at the Toronto Film Festival last Sunday, creating some of the first Oscar buzz of the fall movie season. For both actor and director, it's a creative high point.

"We're working at the top of our game," says Cronenberg. "I certainly don't think I can do better."

Mortensen hardly speaks about anything but his admiration for Cronenberg. If he was a politician, his only talking point would be: David Cronenberg is a master of cinema.

"After working with him not once but twice, I know that there's just not too many directors out there like him," says Mortensen. "He is one of a handful of living masters."

For his part, Cronenberg playfully acts the jealous lover, who's spurned each time Mortensen makes a film with another director.

"There's a real intellectual and emotional camaraderie," says Cronenberg. "What that means is, we can start at a much higher level the first moment that we're doing a project."

Two of the film's trademark details came from Mortensen, who Cronenberg calls a "demon researcher." The actor stumbled upon a book called Russian Criminal Tattoo, which details how jailed criminals in Russia have symbolic tattoos that tell their life story. Cronenberg quickly had screenwriter Steve Knight (Dirty Pretty Things) incorporate them into the film.

The tattoos covering Nikolai are evident during a knife fight inside a bathhouse, a four-minute scene that has become the film's signature sequence. Before shooting it, Mortensen (whose character was to be draped in a towel) told Cronenberg, "It's obvious. I have to do this naked." The result is a terrifying wrestling match where flesh and blood are juxtaposed against sterile ceramic tile.

Mortensen was particularly fond of one tattoo which read, "The important thing is to remain human." For him, that means much more than being a movie star.

He's a photographer who has held exhibits around the globe, the founder of art book publisher Perceval Press, a pianist with a forthcoming classical CD titled Time Waits For Everyone, a painter and a poet.

Mortensen generally shuns the flashy Hollywood lifestyle; he even declined a 2004 invitation to join the Academy of Motion Picture Arts and Sciences. Instead, he immerses himself in roles.

The actor dragged his sword everywhere with him while making Lord of the Rings and took a road trip through the Midwest in preparation for A History of Violence. For Eastern Promises, he spent several weeks in Russia researching his character.

Each experience usually results in a book of his photography published by Perceval, and sometimes - as with 2004's Hidalgo, the horse-riding action flick - an adopted equine.

Like a sponge, he seems to soak up everything wherever he goes. That may be a product of Mortensen's upbringing, which was spread out across New York, Denmark and Argentina.

His first break in movies was in the 1985 film Witness. Small parts followed, but he began showcasing his ability in Sean Penn's The Indian Runner (1991), Brian De Palma's Carlito's Way (1993) and two 1998 Alfred Hitchcock remakes: A Perfect Murder and Psycho.

He was cast at the last moment for The Lord of the Rings when Stuart Townsend was jettisoned, having been judged too youthful to portray the world-weary Aragorn. It's a quality Mortensen seems to specialize in, as he showed in Hidalgo and both Cronenberg movies.

Is it a characteristic Mortensen himself shares?

"Sometimes. It's hard not to get depressed when you pay attention to the world and how strangely and corrupt the people in it sometimes behave," replies Mortensen, who has never shied away from political dialogue.

Mortensen recently finished shooting Good, about a professor who becomes enmeshed in debates on euthanasia in 1930s Germany. He'll soon begin production on the Ed Harris-directed Appaloosa, and has been reported to be in talks to star in the adaptation of Cormac McCarthy's The Road.

It seems clear that Mortensen has declined the career of a blockbuster movie star, which was available to him after Rings and Hidalgo.

"I have higher expectations of other directors having worked with him," says Mortensen. "I can't really expect that I'm going to run into another person as gifted as him, but that doesn't mean I can't find other stories."
Top of this page
Last edited: 14 October 2007 13:46:54