Source: Diario de León
Director again goes in depth into the dark side of human nature. 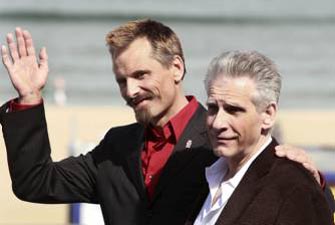 © Diario de León.
Wearing a deep goatee and moustache, the actor Viggo Mortensen arrived yesterday to the press conference of the 55th Edition of the San Sebastian International Film Festival, with director David Cronenberg, to show us their latest work together: Eastern Promises, a thriller about the Russian mafia, that has been a prizewinner at the Toronto International Film Festival and is getting lots of praise from the Spanish critics. The director of A History Of Violence, with which this film has a lot of things in common, and that competes with Wayne Wang, John Sayles, Gracia Querejeta and Icíar Bollaín, said during the press conference that what he was trying to show in the film was nothing more than: "the reality of violence, that is not a cinematographic fact but a human, physical fact. Violence is the destruction of the body and, for the organized criminal, is a way of life at the same time, the murders are a business, and this is what fascinates me."

An Oscar for Viggo

The Canadian director stated, jokingly, "If Viggo doesn't win an Oscar for this film, we won't work together again."

On the other hand, the American actor, who was very laconic during the press conference, answered that he didn't know whether he would win an Oscar or not "as, he said, I don't know a lot about prizes, the only thing I know is that this is really a good film." One of the journalists asked him if he knew that Eduardo Noriega, a filming partner in Alatriste, was one of the members of the jury, and Viggo stated: "I hope that this fact doesn't have any influence in his final decision."

Viggo was wearing in his lapel the León badge, something that he had done before in Toronto and New York, during the film's screenings. Here in San Sebastian, when one of the journalists shouted at him "I'm from León", Viggo handled the badge and showed it proudly to the public. It seems he is keeping the promise he made in the last sentence of the speech he made after receiving the title of adopted son of the city last October 2006: "I'll return to León whenever I can, as León will continue being the heart of Spain for me."
Top of this page
Last edited: 14 October 2007 10:45:54