"Although I will never be another person, it's nice to try"

By Teresa Sala - translated by Graciela 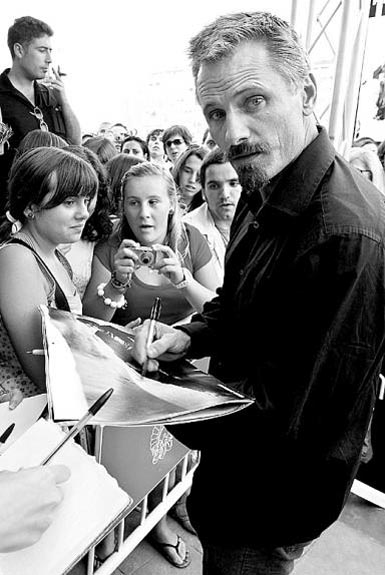 Viggo Mortensen signs autographs in San Sebastian.
© EFE.
A packet of Ducados, yerba mate Rosamonte and an open window. Viggo Mortensen turns the interview into a conversation before we start asking the questions. "You saw the movie, didn't you?" His Buenos Aires accent makes things easier. He says that Eastern Promises, which will open October 5th, is "a good movie", because "it will make you think and talk a lot." He is Nikolai Luzhin, the driver for one of the most important organized crime families in Eastern Europe. For a second time, he was directed by David Cronenberg.

Would you say that this movie puts you back into a darker type of cinema?

I hadn't thought about it like that. It's not only dark, it's very different from Lord of the Rings, but I always try to find all the different sides and nuances that I can in any character. I think you never get to fully know another person or yourself. People are very strange, and Cronenberg is one of the best observers of human psychology, he is almost like a scientist.

Did your character have something of you? Has any aspect of Nikolai stayed with you?

I don't know. When you act, you always use your body, your face, your voice and your mind. And your point of view inevitably gets filtered into what you are doing. Even though I will never be another person, it's nice to try; to look at the world and react in a way that has to do with adapting to somebody else's point of view. That's the fun for me. I learn things that, either because I am lazy or because I haven't had the opportunity, I wouldn't learn. I go to places where I would never have gone, like a Russian town where I observed the people. It's about paying attention in a more detailed way. To realize why they laugh, how they eat their soup, why that child looks at me in a certain way, why they walk so much.

Apart from visiting Russia, what kind of research did you do?

Before traveling I had already learned what I needed to learn in order to speak Russian in the movie and to speak English with a strong Soviet accent. I was pretty much ready to start shooting, but when I arrived in Russia, I was better able to find the tone of the character, and I saw many things that cannot be put into writing. I like to do an in-depth preparation, just like David, then throw that out of the window and count on what is left in the subconscious. You have to count on what you have done and think that it will be there. There is no need to worry if you have prepared thoroughly.

When you prepare a character so thoroughly, isn't it hard to get rid of it in real life?

I like it. I understand that there are actors that have a hard time getting rid of some characters after having prepared them in such depth, but I don't mind. When we get old, we are going to forget many things; why hurry to forget things that have taught us something? I am never in a hurry (for that).

The violent scene in the sauna, in which you are naked, is very harsh.

David takes violence and its consequences very seriously. It is not something nice, it is terrible, and for that reason, very serious. I don't want that scene to stand out for the wrong reasons; I wanted it to look as real as the rest of the movie and that's why we decided that I should do it naked. For obvious reasons, I knew that I wouldn't be able to cover my body and that it would hurt a bit. I asked if they could do it as fast as possible, and he is very efficient. I did not think too much about the fact that I was naked, although at times I did feel a bit weird, vulnerable and uncomfortable, but not more than the character had to feel. The movie is more about the possibility of some sort of violence than about violence itself. The scene is tough, but it is necessary, the character learns and so do the public.

Is it more comfortable to shoot this type of scene with Cronenbreg?

I completely agree with working in this type of movie scene with David. In general, when directors show physical violence they protect their audience, they create a veil, a protection that has to do with the way they use the camera. Aesthetically, they are concerned with things that have nothing to do with violence, because violence is terrible, and it has terrible mental and physical consequences. David shows it just as it is because he takes it seriously; I think he is one of the most responsible and honest directors in terms of aesthetics. There are only a few minutes of violence in the movie, but they strike you because there is no protection, it's very real.

The movie leaves you with a lot of questions.

When a movie is done well, it gets people talking and thinking. People have told me many things about this movie, and the fact that they want to talk about it means that they are interested. The good thing about A History of Violence (2005) and Eastern Promises is that when the movie is over you have lots of questions and lots of ideas too. You don't have answers, I don't have them; and David, as a director and artist, respects the public and he doesn't provide any answers either. It leaves you with a lot of questions and with the feeling that you want to see the movie again. In my opinion, that means it is a good movie.

Have you been attracted to any Latin-American projects lately?

There have been some offers but I haven't had the opportunity for them to materialize. Since I speak Spanish it would be easy to do it. I liked working in Spain a lot; I like the way they shoot, how you can have some fun while at work. Even though Cronenberg is not Latin-American, he is very smart and very creative, but also very relaxed. He takes his work very seriously, but life goes on during shooting and we have a good time with him, that's why people keep coming back to work with him.
Top of this page
Last edited: 3 October 2007 11:13:13