Viggo Mortensen On The Top Of Hollywood

Source: iBYEN
Danish Connection: While Viggo Mortensen's father is Danish and he still has a big family on Midtsjælland, David Cronenberg also has a Danish connection. In 1966 he lived for 9 months in Copenhagen, working as a Viking on the Strøget, "with a sword and horns on a helmet" as he revealed, "holding a sign referring to a Danish sweater market in one of the side streets." 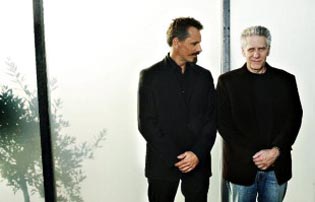 Image Thomas Borberg.
© iBYEN.dk.
It already smells like an Oscar in connection with David Cronenberg's and Viggo Mortensen's new thriller Eastern Promises, which is premiering on Friday.

"You can call it a pact. David and I have developed a collaboration that suits us both perfectly. And as soon as we had finished filming A History of Violence, he asked me if we should do another movie together. I know he considered a few more manuscripts, but that he chose Eastern Promises because I fitted the role as Nikolai Luzhin."

The words come quietly from Viggo Peter Mortensen Jr. And even if he doesn't visit Denmark that often, his pronunciation and sentence structure is, as always, impressively correct this morning at the Hotel Sct. Petri in Copenhagen.

It is here we meet Viggo Mortensen and the Canadian director David Cronenberg who are in Denmark to present their movie Eastern Promises that is having its Danish premiere tomorrow.

And the two of them can be proud of the chilling thriller about the Russian criminal brotherhood Vory V Zakone. The movie has already won the People's Prize on the Toronto Film Festival this month, which is normally a hint for later Oscar nominations.

"I hope that David receives an Oscar. Because even though A History of Violence was the best movie in 2005, he wasn't even nominated. I think that was a shame, since the more times you watch A History of Violence the better it gets. Not many movies can brag about that. But luckily the Danish critics have an eye for that, so David received a well earned Bodil last year," says Mr. Mortensen who most Danes has adopted and refer to as Viggo.

Danish Dynamite Per Excellence In Hollywood

It may say quite a lot of our self-perception as a pocket state that pretty much all the Danish media in the past week have praised "The Half Dane", as he is the Danish dynamite per excellence in Hollywood.

But Viggo Mortensen carries part of the blame because of his down to earth attitude and constant marketing of his father's birth country, and even a Canadian Master Director falls for that.

"When I read the script for Eastern Promises, I immediately thought of Viggo as Nikolai. Even if I see him as an American actor, he has this very special European sensibility that - paired with his South American glow from his Argentinean background - makes him universal. He can walk into almost every role. As, for example, as a Russian in this movie," says David Cronenberg.

"And then he has a good ear for language, which in reality is an ear for music since he is also composing music. To make a Russian accent in English is extremely difficult. Many actors have failed during the years. But Viggo does it convincingly. At the same time he is a good person and a good friend, who is generous to all and everyone, makes him a gift for every movie. That is why I want him in every one of my movies" says the Canadian director.

Eastern Promises tells the story of the mysterious and charismatic Nikolai Luzhin, who is a driver for one of London's most organised criminal families. This again is a part of the feared, Russian Vory V Zakone brotherhood.

His life is suddenly shaken when he meets the beautiful midwife Anna Khitrova (Naomi Watts). Anna has come into possession of a dead patient's diary that draws dark threads into the Vory V Zakone brotherhood and consequently the employer of Nikolai. Soon Nikolai does not know who to trust. And he must realize that his own life is in danger.

A Church On The Back

As part of the preparation for his part, Viggo Mortensen has been in contact with some members of the Vary V Zakone brotherhood.

"I have had meetings with people in the States that have been in prison in Russia. They taught me street-slang and the special prison language they use. And they gave me addresses of people in Russia, who I visited. Also criminals deeply involved in the brotherhood, who, for example, could tell me how my tattoos in the movie should be. Tattoos play a big part in the brotherhood and consequently also in the movie. For example, I had a huge tattoo of a church on my back. The number of the spires tells how many times you have been to prison," the 49 year old actor tells us.

No Danish Movie On Its Way

He would very much like to participate in a Danish movie but he does not think it is realistic in the coming years as he is busy doing movies in America. And also because he wants time for his work as a painter, photographer, poet and musician.

"I have just finished filming Good in Hungary and will soon start shooting a western (Appaloosa, directed by Ed Harris and with the director himself and Renée Zellweger as fellow players.) And there is something about a screen version of a Cormac McCarthy novel, The Road. And I have promised myself that I do not want engagements that stretch farther than Christmas 2008. That is why a Danish movie can be hard to place in this schedule."

"Also because right now I plan a large exhibition of my photographs and paintings in Roskilde next year. I will be in Denmark around that time again and then we can talk about the prospects for a Danish movie" says Viggo Mortensen.
Top of this page
Last edited: 1 October 2007 15:45:13