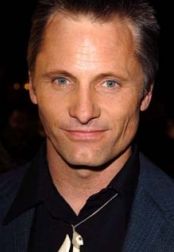 While the original jingle was, of course, about the famous Mr. Ed instead, it may be time that the song was amended to refer to an even more impressive equestrian force. Hidalgo was a spirited mustang with such an intense communication with his rider, Frank T. Hopkins that he was able to help successfully lead the cowboy to an 1890 victory in a punishing race across 3,000 miles of the Arabian Desert, called the Ocean of Fire.

For the new feature film Hidalgo, five horses were enlisted to play the title character at different points throughout the film's shoot, but no matter how attention-getting these hoofed performers may be, the real draw for mainstream audiences will likely be the human actor chosen to play Hopkins.

Coming off of the recent Best Picture Oscar winner The Lord of the Rings: The Return of the King, not to mention the two Lord of the Rings films that preceded it, Viggo Mortensen has finally achieved star status after years of being a noteworthy character actor. Playing Hopkins - the emotionally conflicted son of a cowboy father and a Native American mother who fights not only to survive, but also to accept his ancestry - gives Mortensen a chance to flex both his dramatic and box-office muscle.

Popcorn movie maestro Joe Johnston, the director of such hits as Jumanji and Jurassic Park III, has turned the legend of Hopkins and Hidalgo into a transporting, grand-scale epic, one anchored by the rough-and-tumble humanity that Mortensen brings to any role. Johnson chose the actor after seeing his performance in the romantic indeed A Walk on the Moon, but once he caught up with Mortensen's work as reluctant-then-triumphant king Aragorn in Peter Jackson's Lord of the Rings trilogy (two of the three films opened in theaters after Hidalgo had already been cast), he realized how fortuitous he was in nabbing the performer.

'I was amazed when I did see the Lord of the Rings films, because it almost seemed like a different actor playing a different character,' Johnston says enthusiastically. 'He made a complete transformation. Now, I know him [specifically] as Viggo Mortensen playing Frank T. Hopkins. When he takes on his next role, whatever that is, he'll probably become unrecognizable to me. He'll make another transformation.'

Screenwriter John Fusco (Young Guns, Thunderheart), who brought his vast knowledge of the American West and Native American culture to Hidalgo, agrees about the casting, adding, 'It was one of those things that, once it's done, no matter how much you try, you can't recast it in your mind. He really became the character. People say that all the time, but with Viggo, it's really true. And all that stuff they say about him - "No-Ego Viggo,' "he's not a star, he's an actor,' - that is so true. He's such a class act.'

Living up to this golden reputation, Mortensen arrived to the Hidalgo interview bringing gifts - two published books featuring photography he has done - for grateful journalists. After dispensing with the freebies, the actor was quick to praise Johnston's neo-classical approach to the adventure-movie genre.

'A lot of big-budget movies tend to sometimes overdo it, in terms of crossing the it's and dotting the it's, making sure in the marketing and in the movie itself that "this is good, this is bad, pay attention to this,'' the actor explains. 'The strength of this movie, for me, was that, because of Joe Johnston's old-fashioned approach to telling the story-in terms of moviemaking, it was more like a Howard Hawks approach- this movie doesn't do that.'

Johnston admits that the movie almost wasn't blessed with his particular craftsmanship, since the script arrived on his doorstep when he was feeling burned-out. 'I wasn't anxious to go back to work after Jurassic Park III,' the director remembers. 'It had been about six months, and I was still in recuperation. But [the film's producer] Casey Silver sent me the copy of this, and he said, "I got this great script I want you to read,'' the director continues. 'I said, "I don't want to go back to work.' So it sat on my desk for about three weeks, and I didn't want to look at it because I was afraid I'd like it. And then I started reading it, and I couldn't put it down. I called [Silver], and I said, "damn you.''

Part of what coerced Johnston to emerge from his hiatus was how universal Hopkins' character arc was. 'The story of Frank, who is denying who he is, and has been for most of his life, and his coming to terms and discovering who he is because of this thing he goes through-that's something that's basic to human nature, and something we can all relate to,' Johnston says. 'That story should work if you take it completely out of context, and put it in any genre, any kind of film. It doesn't have to be this big, epic action-adventure film for that kind of story to work.'

While everyone involved with Hidalgo attests to the harmonious nature of the production, the film has stumbled upon a couple unexpected pockets of controversy shortly before making its release date.

A book by Basha O'Reilly and CuChullaine titled Hidalgo and Other Stories by Frank T. Hopkins has recently come out, and its prime thesis is that Hopkins was a total charlatan who lied about his Native American heritage and his victory in the Ocean of Fire, among other things. O'Reilly even has a website devoted to exposing Hopkins as a fraud.

The director, writer, and star of Hidalgo all agree that O'Reilly's claims are preposterous, and colored by his ties to the Arabian breed of horse that so famously lost to the mustang over 100 years ago.

'Frank, in one of his stories that he told after coming back [from the race], said that Hidalgo was allowed to breed with the purebred Arab mare, because he had won this race,' Johnston elaborates. 'To someone who holds the purity of Arabian equestrian bloodline almost as a religion, that's like blasphemy.'

Continuing to discuss O'Reilly, Johnston says, 'what this person is saying is that, there's no way an animal of mixed blood could've [won the race]. What if you talked about people that way? It's completely bigoted.'

Screenwriter Fusco supports Johnston's explanation, but is willing to give the proverbial devil his due. 'To [O'Reilly's] credit, I've never seen anyone so brilliant at manipulating historians and the press, and launching such a campaign,' Fusco admits. 'It's been phenomenal.'

Mortensen concurs, saying '[O'Reilly and CuChullaine] have been very successful in getting their one-sided, and very misleading, view out there.'

Another sand trap that Hidalgo has had to avoid is the suspicion that the story of an American cowboy beating Middle Eastern riders on their own turf isn't a prejudiced, blindly patriotic way to cash in on post-9/11 nationalism. 'It's bizarre, because I finished the first draft two years prior to [September 11],' Fusco reveals. 'I thought, "what happens to this movie? What does this movie become now?''

Mortensen is more emphatic in his defense of the movie's inclusive approach towards all stripes of humanity. 'It could've been done as a jingoistic statement, but it's not that at all, when you see the movie,' the actor clarifies. 'People I've spoken with, when I've been traveling around the country, whether they be Muslim or Native American, have been pleasantly surprised. They've gone, out of professional duty, to see it, thinking "okay, I've seen this before; even if it's unintentionally having my culture insulted or trampled upon, this kind of movie is bound to be that.''

Mortensen brightens when going on to say, 'then they come out and have said, "you know, it's an entertaining Hollywood movie, but nonetheless, without making a big deal out of it, it treats my culture with some dignity and respect.' So a Hollywood movie can be good, and entertaining and fun, but doesn't have to be exploitative.'

As Hidalgo hits theaters, its story of two heroes - one two-legged, the other four-legged - is bound to continue surprising viewers and pick up where Seabiscuit left off. But what will be less shocking is if it cements Mortensen's new position as a lord of the box office.

'I said to someone recently that there is no way this [movie] is a [patriotic] metaphor, and then he said to me, "What do you mean? Don't tell me what metaphors I can bring to my movies'' adds Fusco. 'So people are going to see what they're going to see.'