Source: San Francisco Chronicle
David Cronenberg's new film, Eastern Promises, is his second in a row with Viggo Mortensen - is this the next great actor-director pairing? Maybe so, given the overwhelming critical praise for their first collaboration, A History of Violence (2005).

In that picture, Mortensen played an amiable married man with a hidden, ultra-violent past. His new character also has a penchant for mayhem - he's a member of the Russian mafia in London, eager to prove he's a loyal soldier. This brutal figure seems a far cry from the actor's best-known role, the heroic Aragorn in the Lord of the Rings trilogy.

An even more radical departure from Tolkien's fantasy world is the new film's extended fight scene in a bathhouse. Mortensen's character quickly loses the towel around his waist and is left without so much as a fig leaf to hide behind. This mixture of bone-crunching combat and eroticism is pure Cronenberg - the director has said that sex and violence "go together like bacon and eggs."

Though he's made various kinds of films, Cronenberg is best known as the practitioner of a genre called "body horror." The term is shorthand for his fascination, in films like Scanners, Videodrome and The Fly, with frightening mutations, transformations and disfigurements of the human body, often linked to technology.

Eastern Promises is a thriller, but it connects with the body-horror theme in its focus on Russian prison tattoos. The underworld seen in the film is based on a real group, vory v zakone ("thieves-in-law"), a criminal brotherhood born in gulags and jails. Members adhere to a strict code and bear highly wrought tattoos that tell their outlaw status and their criminal history - in prison, these are matters of life and death. It was Mortensen, known for painstakingly researching his roles, who brought the tattooing to the filmmaker's attention.

Cronenberg and Mortensen were in San Francisco recently to talk about Eastern Promises. 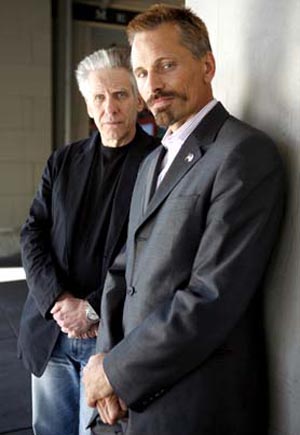 Cronenberg: Well, their relationship is a long, long-term one, and also, they came from the same place. But, weirdly enough, Viggo and I have come from some other planet together. I do feel we're brothers under the skin. But there's no reason for that to be the case.

Mortensen: The connection we made working the first time, it felt right. We did a lot of preparation, and when you get to the set, you find (the two of you have) developed a kind of shorthand. I felt like I was in good hands and that, if I wanted to try something, it was sure not to be taken as an affront. I find (David) to be very secure as a person and an artist.

Viggo's elaborate tattoos in Eastern Promises seem like a key to the movie.

Cronenberg: Ironically, when I agreed to do this script, it (the tattoo theme) was almost nonexistent. (Viggo's) really the dog that brought that back in his mouth. I said to Steve Knight, the writer of the script, "I'm going to send you this stuff (about tattoos). It's going to blow your mind, because really it's sort of the central metaphor of the movie." The script had almost been waiting for that, and we never had it, and it really did crystallize so much. (The tattoos) were a fantastic metaphor and very exciting to discover. They're a key to the complex sociology of the vory v zakone.

Viggo, you studied Russian and learned about the Russian criminal world to prepare for the role, and you've said there's a scary edge in the gangsters' Russian dialogue. (Note: Most of the dialogue is in English but scenes with Russian speech have subtitles.)

Mortensen: What's spoken in the film is a certain kind of Russian, a kind of slang that has humour and double entendres that translate roughly well into English, but not entirely. There are little asides and little jokes, like the scene when we're throwing the body in the river. What (the Russian dialogue) sounds like, and what it's actually saying in Russian, is a little funnier and a little more horrible (than the subtitles indicate). I mean, the average Russian hears this and goes, "Oh!"

The nude fight scene is bound to get people talking.

Mortensen: I was aware, as was David, that people will perhaps focus a little bit on that, and certainly do screen grabs or whatever they do. You can't do anything about it. (The idea was) let's figure out the best way to make the fight believable. And I like the way David shot it. It feels realistic. It's not disguised or smoothed over with camera work or glamorising the body. It's pretty horrible.

Is there a subterranean connection between Viggo's vigorous sex scene with Maria Bello in A History of Violence and the nude fight in Eastern Promises?

Mortensen: Karmically, there's a real strong connection because (in Eastern Promises) obviously I'm getting my retribution from Maria Bello.

Mortensen: The problem is that the people I have those nude scenes with either leave or die. It's not a very romantic illusion.

Viggo, have you been trying to distance yourself from The Lord of the Rings?

Mortensen: No. There are actors who, alone or with the help of other people - image consultants or whatever you want to call them - try to craft an image of themselves. Audiences might buy it for a little while, but eventually they'll think what they're going to think. If I was worried about people only thinking I was Aragorn, there's not much I could do about it, and I frankly don't care. What I think about The Lord of the Rings, other than memories I have of friendships and whatever I learned in doing research for the movie, is that basically it's a good thing it did so well. Without that, I wouldn't be sitting here, I wouldn't have gotten to do A History of Violence or Eastern Promises. No studio would have backed the idea, even if David had known me and thought I was right for both parts.

So what's going to be the next Cronenberg-Mortensen movie?

Cronenberg: We really don't know. I mean, (Viggo) works a lot, and I get very jealous. He works with other directors, but I'll only work with him. So he's the slut in the relationship.
Top of this page
Last edited: 19 September 2007 05:14:05