Source: Entertainment Weekly
The Eastern Promises star talks about teaming up with director David Cronenberg for another round of Violence 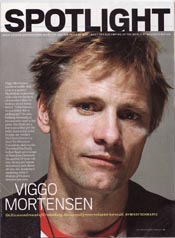 © Entertainment Weekly.
Viggo Mortensen speaks so softly that even at a genteel Manhattan restaurant with only the faintest of noontime dins, he worries about being heard. ''I don't know - do you think this is picking up?'' he asks, looking dubiously at the recorder next to his plate. But there are a few topics that get the mild-mannered actor to pipe up: hockey (he's been known to wear his Montreal Canadiens shirt to the Toronto Film Fest); holler-back screenings of Napoleon Dynamite (he and his 19-year-old son, Henry, are repeat attendees); and, above all else, the Academy's snubbing of his A History of Violence director last year. ''It was maybe the best-reviewed movie of that season, and yet David Cronenberg wasn't on any list of nominees from any [major] organization,'' Mortensen says, his voice now several levels above a whisper. ''He should have been on all of them. Who else could have done what he's done? I mean, come on!''

We'll forgive Mortensen if he comes off as overly protective of Cronenberg, a man notorious for turning oozing bodily fluids into compelling cinema. The Lord of the Rings star is, in fact, close friends with the director; they're a pair of eccentrics who share a dark sense of humour and whose creative ''rhythms,'' as Cronenberg puts it, ''seem to be very much in sync.'' So much so that they followed up Violence with this month's Eastern Promises, a film set in the bleak underworld of a London sex-slave ring run by the Russian Mafia. Mortensen stars as Nikolai, a slick gangster who snuffs out burning cigarettes on his tongue and dumps corpses into the Thames as nonchalantly as if he were munching blinis. He speaks Russian, Ukrainian, and accented English with a chilling snarl, but when he meets a lonely midwife (Naomi Watts), he becomes mysteriously gentle. It's a hell of a performance - one that critics are singling out in a season packed with prestige pictures. ''He's powerful in a way that doesn't depend on swords and beards,'' says Cronenberg, who considers the LOTR trilogy the ''least interesting role'' of Mortensen's 25-year career. ''He's subtle, but wow - he can just turn it on.''

As Mortensen describes it, his experience with Cronenberg on Violence - from prep to press - ''functioned as a dress rehearsal'' for Promises. Certainly the duo's mutual trust helped in filming a Promises scene so raw it makes the animalistic stairway sex in Violence look like an outtake from a Hallmark Hall of Fame flick. (Warning: spoilers ahead!) In a public bathhouse, completely nude save for his full-body prison tattoos, the 48-year-old actor battles two fully clothed, amply armed foes. For more than four brutal minutes, he's slammed, bashed, and jerked into every possible angle, all while remaining 100 percent in the buff. ''I'm flopping around in all kinds of positions, they say 'Cut!' and [suddenly I'm] sitting there going, 'Oh, s---. Excuse me while I get my foot off of my head!''' the actor says, laughing. ''It's awkward, you feel vulnerable.'' Still, he never, not once, considered using a stunt double - not even when it dawned on him that people could freeze-frame him in all his stark naked glory with their DVD players. ''I said to David, 'You shouldn't have to double me, 'cause I can do it,''' Mortensen recalls. ''But it's not necessarily the most attractive thing to look at.''

Famously humble, Mortensen is a master at guiding the conversation away from himself. (Example: ''You talk about the bathhouse scene [as brave], but I give credit to Naomi - other actresses wouldn't have been able to resist prettying up the character.'') And much as he's ticked off about Cronenberg's awards shutout last year, he cares little about his own chances of an Oscar nod for Promises. In fact, when the Academy invited him to join in 2004, he did what few working actors would ever dream of: He declined. ''It's not any disdain. I know they do a lot of good things,'' he explains. ''But I don't want to be part of the mechanism. I like to just do my job and focus on that.''

And ever since his son (with ex-wife Exene Cervenka of punk band X) shipped off to college this past year, that's exactly what Mortensen has been doing. He recently wrapped Good, an adaptation of C.P. Taylor's 1981 play about the rise of Nazism, and is about to head to New Mexico to shoot Appaloosa, a Western directed by his Violence co-star Ed Harris. He's also in talks to star in an adaptation of Cormac McCarthy's The Road. Ever the Renaissance man, he'll soon release, through his publishing house Perceval Press, a CD of grand-piano music that he composed while filming Good and performed himself. It's plenty to keep the empty-nester busy - without forcing him to give up his much-beloved off-screen privacy. ''I think [the tabloids] quickly realized that I was dull subject matter,'' he says. ''The most extreme thing they [printed] was a picture of me around 6 a.m. with a big doughnut in my mouth, walking out of a 7-Eleven. So I've been left alone,'' he continues, his tone gentle but resolute. ''And I like it that way.''
Top of this page
Last edited: 19 September 2007 04:48:31