Mortensen & Cronenberg: A History of Collaboration 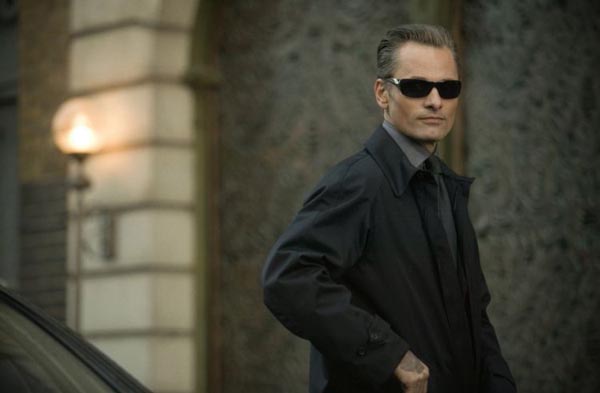 Image Peter Mountain.
© Focus Features.
While Viggo Mortensen is best known as the swashbuckling Aragorn in Peter Jackson's Lord of the Rings trilogy, he received the best notices of his career as Tom Stall, a small-town cafe owner with a criminal past in 2005's drama A History of Violence. A multilingual performer with a flourishing parallel career in Spanish films, Mortensen publishes volumes of poetry and photography, as well as music CDs, between acting assignments.

His latest film, Eastern Promises, reunites him with Violence director David Cronenberg, with Mortensen in the role of a steely Russian mobster. In a phone interview, he talked about researching the character with shady characters in Russia, karma, and the perils of shooting elaborate fight scenes in the nude.

This is your second film in a row with Cronenberg. Are you two developing a Scorsese/DeNiro relationship?

Well, that's very flattering. I know I like to work with him and he seems to be happy enough to work with me, so who knows? Cronenberg is one of the few directors I'd work for in anything. After A History of Violence, this was the one that appealed to him, fortunately, so we dove into it together. We have a pretty good shorthand by now, a good understanding of each other's work methods. And we have a lot of fun, even with dark material like this.

This was shot in London, but it's a seedy side of the city moviegoers rarely see. What was it like to work in those locations?

I liked that. There's a long history of English film noir gangster movies, but nothing like this. I liked it that it wasn't a travelogue. We shot in some pretty tricky neighborhoods to achieve that, and also at night. It charged the atmosphere a little bit, which was right.

Did your multilingual background help you with your extensive Russian dialogue?

I'm sure it did. I did as much work as I could on language because I think it's important. More Russian is spoken in the movie than was intended because of that. I translated everything and then tried to make sure the slang was correct. I went to Russia for a couple weeks and worked on that, worked with Russians who I guess you could say were familiar with this underworld culture. The other thing that was good was that I was able to be a fly on the wall more than I have been able to be in recent years. In fact, a lot of people thought I was Russian and came up to speak to me. When they realized I couldn't speak the language very well, they left me alone. Until the last day, not one person recognized me as an actor. Then a kid came up and said. "You're Aragorn."

This time out, you play a very guarded, undemonstrative character. What's the appeal in playing a role without big emotional scenes and speeches?

Well, some actors like to show off more than others, I suppose. All actors have a bit of an exhibitionist streak, but I am of the philosophy that less is more. I was just trying to be true to the people I met who were similar to the character, and that's what was called for.

Between films, you have projects in photography, poetry and music. Does that make you eager to chip in with suggestions about the cinematography, script and score?

I don't meddle. I just offer things that might be helpful. Because David understands that I am trying only to help, he has no problem. I feel like if the suggestions are useful, he'll use what he needs. As far as cinematography, yes, I suppose it does help that I understand photography and lighting - knowing that if he uses a particular lens, this is what he's going to see.

Your fight scene is breathtaking. How do you tussle in a hard tile public bath, buck naked, without getting completely banged up?

Well, you don't. All those blocks, all those throws, and obviously you can't wear pads. I said to him, "I'm going to be hurting doing this." On top of that, the morning we were going to do it, I woke up and my back went out. The whole fight, I was not feeling very good, but it sort of all worked. So for two days I got bruised all over and the makeup people just covered it up and covered the bumps as we went along. It was payback, in a way, for the stairs scene in A History of Violence [where Mortensen and co-star Maria Bello make ferocious love on a staircase]. We both took a pounding, but Maria took a worse pounding on those wooden stairs, so I think it was karma. I got paid back and then some.

Can you tell me about Alatriste? Are you pursuing a Spanish-language career?

I've worked three times in Spanish, and that movie was a huge success. In Spain, it was nominated for 15 of their Academy Awards and won a few. It was a kind of a landmark for Spanish cinema. Captain Alatriste is the hero of a series of books that are like [J.R.R.] Tolkien in Spain. They're adventures set in the 1600s. He's a guy who got into the army as a teenager and luckily survived almost 30 years, though not without a lot of scars. Through his eyes you see the highest levels of society, from the king's court and his advisers, to ordinary grunt soldiers like himself and the shady side of life. I hope people get to see it in theaters here, because it's so beautiful to look at. The lighting is based on Velasquez, and it begs to be seen on the big screen.

It seems that with your background, directing would be a logical next step. Any plans along those lines?

I think about it, and obviously, yes, I do like photography, I love actors and like working with them. But when I see how David does it or Peter Jackson does it, I see that it takes a lot of work to set it up properly. And you have to have a lot of luck when you launch it. It's a long road. I read somewhere that some actor was saying acting is the hardest thing in the movie business. I disagree. It's directing.
Top of this page
Last edited: 14 September 2007 15:19:14