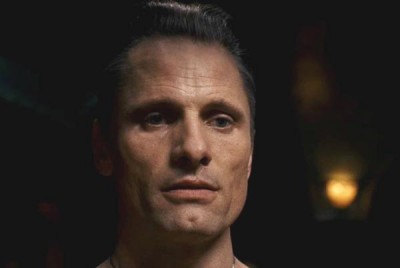 © Focus Features.
Viggo Mortensen may be a physical, intimidating presence on screen but in person he is more wiry than you expect, and much, much quieter. A serious, philosophical actor, the Manhattan-born Mortensen (he grew up in New York and South America and his father is Danish, so he's multi-lingual) is an exhibited photographer, poet, painter and publisher. If that isn't enough "P" talents for one man, he's also a pianist whose new album is Time Waits for Everyone.

In Eastern Promises, in theaters today, Mortensen, whom the Daily News spoke with at the Toronto International Film Festival, again teams with director David Cronenberg (A History of Violence) for another smart thriller, this one set in the heart of London's Russian mob.

"I don't know what it would be like to just do movies because I do other things," said the introspective Mortensen when asked if his tough-guy roles balance his poetry and literary criticism. "Obviously as an actor and a photographer I understand and appreciate good lighting, and I think that [cinematographer] Peter Suschitzky, as he did in History of Violence and so many other movies for David, largely unrecognized, because it's so subtle and so good, is a great photographer.

"So, understanding that and how I can be helpful to the director and the cinematographer as far as playing the scene and understanding about lenses on a technical level probably helps, but once you're doing the scene you're not thinking about all that.

"I mean, I probably have an appreciation for what the photographers do and what the director is trying to accomplish in terms of the storytelling - and I see it as my job to pay attention to everything that's going on on a movie set ."

It's this attention to detail - he learned some Russian so he could sprinkle it through his character's speech - that informs everything Mortensen does.

"One of the reasons that I appreciate and respect David Cronenberg as an artist, and as a person, is that he's paying attention all the time. I don't think it's an accident that actors always give interesting performances in his movies, because he pays attention to what they're doing and he finds a way to allow them to feel comfortable, especially when performing emotionally or physically awkward material."

"He finds a way to make it very human," Mortensen added, "and it's smart because he gets a lot more out of people than other directors do."

He also asks for a lot more as evidenced by the violent sex scene in A History of Violence and Mortensen's naked steam room fight scene in Eastern Promises.

"But he always asks politely," Mortensen said, laughing, "which I think is also important.

"And you believe that he's sincere."

"In real life every person is complicated and it's impossible to really know them completely," Mortensen said. "And people never really know every single thing about themselves. That's what makes David so good. He poses a lot of questions and if you see the movie again there are even more questions.

"But he doesn't really give you answers. His work is artistically accomplished and it's unusually respectful of the audience. It's also quite brave, and that's one of the reasons that he hasn't gotten his due, critically, as much as he might have."

Cronenberg's films, in some ways, are like the multiple tattoos that adorn Mortensen's body in Eastern Promises. In the film, they're a by-product of his character's stint in a Russian prison but they're also a story told through symbols which have different meanings depending upon where the symbols are.

Mortensen said the impressive array of tattoos were not inked on with makeup but were "transfers that were put on, and they'd stay on quite awhile," he said. "You touch them up a little bit."

But the tattoos began to make Mortensen feel uneasy.

"There's been a lot of Russian new money coming to London over the past few years," he said. "Some of it may be a little shady, but most of it is people who just made a lot of money, and they've bought a lot of expensive real estate in London.

"But since the [Alexander] Litvinenko poisoning, which happened just as we were shooting, people became hyper-aware of [this new Russian presence]. And the tattoos that I had are so specifically Russian, having to do with specific Russian prisons and certain criminal activities that there's a couple of instances where I was in a pub or in a restaurant and people who were Russian got uncomfortable, and I thought, that's not a good thing so I washed them off.