Viggo Mortensen Fights Nude In Eastern Promises - But Could He Take Borat? 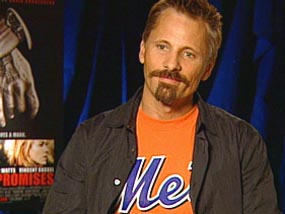 © MTV Networks.
Onscreen he's most often a man of action, whether he's wielding a sword in the Lord of the Rings trilogy or defending his family in A History of Violence. But in real life, Viggo Mortensen - the sometime poet/painter/publisher and, yes, actor - is as gentle and soft-spoken as they come.

Mortensen's latest movie is the David Cronenberg-directed Eastern Promises and his turn as a Russian mob man in the thriller has many talking Oscar. In a recent conversation, the 48-year-old actor revealed whether he'd be up for The Hobbit, which Adam Sandler film he's obsessed with and why he insisted on filming a brutal fight scene in the buff.

MTV: It's the second time in a row for you and David Cronenberg. Why does this partnership work so well?

Viggo Mortensen: [We] had a great time on A History of Violence. One of things I like about him is he's got a great sense of humor, so we would be doing the grimmest scenes in that movie and still laugh a lot. He has a little bit of a twisted sense of humor, which I happen to like.

MTV: There is some dark humor in this film.

Mortensen: You never know how it's going to translate until you see it with an audience. We saw it two days ago with a big audience for the first time, and I was really glad to see the little things between the characters that we found amusing really worked. They really got it. There are some sequences that are pretty hard-hitting, so it's nice to have some comic relief.

MTV: You did a lot of research to play this Russian man on the rise with the mob. It seems like you are always extremely committed to nailing down the small things for a role, whether it's tattoos or an accent.

Mortensen: David's that way too. One of the reasons I enjoy working with him is that he's very meticulous in how he prepares. He's like a scientist, maybe a mad scientist. He's very thorough and he's very open about what he finds. And he knows that I'm going to do the same thing. I'm going to go to extremes to research things. But what's great is that when he arrives on set he has it all in the back of his mind and says, "Let's play, let's see what happens." It is, after all, still play. There is a childish or childlike quality to doing good work, whether it's movies or theater.

MTV: The scene everyone will be talking about is the extremely graphic and long nude fight scene you have with two thugs in a bathhouse.

Mortensen: When you trust someone as much as I do David, you will do what it takes. There are sequences here where I'm pretty vulnerable and awkward. There's no other way to do it if you're going to do it realistically.

MTV: So you couldn't have done the scene with a towel?

Mortensen: Cronenberg said, "Well, here's the scene: You go into this steam bath with this old guy, and then he leaves and two guys come in and beat the crap out of you." [He laughs.] I think it would be silly if we were trying to avoid seeing certain things or to unrealistically have your towel on during the entire fight. People wouldn't believe it.

MTV: I have to admit, it made me think of another recent naked fight scene. Did you see Borat?

Mortensen: [He laughs.] Have we risen to their level? Excellent.

MTV: It's a good companion piece.

MTV: Do you think you could take Borat in a naked fight?

Mortensen: I don't know. I'd be scared. I'd be a lot more scared of him than I would those two Chechnyan guys with the knives. Definitely.

MTV: What has been the best byproduct of being a part of Lord of the Rings?

Mortensen: The best thing, apart from the memories and the friendships, is getting roles like this. Even if David had wanted me in A History of Violence or this, no studio would have said OK unless I were a relatively well-known actor. Because Lord of the Rings did so well, we all got a chance to do other things. That's the main thing, the opportunities. Then you need to know what to do with it. I've been fortunate to do some good stories.

MTV: There's talk of a film version of The Hobbit. Are you curious?

Mortensen: I'm curious about it. Anybody that likes [author J.R.R.] Tolkien or Peter Jackson's trilogy is interested in what happens. I'm not really in the loop. I don't know what's going on. It seems pretty obvious that Peter Jackson would be the person to direct it.

MTV: Aragorn isn't a part of that story. Is there any scenario you could imagine where you'd be a part of the film?

Mortensen: I have no idea. The Lord of the Rings trilogy borrowed from other sources. There were dialogue and set pieces that came from work outside of Lord of the Rings or took from the appendices, so you never know.

MTV: I heard you're a big Happy Gilmore fan.

Mortensen: Yeah. I think it's a really good movie. [He laughs.]

MTV: I think that might surprise some people. I don't know what that says.

Mortensen: It says I'm a dork. [He laughs.] I thought it was a very funny movie. What can I say?

MTV: Are you up for a cameo in a future Sandler flick?

Mortensen: Nothing is impossible, I guess. I don't think Adam Sandler or Will Ferrell fear competition from me in their arena.

MTV: Maybe you need to make your intentions known so they can fear you.