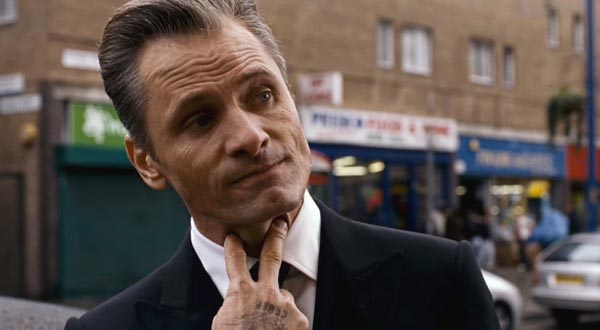 © Focus Features.
Viggo Mortensen turns 50 next year, and he's one of those movie actors whom you want to see age. There's a menace that lurks beneath the surface of Mortensen's cool, taut exterior and it never comes as any surprise when it spills over and scalds anyone unfortunate enough to jar that smoothly lined lid open.

This is the quality of an old-school action star, the ability to hint at lifetimes of unspoken and unseen experience that kept drawing directors like John Ford back to actors like John Wayne, Anthony Mann back to James Stewart, Sergio Leone back to Clint Eastwood, and - twice now - David Cronenberg back to Mortensen. And it's a quality that only gets more menacingly potent with time.

Although Cronenberg has demonstrated a persistent knack for drawing untapped resources from a series of unconventional actors - James Woods in Videodome, Christopher Walken in The Dead Zone, Jeff Goldblum in The Fly, Jeremy Irons in Dead Ringers and Peter Weller in Naked Lunch - he has, with the exception of Irons, seemed to have tapped these performers' deeper wells of inspiration after a single drop in the bucket.

Not so with Mortensen, whose turn as the all-American, killer-next-door in Cronenberg's A History of Violence can now be seen as prologue for the actor's appearance as an impenetrably motivated Russian mob chauffeur in the menacingly brilliant crime drama Eastern Promises.

In the same way that A History of Violence stretched the skin of genre over a meditation on the mutually implicating relationship between producers and consumers of mass-market brutality, Eastern Promises is a movie of dangerously deceptive surfaces.

On one level the story of the lurid revelations exposed when the London-based Russian crime family headed by the outwardly genteel restaurateur Semyon (Armin Mueller-Stahl) finds itself investigated by a hospital midwife (Naomi Watts) looking for clues into a pregnant teenager's death.

On others, Eastern Promises is another Cronenbergian investigation of the hard-wired nature of human monstrosity.

In the gangster movie, violence is merely the price of doing business. In Eastern Promises, a gangster movie that wears its conventions with the confidently disarming ease that Mortensen's Nikolai wears his retro-cool '60s suits and Link Wray pomp, violence is the very business of business.

As this is the first Cronenberg movie in years to appear without the dubious benefit of months of post-Cannes critical pre-digestion. And since surprise is one of its most effectively deployed tactics, it seems almost cruel to reveal too much about either the movie's plot or the startling diversions encountered along the way.

Suffice it to say that there is much more to be said: about the film's unsettlingly use of London specifically and space in general, about Cronenberg's increasingly minimal technique, about the film's combustible and displaced currents of sex, violence and power and about a filmmaker whose willingness to take risks is only made more remarkable by the fact that he messes with nothing more deliberately than his own audience.

In the meantime, keep your eyes on Mortensen. You could make an entire movie about the way that guy just stands in a room and quietly scans the atmosphere for even the slightest molecular disturbance.