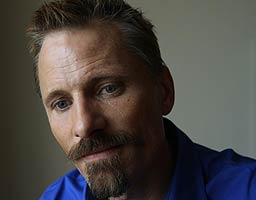 The American actor, famed for his role as Aragorn in The Lord of the Rings trilogy, also has the inside track on Cronenberg's world. He has now worked twice with the Toronto-based director.

"I do like him," Mortensen told Sun Media yesterday at the 32nd Toronto International Film Festival. "I do admire him a great deal. And I'm proud that I told these two stories with David. And I'm very glad to see him getting his due, if only to a certain extent."

Their first collaboration came on A History of Violence two years ago. Mortensen, 48, thought Cronenberg should have been recognized with an Oscar nomination as best director. Despite acclaim, "it was like he vanished, as usual," when it came time for the nominations, Mortensen said. "Maybe this time ..."

This time refers to the Anglo-Russian mob thriller Eastern Promises, a Canadian-British co-production shot on location in London, England. It makes its world premiere tonight as a filmfest Gala, then opens in theatres across North America next Friday.

With a heavy, cultivated accent based on research and learning to speak rudimentary Russian, Mortensen plays a menacing, Russian-born thug. He worms his way into London's crime world. There he comes across an emotionally fractured character played by Naomi Watts, a woman who might further complicate his plans.

The story, and the characters, are multi-layered.

"It's the same as A History of Violence," Mortensen said. "I don't think it's unfair to say that these characters, as in many of David's movies, are not as they seem at first. They are much more."

They also provoke an interesting visceral reaction in viewers at the end, he said. Even he was caught up when privately watching the finished film recently.

"I was asking myself, just like with A History of Violence, what is going to happen with these people? You're involved. In most movies, you don't walk out caring that much."

Mortensen does want to caution those who think that A History of Violence and Eastern Promises represent a new chapter in Cronenberg's career.

"People say that he has broken away from what he used to do. But I don't think it's such as break for him. A lot of themes in A History of Violence and Eastern Promises are the same as in his past films. But people want to have a way to pigeon-hole everybody, including someone as complicated as he is.

"The themes he deals with are the themes we all deal with in everyday life. We're all going to die. What are we doing here? Can we trust anyone? Do we really know ourselves? How can we possibly think we know other people? What are other people's motives? All of those kinds of things. But that's just life."

What Mortensen likes most about working in a Cronenberg film is how these sophisticated questions can be woven into the text of what looks like a generic thriller.

"I see him as a scientist," he said of Cronenberg. "He is very meticulous. He has a scientific, analytical approach, but there is some chance to it as well.

"He's confident without being arrogant, because he knows what he's doing, which is comforting for an actor. It is comforting to be working with someone you know will make a good movie, if it's at all possible, with the material."

Watts has beauty and brains

Not only is she the real deal as an actress, beauty never gets in Naomi Watts' way, according to Viggo Mortensen.

With an uneasy but interesting romantic spark, the two of them co-star in David Cronenberg's Eastern Promises.

Mortensen, a modest, reflective man who loves to talk about other talents instead of his own, told Sun Media yesterday that the Oscar-nominated Watts is special. Especially in a difficult era for celebrities who want to be taken seriously.

"Everybody talks about how people look, the dress they wear and 'I hated her hair!' and all this kind of stupid stuff. It's very distracting, I think, for a performer - especially actresses.

"In some cases, that preoccupation with image carries over into movies and ruins even good performances," he said. But never with Watts, who turns 39 on Sept. 28 and is known for films such as King Kong, The Ring, Mulholland Dr. and 21 Grams, her Oscar-nominated effort.

"She can't really NOT look attractive," Mortensen says with a grin about the blond beauty, who plays a troubled London mid-wife.

"What I respect is that not only does she act really well in the movie but she looks like she has that job.

"And she looks like she lives in that house and that was her mom, that was her uncle, and that she had a miscarriage and trouble in the past and s--t that didn't work out and a strained relationship with her father, all because of what she exudes and the way she looks."
Top of this page
Last edited: 10 September 2007 06:44:55