By Silvia Feist - translated by Always Smiling and Doreen 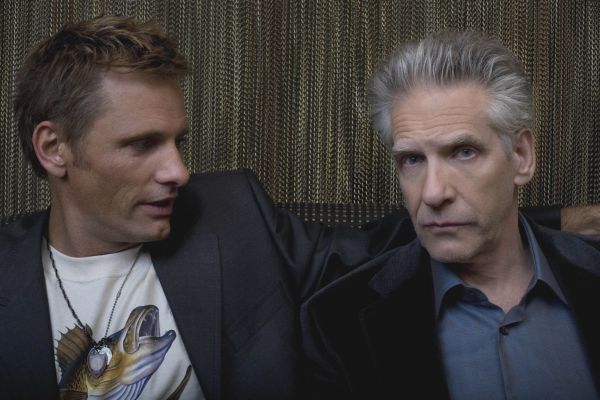 Image Yariv Milchan.
© Vogue Deutsch.
Twenty minutes late director David Cronenberg rushes into the Four Seasons in his hometown Toronto. He wears a grey suit that matches his grey hair which is combed back and says: "Hello, I'm David." But he recoils from the hand held out to him by explaining that he has a cold and doesn't want to shake hands. His interlocutor, the Danish-American actor Viggo Mortensen, grinningly informs the Vogue moderator: "Shaking hands? As if it would be an option for him. Either he doesn't greet you or he gives you a French kiss." "Nonsense, it's a Canadian kiss," answers Cronenberg. "That's how we are used to greeting each other here. It's like rubbing your noses to say hello." They are not even a minute together but they are already fooling around. They first met at the shooting of A History of Violence but they seem to be friends who've known each other and their peculiarities - Cronenberg's laconic sarcasm and Mortensen's almost introverted quiet - for a long time. Mortensen takes off his jacket. His interlocutor stares indignantly at his red sweater which is revealed.

David Cronenberg: You can't wear a club shirt of the Montreal Canadians in this town!

David Cronenberg: There will be trouble, baby. A Montreal confession is the summit of provocation in Toronto.

Viggo Mortensen: The summit of bad taste some people would say. But you can have bad bad taste or good bad taste.

David Cronenberg: Okay, yours is bad.

Viggo Mortensen: I'm just happy that the season is starting. That's why I'm wearing this shirt. (For the shooting he complies with his friend who wants to see him "in a suit. It's Vogue.")

David Cronenberg: Did you know that it's no question and answer interview but a talk between you and me?

Viggo Mortensen: Oh, I have to talk to YOU?

David Cronenberg (who looks to the Vogue moderator): Look! For a long time I've thought Viggo and I would be on the same wavelength until I read his statement that I had shocked him and that I had been grotesque.

Viggo Mortensen: Not you, your house! It's a grotesque museum full of strange things. I will never forget that you gave me a signed incisor of Guy Lafleur. (An ice hockey crack from his favourite team.)

David Cronenberg: I have some more of them. I could easily do without it to win you for my movie.

Viggo Mortensen: You took me with my Danish roots and the passion for my team.

David Cronenberg: Since my study visit in Copenhagen I have a deep appreciation for the Danish mentality. So it was very easy to confuse you.

Viggo Mortensen: Who was confused? You have permanently stared at my ears because you thought they had to be pointed...

David Cronenberg: How should I know how you look in real life? Maybe Aragorn from Lord of the Rings had fans but nobody suspects that it was you. You were an unknown until I picked you up from the gutter.

Viggo Mortensen: When I was totally enthusiastic you couldn't bring yourself to refuse the offer.

David Cronenberg: We Canadians are just too polite. We are also very kind-hearted. That's why lots of American deserters seek refuge with us. It happened during the Vietnam war and also the Iraq war is obviously a disaster.

Viggo Mortensen: In my opinion the complete US administration should be removed from office. I exactly remember hearing a speech of Bush shortly after September 11th in which he said: "One part of history has been written by others, the remainder will be written by us." This could have been ...

David Cronenberg: ... formulated in every dictatorship.

Viggo Mortensen: Yeah. It's unbelievable that there had been an expensive impeachment for Clinton just because he lied about a blow job. And here nothing happens. The problem is that Bush trusts in his own fairytales. And he enjoys the attention and the backslappings.

Viggo Mortensen: He's a frat boy for whom everything is going well.

David Cronenberg: Now I remember why I couldn't forget you after the shooting!

David Cronenberg: I believe it's helpful that we both do not take everything too seriously. Did I tell you that I've recently had a real rock star moment?

David Cronenberg: In Venice two girls waited in front of the hotel holding a sheet of paper in their hands with the superscript: 'Spider by David Cronenberg is the best movie ever'. When I came closer they started yelling: 'Madonna, Madonna!'

Viggo Mortensen (grins): They mistook you?

David Cronenberg: Of course not. They were young Italian girls who cried for the Virgin Mary when they looked at me - just like an old Beatles movie where girls faint. After giving them autographs they told me that they were working on a movie and Spider had been their inspiration.

Viggo Mortensen: Wow! Inspiration is important as well as other people's reaction to your own work. Exene, for example, encouraged me to recite my poems in public. At the beginning the idea was totally worrying for me. But something happens when you are faced with an audience. No matter whether you present photographs, pictures, movies or poems to other people, it's worth it because you always learn something.

David Cronenberg: Have the readings been as you feared?

Viggo Mortensen: Oh yeah. But after such events I always know that there are three or four unnecessary words in this or that poem. Not that any listener would shout: 'Hey, take this one out!" But during the recitation I clearly realized when we made slow progress at a certain point. I primarily admire your work because your movies are totally different although you realize them with the same team. You permanently discover something new and you're not satisfied to make just a "new Cronenberg".

David Cronenberg: That would be rather boring.

Viggo Mortensen: Almost all were good enough for a controversy. Which movie has been more controversial: Dead Ringers or Crash?

David Cronenberg: Certainly Crash. (The film from 1996 deals with people who get excited by car accidents.)

Viggo Mortensen: What was the criticism about? Sex? Pornography? Danger to the traffic?

David Cronenberg: Ted Turner who blocked the movie from the start in the USA warned against exciting teenagers into smashing up cars and having sex in them.

Viggo Mortensen: I fear they will do it anyway.

David Cronenberg: Young people have had sex in their cars since the first one was produced. A whole American generation was fathered in the back seats in the Fords of the Fifties. Turner evaded the question what has really troubled him.

David Cronenberg: That the story was his own. Turner once did a boat race against his former wife who was pregnant at that time. When he realized that he would lose he crashed her boat to stop her. She was very angry. In my opinion his aversion to Crash is because the movie reminds him of himself.

Viggo Mortensen: Are you surprised how people interpret your films?

David Cronenberg: Every time. And I like that. At a certain point it's the same with kids. As a father you experience this moment when you see your son or daughter far away with strangers and you suddenly realize 'My God, my child is an independent person', a human being who has their own relationships. In a similar way my movies have relationships with people, and I have nothing to do with it.

Viggo Mortensen: I sometimes feel that my roles get their own dynamism and have a completely unique relationship to the audience. Then in interviews, for example, I notice that a relationship between the role I play and me is assumed. It's alarming when somebody seems to know you only because he has seen you on the screen. Then somebody wants to inform me with a missionary zeal about my behaviour which I don't realize myself although it's 'very obvious'.

David Cronenberg: I'm convinced that your Aragorn independently exists from you. There are people who claim to be Viggo fans but in fact they are Aragorn fans. They fall in love with the character and identify themselves with him because the fantasy behind it is important for them. Maybe the people who seem to be your fans can't stand you in our film.

Viggo Mortensen: You're right. Especially because I kill dozens of dwarfs - something Aragorn would never do.

David Cronenberg: As far as I know your son advised you to take this role because he knows the books by Tolkien, and he was present during the shooting. And I still haven't met him. Or do you fear I could have a bad influence on him?

Viggo Mortensen: That's it. When I think about it then it's really the first movie where Henry didn't visit me on set, not even for a short time. In some of my other movies Henry appears somewhere in the background.

David Cronenberg: I'm very much for nepotism. It's really good when your whole family is involved in a project. My wife, my sister, the kids ... But it can be hard. Martin Scorsese once told me how he had lain in bed with his former wife who has produced some of his movies. Suddenly he had turned to her and said: 'Why can't I get the crane tomorrow? It's necessary.' And she said: 'Sorry Marty, we can't afford it. And besides you don't really need the crane.' All of a sudden the job is in the bedroom.

Viggo Mortensen: For me it's important that Henry knows I have a real job even if it may be relatively unusual.

David Cronenberg: Oh yeah, when you want to demystify this business you just have to take your kids to the set. After ten minutes they want to leave. Everything is slow and boring.

Viggo Mortensen: But he has realized that I earn our living and not only go to premiere parties. It means I have to get up early, sometimes it doesn't work well, and at the end of a day you don't know whether you have managed everything.

David Cronenberg: Yeah, not that he thinks Daddy and the other people do something mysterious but a real job.

Viggo Mortensen: When he was a small boy I took him with me to the music studio. I can't believe that he finishes school this year.

David Cronenberg: Don't worry! You don't get rid of him that fast. Kids stick to you like chewing gum under your shoe: You think they've got away but then they permanently come back.

Viggo Mortensen: YOU permanently called them from Cannes!

David Cronenberg: Just to tell them that Carolyn and I wouldn't return. By the way, I'm still planning to marry you off.

Viggo Mortensen: When I see you both after 30 years then you have had good luck with your relationship.

David Cronenberg: We are still working on it. Goodness is helpful, fondness, empathy - and humour. And I think some luck. Because it's my second marriage.

Viggo Mortensen: You have portrayed the couple in our film very fondly.

David Cronenberg: Of course I didn't expect that Carolyn and I would have to show you all the sex scenes because Maria Bello and you didn't comprehend the stage directions. But as we regularly have sex on the staircase we fortunately made a good team and were able to show you how it worked.
Top of this page
Last edited: 23 August 2007 15:17:48
© Vogue Deutsch.