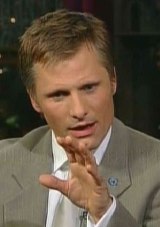 Good to have you here and we just saw Bill Murray nominated for Academy Awards, and the movies that you have appeared in did pretty well at the Academy Awards, didn't they?

They did all right.

Did you attend the Academy Awards?

Aah, no I didn't. My family was in town, my parents and 'bout half my family was at my house.

If your family had not been in town, would you have gone to the Academy Awards?

Well [laughs] probably not, no. I mean, unlike my family I don't have the annual custom of watching them and everything, even. But they wanted to. They got there and they said 'Where's the TV?' And I said 'I don't have a TV.' So I had to call a friend of mine and ask if we could come over, if I could come over with my whole family and watch the Oscars. He said 'All right. Right now?' And I said 'Well, it's this year, isn't it? Right now?' In about 5 minutes we raced over there and I said 'You guys watch and enjoy and I'll go get some food, whatever. I'll go take a nap.' Unfortunately my friend has a TV pretty much in every room, the kitchen, the living room, the guest room. So I went in the guest room and turned off the light, turned off the TV, and I'm lying there. But I can hear them. I mean it's like surround sound Oscar time. And I heard Lord of the Rings win their first one and I thought, 'Well, I can lie here in the dark like an idiot, or I can go out and be a man and sit in the kitchen and watch it with everybody else.' [laughs]

I was glad I watched them. I mean, we did all right.

Yeah, you did all right. You won 11 Academy Awards.

These movies have been a part of your life for a certain number of years, two years, three years, whatever.

Even if they had not been nominated I would have thought you would maybe be interested in what was going on. They were nominated for 11..and why don't you have a TV?

Aah..I have a phone. And a fridge. And a door. And uh, I don't know. It wasn't something that occurred to me that I had to get a TV. For my parents trip.

You realize you're in show business? You're aware of that, right?

Tell us about your background. You're originally from where?

Well, I was born in Manhattan, but my..

Yeah. Born at New York Hospital. But my Dad was kinda restless and he got work in a lot of different places. I was raised..I was about 11..I lived in South America. Argentina mostly. Which was good. Among other things, we lived on a farm part of the time so I got to ride horses a lot, which obviously served me in the last two movies.

It's a beautiful country, isn't it, Argentina?

It is, it's really nice. It's a lot like New Zealand, actually. Really beautiful. And it was a nice existence for us as kids, because we were given a lot of freedom and being the oldest I could take off on a horse...

Ah, no..I mean..yeah, when you're a kid you're not that afraid of stuff. I mean, I'd go off riding.. you know, you fall off the horse, you get back on, or if you don't catch the horse, you walk home. Just like Manhattan.[laughs] Every once in a while you do something really dumb when you're a kid and you realize when you're an adult that that's dangerous, but.. you know.. There was one time when I was coming home at the end of the day, going through the paddocks, and you open the gates from horseback, and the last gate I was about to grab the latch and there was this beautiful, beautiful snake wrapped around it..it was orange and black and white stripes. And I thought 'I'm going to take this home and show it to my family'. And I tried to grab it and he tried to get me. And I like whacked it just to stun it and I grabbed it by the neck and opened the gate and got through, closed it and said "Dad, dad, look what I got." And he freaked out, cos it was a Coral snake, which if you get bit I think two minutes, three minutes, you're dead.

Oh my God. So you're riding around with a dozing coral snake?

Well, he was waking up, and looking at me.

Oh goodness. So, what does your father do now that you have the snake there?

Ah, well..he and I both proceeded to whack it some more. Sorry.

How old is he?

No, it's great. He's a really good person. He really is my best pal. I mean, he has a healthy disrespect for me and all adults, which is only natural, and he's learning to drive now, and I've been trying to teach him to drive, but as soon as he learned a little bit about it and got out the manual he started being very critical of me. And now I feel really nervous around him. I mean, in the car, he's like "Turn signal!", you know. And I'll park and he'll look out and he'll measure it, "You're a foot and a half away from the curb." It's really nerve racking: I'm bumping into cars. It's horrible. But then when he drives - he's got his permit - I'm even worse off. I'm a terrible passenger. So I'm sitting there all the time thinking he's going to hit the parked car and all that. I'm just..I dunno..I never knew that cars were so dangerous. But he'll be alright. He's good. He's much more careful than I am and he's really a good kid.

Now, you said that you were born here in Manhatten. When did you come back to Manhatten after being in South America? When did you start working on your acting and stuff?

Aaah, well..my parents split up when I was about 11, and we came up here, but we lived in Northern New York, up by the Thousand Islands area, up by Canada. And then after school I traveled around. I lived in Denmark for a while, where my Dad's from. And I came to New York, it was one of those things I just tried, you know, like a lot of things, and I happened to get encouragement. I studied with a guy called Warren Robertson, a great teacher, and he encouraged me. I stuck with it, you know.

There was usually no income. For a long time, like most actors. I mean, if I'd known how tough it was gonna be to make a living in a steady way, I'd probably have quit.

Yeah, but one day you wanted to have a phone.

I thought that. I actually thought that as well. And my agent said...cause I used to run to the payphone every few days and call. He said, "Well, you had a couple of auditions yesterday, but too bad." And I got one once, and I had it in the house, and I was just looking at it - it was just plugged in - and it made me nervous, like with riving with Henry. It's the same kinda horrible...like this object is really scary, you know. And then it rang.

It was my agent. I said, "What do you want?" He said, "I'm just making sure your phone works, that you've got the hang of how it works." And actually, next time it rang I threw it out the back window into the alley. I got a phone when I moved to California.

This movie, Hidalgo, it couldn't be more exotic and more romantic and it just sorta has a lovely spirit to it, seemingly so. It's about you. I guess it's based on a true story, isn't it?

Yeah, I play a cowboy from the 1890's, his name's Frank T Hopkins, and he was very well known for winning a lot of endurance races.

Right. And then became famous working with Buffalo Bill Cody, is that correct?

He was on that show, and he was billed as...he and his horse, Hidalgo - the name of the movie, that's the horse, the mustang he rides. And they were invited, or challenged, to go to Arabia, cause they didn't like the fact that we were billed by Buffalo Bill as the greatest endurance racing team in the world. So these gentlemen from Arabia challenge us to go over there.

And it's a desert race?

Yeah, there's a...I think it's from the start of the race. And it's a scene I like for among other things...I mean, a lot of people have said that about this movie when they've seen it, "Well, it's really nice, from Hollywood, to see Arabs and Native Americans and such treated with some respect." But I think it treats cowboys with respect, you know..that attitude...they've gotten a bad rap in a lot of places, cowboys, or that cowboy ethic, recently. And the cowboys I've met are all...you know, what they lack in knowledge, what they're ignorant about, or haven't seen of the world, they're at least curious about it. And I think this scene kinda shows that, or else it shows a little riding...

[clip from Hidalgo is shown]

Actually, you liked the horse so well, you now own the horse, right? The movie horse?

Yeah, his name is TJ and we got to be really good friends. He was the best actor in the movie, actually - he really had a personality, a real presence.

The film opens tomorrow and it looks tremendous, so I hope it's a big, big hit for you.

I would love to.