Viggo Saddles Up For Equine Epic

Source: The Scene at The Eagle 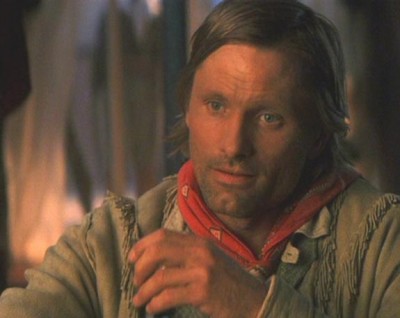 © Touchstone/Buena Vista Pictures.
Upon seeing trailers for Hidalgo, one might think the film is a strange cross between Seabiscuit and The Mummy. However, the film is actually a very interesting biopic dealing with the relatively unknown Frank Hopkins.

Hopkins was an accomplished long distance rider who traveled and performed with Buffalo Bill Cody's Wild West show. Hopkins' horse, Hidalgo, has the title of "greatest long distance race horse in the world" in the Wild West show and when an Arab sheik, who breeds pure Arabian race horses, learns of this title, he challenges Hopkins and Hidalgo to compete against his and many other horses in a 3,000 mile race through the desert known as "the Ocean of Fire." Hidalgo, a wild mustang (basically a horse mutt), is considered a joke by the competition when compared to their purebred race stallions. However, Hopkins' resourceful attitude and kind treatment of his horse make him an unexpected yet worthy opponent.

Viggo Mortensen of Lord of The Rings fame plays the soft-spoken cowboy, and sees the story of Frank Hopkins and Hidalgo as a classic hero's journey.

"You don't know how you are going to get through it but in fact the lessons learned come from the process of going through it," Mortensen said. "In other words, your character is highlighted, or forged to some degree, or defined by going through the ordeal not so much whether you get through it completely, finish the race or win the race."

Indeed, Hidalgo pits Hopkins against sandstorms, desert robbers, quicksand, death traps, the plots of his fellow riders, his own alcoholism and understanding the local Muslim culture.

Hidalgo is an adventure film in the same spirit of the Indiana Jones films. There is enough action to make it fun and enough subtext about culture and finding yourself to save the film from being fluff. It is well paced and avoids becoming boring during slower parts because of its interesting characters. The film isn't necessarily groundbreaking, but it seems that Disney is starting to make solid, fun and enjoyable films like Pirates Of The Caribbean and Freaky Friday after a fairly long drought of lesser films like Bruce Willis' The Kid. The film also succeeds due to Mortensen's performance.

Mortensen's seemingly carefree smugness seems very fitting for Hopkins' character. Hopkins' interactions with his assigned Arab assistant are often very funny because of Hopkins' wise-beyond-his-years style and delivery and the assistant's constant pessimism. Omar Sharif is also very good as the sheik who challenges Hopkins. The sheik is faithful to the traditions of his culture but at the same time is fascinated by western culture, especially the Wild West.

The film is quite considerate of Muslim culture and although Hopkins doesn't always follow the rules of the culture, he does always respect it.

"[Hidalgo is a] big budget American film that involves an American lead character, a protagonist character who goes to the Third World, by invitation - in other words, who is welcome, who behaves in a more or less dignified way and treats those who he encounters - whether he agrees with them or understands them or not - with a degree of respect," said Mortensen. "That's an already interesting and unusually refreshing movie story to come out of a mainstream Hollywood studio, especially considering what has happened [in Iraq and Afghanistan] since we shot the film."

Also refreshing was the lack of a love interest for Hopkins. Although there is a lead female Muslim character, Hidalgo does not use her as a love interest but rather a strong character who is conflicted between her personal needs and her culture.

Although Hidalgo respectfully deals with two different cultures, Native American and Muslim, Mortensen expected the film to come under scrutiny from many before they saw it because the two cultures have often been misrepresented historically.

"It's understandable that people leap to such conclusions before they see it because of the history, especially of big budget Hollywood fair," Mortensen said. "One in which you have seen in particular Native American culture and Islam or Arabs misrepresented and usually treated with very little respect. I understand people who conclude that and they see the poster in Iraq, or the area that is now called Iraq. It's going to be a jingoistic exercise."

Hidalgo tests Mortensen's post-Lord of the Rings success and will determine whether he can continue to make interesting films and avoid typecasting. Mortensen doesn't seem to be concerned so much about the financial success of his films as much as being successful at playing deep, interesting and thought-provoking characters. In this regard, he has continued his winning streak with Hidalgo.
Top of this page
Last edited: 11 August 2007 14:06:16
© The Eagle.