Lord of the reins 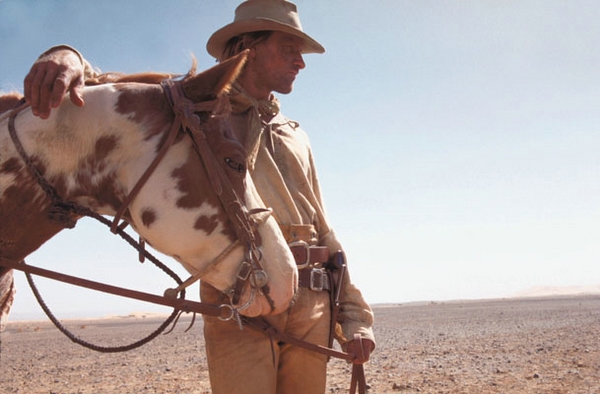 © Touchstone / Buena Vista Pictures.
We like to think the Grand National is the world's toughest horse race.

But it has nothing on The Ocean Of Fire, a 3,000-mile challenge across the treacherous Arabian desert.

Frank T Hopkins (Lord Of The Rings' Viggo Mortensen) is a half-Indian US Cavalry despatch rider. Having unwittingly delivered the orders for the massacre of the Sioux at Wounded Knee (1890), he turns to drink and ends up a sideshow attraction in Buffalo Bill Cody's Wild West Show.

Cody's claims that Frank is the greatest endurance rider in the world anger Sheikh Riyadh (Omar Sharif) who invites him to compete as the first foreigner in The Ocean Of Fire.

Despite the fact that Frank's horse Hidalgo is a mixed-blood mustang who is pitted against the finest Arabian thoroughbreds, the pair slowly earn the respect of the Sheikh and their fellow competitors and soon become true contenders.

Director Joe Johnston (Jurassic Park 3, Jumanji) keeps Hidalgo galloping along at a fair old pace. There is loads of great action -- my personal favourites were The Mummy-style sandstorm, a swarm of locusts and an unprovoked leopard attack.

For some reason known only to them, the writers felt the need to insert a tedious subplot involving the rescue of the Sheikh's daughter which only gets in the way of the action. And that, let's face it, is the reason we're watching the movie.

Ditto the touchy-feely analysis of Frank and the Sheikh's relationship. Whenever it steers clear of these areas and just concentrates on pure, undiluted action, Hidalgo succeeds in spades.

Mortensen, fresh from his heroics as Aragorn, delivers another manly performance as the rugged cowboy and is well supported by old pro Omar Sharif and Zuleikha Robinson as Jazira, the Sheikh's spunky daughter.