By - translated by Åse 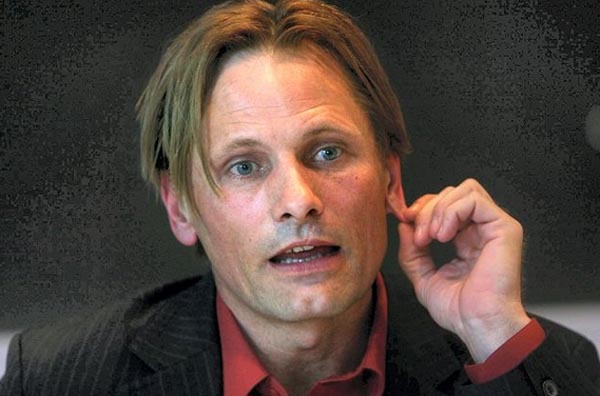 Alatriste Screening - Ringsted, Denmark 7.13.07
Image Hans-Jorgen Johansen.
© Dagbladet.
It is strange to be an actor, thinks Viggo Mortensen. It forces him to learn things which he otherwise wouldn't have done.

Ringsted: He has been in more than 40 movies, writes poetry, photographs, paints, has started his own publishing house and lots of other things. The Danish-American star Viggo Mortensen is in other words a very industrious man.

"And none of it has come by itself," emphasised his aunt, the local politician, Tulle Olsen from Vigersted, when this evening she introduced him on stage at Ringsted Convention Centre, where he was to promote the movie Alatriste, in which he plays the lead.

He is in fact a little bit lazy, he confessed at the press conference before the movie started.

"As an actor you learn something new everyday. I travel and learn about languages and culture, and I am usually lazy unless I am in a situation where I have to learn something fast, otherwise I won't do it," he confessed.

In the same sentence he also said that he had great plans about sleeping when he is in Denmark, but time flies, and he also eats too many Danish pastries. " But I believe I must have good genes, because I don't sleep enough, eat lots of chocolate and don't exercise. But it was hard for everybody to play in Alatriste. We had to exercise a lot, and that I only do if I have to," he declared.

The Spanish movie was released a year ago in Spain, where it became very popular and won many awards. But it will not come to the Danish movie theatres - here we have to watch it on DVD.

"And that is the movie company's fault," said Viggo Mortensen.

"They haven't been good and hardworking enough to promote it - if you don't do it then nothing happens. And then in the movie business they start to talk about how "it is not good enough". But for me it's a very important movie, and I think a lot of people will be able to see something in it. Even when they watch it for a second time," he remarked.

But a movie's success is partly due to luck - and the same goes for actors.

"I have been very lucky. I have many friends who work in theatres and movies and are very good, but they can't make a living off it. Talent is not enough - you also have to be lucky," he noted and then added that he would very much like to act in a Danish movie one day.

"I could see myself doing it, because it is always nice when you start something new."