Viggo on TV2 News in Denmark 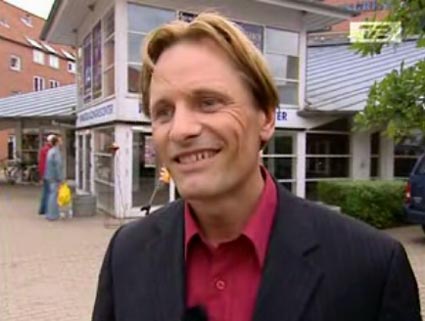 TV2 news, 7.13.07.
© TV2.
Welcome to another star, Denmark's own Viggo Mortensen. Welcome to the TV2 news. You are home in Ringsted to present your new movie, the Spanish Alatriste. Why does it have to be presented in Ringsted?

Well, if David Beckham can go to Los Angeles then Alatriste can just as well go to Ringsted, I think. But...no, it's because unfortunately it wasn't allowed to be shown in the theatres here in Denmark. So I'm glad to present it where people can watch it on the big screen.

And 850 people will be doing just that in a moment. And you're also presenting it in Ringsted, I believe, because you're from the Ringsted area. Well, I hope it is alright to be curious and ask what a Hollywood star does when he's on vacation in Ringsted?

Well, I'm sorry but I'm also going to see the movie with my Aunt Tulle. I've come to watch it with her. She hasn't seen it and she's a little afraid to see it alone because it's a little tough sometimes. But...I'm actually very proud of the movie. I think it has a lot to tell us about art, about history, and about people as they were in the 17th century, but also as we are today, as people are today. And it was a huge success in Spain, but they didn't know how to sell it and promote it in other countries. Unfortunately it hasn't arrived in the theatres but it's really good.

It's really good, yes. And therefore I'm also glad I can tell other Danes that it is released on DVD. Maybe you didn't know that, but it actually has been here in Denmark so everyone else can also see it. But let's hear what is your next film project?

I've done a movie with David Cronenberg, the second movie I've made with him. And it'll come, I think it'll come to Denmark in September or October. It is called Eastern Promises, I don't know what it'll be called in Danish...

No, we'll find out.....and now the signal has disappeared. Thank you Viggo Mortensen. Enjoy your vacation at your Aunt Tulle's home in Ringsted, and also the movie.
Top of this page
Last edited: 15 July 2007 09:20:50