A Trip With Viggo Mortensen Through The Heart Of The Province

By Robustiano Pinedo - translated by Graciela

Source: El Tribuno Salta
He came to work on a cultural and integration project with the native communities of Tartagal. 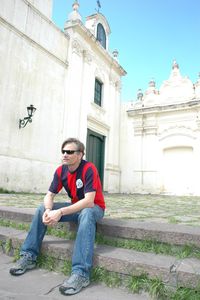 © El tribuno.
It's almost three o' clock in the morning. He is sitting next to the fire on a wood and leather chair. The "asado" (barbecue) is over. The people he was preparing mate for, two at the same time, have said goodbye. He is wearing a gray San Lorenzo goalkeeper's soccer shirt, and he throws a cigarette butt into the embers. Viggo Mortensen, 49, now has a needle in his hand and he starts sewing his red and blue flag, which suffered a passionate tear in the victory against Lanus: "I like to sew it myself."

He was in Buenos Aires for the opening of Alatriste, and on April 2nd he came to our province for three days to start a cultural project together with the native communities of Tartagal. Through his publishing house, Perceval Press, the Lord Of The Rings actor supports undertakings related to photography and popular artistic expression. "The idea is to help promote and preserve the traditions and the language of some communities," he explained.

He lived in Argentina between the ages of 2 and 11. Since then, he remains an absolutely passionate San Lorenzo fan. Before going into acting, he studied Politics and Spanish Literature.

The welcoming evening was long. It ended at the crack of dawn. Viggo made his bed and after breakfast he headed north in a convoy with three anthropologists, along Route 34.

In a gas station, he bought chocolates and candies to give out in the community, and four CDs to listen to on the road. "I have to catch up," he says about a small collection of National Rock from which he only knew some. "It has some by Charlie Garcia (an Argentine musician)".

Viggo Mortensen is a simple person. All his belongings fit in a white plastic bag: three San Lorenzo shirts, a black one, a spare pair of pants, and a toothbrush. In the back pocket of his worn out jeans he carries a "bombilla". "You have to be prepared," he said. He sat in the back seat and prepared mate from his own thermos. "I can easily get yerba (green leaves used for mate) where I live."

A road block near Finca de Chalican delayed their arrival for some hours. Behind the tractor wheel that lay in the middle of the road, you could see the leader of the picketers. He was wearing a black slanted beret, decorated with a red star. He had a beard of a few weeks, a military vest and a stick in his hand, which gave Hector Santa Cruz, the maximum authority in the road block, a "Che Guevara" look. "It may take about an hour,", he solemnly declared, while he repositioned the coca leaves in his mouth. "The problem is that the school is coming to pieces here," he explained. No way. The scientists' attempts to explain that their time was precious were always met by: "No one can go through."

A few blocks away is School 39, Pablo Soria. Ricardo Caseres, the principal, did not know about the road block, and complained to Santa Cruz, who acted as a school guide, that he had not consulted with him or with the parent committee: "We have to work together," he complained. In the meantime, the actor was asking questions to the teachers and listening attentively. "The classrooms get flooded every time it rains," explained kindergarten teacher Angelica Barro.

Back on the road, someone recognized Viggo. He signed autographs and gave out San Lorenzo pennants to the families of the picketers. "I'm sure nobody was a San Lorenzo fan, but maybe some changed their mind," the protagonist of A History of Violence said hopefully before continuing on his way to Tartagal.

"But what is he doing in Tartagal?" Susana, a neighbor that had rushed to the park as soon as she heard the news, asked in amazement. She was holding her daughter in one hand and a camera in the other. She was waiting to see if she could get the actor's attention for a couple of seconds, but by now, he was lost in the crowd that surrounded him.

Five minutes before, he had accepted an invitation from Elda Juarez Eslada, a teacher, to visit the tent in which they were holding a protest. "I don't like to give an opinion about something that I don't know, but I can listen," he said and he rushed to finish the coffee he was having in the hotel in front of the park. In no time, he had run out of San Lorenzo pennants - he had 30 -, and there were two local TV cameras. Rescued by the anthropologists, and without having rested, the convoy arrived at the community at night, just as the first stars were beginning to shine. Back in Tartagal, at around two o'clock in the morning, after the first contact with the people involved in the project, Viggo met with a group of fans that were waiting for him to sign copies of The Lord of the Rings.

Patiently, he interrupted his dinner and kindly accepted all the requests.

The following day started very early. Sporting a different type of San Lorenzo shirt, the actor rushed out and jumped on the already moving car, eluding a swarm of female fans. "I'm sorry, Viggo, but we don't have time," one of the anthropologists apologized. "I understand," he said, flying the San Lorenzo flag through the car window, and tearing the stitches he had previously added.

After a long day in the company of the members of the community, it was time to return to Salta. Viggo drove the entire 400 km (about 250 miles) that separate Tartagal from the province capital. The trip was quiet, with plenty of mate and talking. "It is hard for me to be in a relationship with this profession," he says while he exhales the cigarette smoke, which flies out of the window. "It is difficult for me to get to know someone thoroughly."

More than 300 million people around the world have seen his movies. His career has brought him into contact with very important people in show business and in politics. "I'm not interested in that at all," he states. "Fame has its price, but I don't pay attention to it," he says while he assures that his car is the same truck he's had since 1982.

The following morning he flew towards Buenos Aires. At night, he left for the USA; he had to start working on the character of his next movie. "I'll come back," he said before taking the airport escalator. I began to lose sight of him. He had a bombilla in his back pocket, a white plastic bag, and a San Lorenzo flag wrapped around his shoulders
Top of this page
Last edited: 1 June 2007 15:47:59