By - transcribed by Graciela 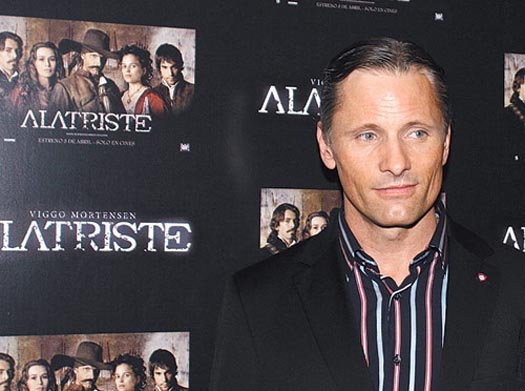 Argentina Press Conference 3.28.07.
© DyN-Télam.
VM: It did not take too long for me to accept the role, and it didn't take too long before I started feeling scared. I'm always a bit scared before I get used to a character, and before I get to know the people. I had a good example in Tano for Capitan Alatriste. He is a guy who is never scared. He never gives in. He likes challenges. And we made it. And Ariadna and the other actors, among the best in the Spanish movie and theatre industry, helped me a lot. I'm very happy that I accepted it.

I did it because I liked the script a lot. It was a good story and any actor that would physically fit the part, in Spain or in Argentina too, any actor that could speak Spanish would have loved to play this role if he had the chance. From the beginning, I was convinced that it was a good character because he interacts with all the other main characters in the movie, and he also has a very nice relationship with the character played by Ariadna, actress Maria de Castro, so I never hesitated.

Was it hard to play a period character?

VM: I've done it before (smiling), with a sword also (more smiles), and also on other occasions with characters that lived in the 19th century, and so since I was already familiar with something like that (more smiles), it was just a matter of changing it somehow, but for Lord Of The Rings I also had to adapt my English accent. So I was a bit scared, I constantly admitted that during the weeks before the actual shooting, but then I got used to it, first to the accent and then to the rhythm, which is slightly different, and I liked it. I liked it a lot.

[It sounds like somebody asks him if he has been offered any projects in Argentina.]

VM: There was one in particular that I liked, but I couldn't accept it because I am very busy; and I know that I am very lucky because there are many actors, including some of my friends, that sometimes cannot earn a living in this profession, so I'll have to wait, and I hope that they can wait.

[A reporter asks about any future exhibitions.]

VM: I have one next year, at the end of 2008 in Denmark, I'm going to show paintings if I can finish them, and possibly one next winter, that is your summer, in Iceland, possibly photographs, I don't know.

And in Buenos Aires?

VM: Not yet. It's not in my plans. Maybe, sometime. I spoke with someone once, but...it's bad luck to talk about... (something that you are planning)

What epic character from Argentine history would you like to play? And looking at the world today, who would Alatriste be?

Some stories have been filmed. Just before I started this trip, I found in my mom's house an edition of Martin Fierro that I had read here (in Argentina) when I was 8 years old and I brought the book to look at it, to look at the pictures, and I had written something, I had underlined a few phrases, and I remember my mom had told me: "Don't do that; it's a nice book." And I always do that in my books [he says something about lending a book to Tano but it's not clear as he is mumbling]. As a child I remember that: Martin Fierro, Patoruzu (a comic book character), Don Segundo Sombra (a book about gauchos); I left when I was 11. And the San Lorenzo Matadores (killers), I remember those more than Martin Fierro (laughs), the Carasucias (dirty faces - San Lorenzo again).

There are characters like Alatriste that... although he talks in a different way, he is a lot like the "gauchos", Alatriste and the "bravos" in Spain, I mean, his friends, they were tough and very similar.

[He goes on to explain that the "bravos" in Spain were the same type of person as the vaqueros in Mexico or the cowboys (John Wayne) in the U.S. or the gauchos in Argentina, while Ariadna looks at him baffled.]