"I'm an actor so I'm not completely adult"

By Amalia Sanz - translated by Remolina

Source: La Voz
The star, famous for playing Aragorn in the trilogy The Lord of the Rings, is in the country for the premiere of Alatriste, a Spanish film based upon the character created by Arturo Perez Reverte. A conversation with the celebrity with a "porteño" accent. 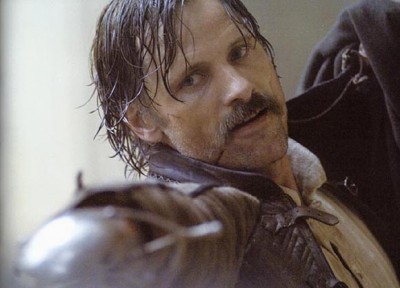 Image Alatriste - La Colección Espiral.
© Ocho y Medio, Libros de Cine.
Let's say it once and for all: there are few things that interest and stir up Viggo Mortensen - the Hollywood star, Aragorn in The Lord of the Rings, the main character of David Cronenberg's last 2 films, an involved artist and with clear-thinking opinions - more than the campaign of San Lorenzo de Almagro, his soccer team.

During the interview, one of every three sentences refers to the blue-maroon club, with an extreme insistence that he admits is obsessively passionate: "Don't make me continue talking about soccer, it's you who are making me talk, it has no interest for me," he says making fun of himself in a perfect "porteño" accent. And this is the second surprise for those who don't know: Mortensen spent his childhood in Argentina and in the chat he mixes idioms and local words ("che", "¿vistes?", "cancherito", "qué se yo", "bostero"), with certain "porteña" musicality, learned in those first years, those years in which you don't forget anything you've learned.

Today Viggo has returned to Buenos Aires to promote Alatriste, a Spanish mega-production that goes through 25 years in the life of the famous Captain created by Spanish writer Arturo Perez Reverte. Through the main character of Alatriste, the film - co-starring the beautiful Spanish actress Ariadna Gil and directed by Agustin Diaz Yanes - describes the last decades of the Golden Century, in which the Spanish Empire, dominated by corruption, devastated by wars and oppressed by the Holy Inquisition, passed to be only a shadow of what it once was.

"I never hesitated about making this film," he proudly admits. "As soon as I received the script, I phoned Tano (Díaz Yanes) to tell him we could start whenever he wanted. It was a very good tale. No Spanish-speaking actor could have refused playing this character."

Even so, did you have a fear of playing this character?

"Yes, the weeks before the filming I was really frightened. I was afraid of not doing it well and that all Spain would kill me. It's a very loved book there and the fans have very clear ideas about the characters, the clothing, the locations, the scenes. Fortunately, Tano showed very well the essence, the spirit of the book and the time. As well as that the basis was there - my Castilian (Spanish)- so that encouraged me to do the film."

Being afraid is part of the adrenalin in a new project?

"I'm terrified about all my characters. It's a little difficult if you're not, I'd feel I was doing the same thing over and over or that I'm a layabout. In general I don't distrust directors, nor projects, I only distrust myself. I'm a kind of paranoiac. This time I got everybody mad: I phoned people in the middle of the night asking about my doubts or questions. They all were very patient with me. I'm the actor who plays Alatriste but, clearly, I'm not as bold as he is."

But what you show us is that, beyond that fear, you really enjoy filming.

"You're right, I always enjoy myself. In this case, we enjoyed filming Alatriste a lot, we all felt that we were doing something once-in-a-lifetime. It was hard and long filming, but I was always in the mood for continuing the job. We were filming all day, but we were out drinking at nights. So, there wasn't Anglo-Saxon behaviour at all."

Furthermore, you have had the chance of playing a Tolkien hero and a gentleman of the Golden Century.

"I think deep down I'm actor so I don't have to be completely adult: I like to play as I did when I was a child, but now it's with more and better production. It's wonderful. People complain about hard scenes in the water, mud, swords, but on the contrary I like getting dirty the most, hurling myself to the ground or running amongst the horses. It's risky, because we don't use doubles to play characters in the risky scenes and you've got to be careful not to hurt anyone, but it is the most entertaining job, without any doubt."

The film shows the decline of the Spanish empire and you have compared it with the U.S. of today. Do you think there is any resemblance?

"Empires always fall and, unfortunately, their citizens always get swept away with lots of suffering. Without any doubt we're seeing it in the U.S. If you spend the National Treasure and use your country's blood as quickly as you can - this is what Bush did - you don't have any future as a world power. All things are weak and it is not a surprise for anyone to be like this."

You're a poet, a photographer, a painter, a musician, you own a publishing house. What are your priorities in your work?

"I combine acting with my job at my publishing house, Perceval Press, and the rest of the things. They are all branches of the same tree. It consists of looking at what is around you, paying attention to life, that passes so quickly. I pay attention to things, and that is an artistic behaviour. That look is an artistic one. To be an artist is no more than paying attention to things and absorbing them in some way. At the publishing house we can also publish the things we really like, for example, an anthology of new Argentinean poetry. It's a new project and I'm very pleased with it."

Also aren't you getting a new record ready?

"Yes, it's almost finished, only left to mix it. It's an instrumental recording, I play the piano and my friend Buckethead, who's a very prestigious and gifted musician, plays the guitar. It's a very sensitive and simple production."

And amongst all these projects, you've said more than once that you would like to film in Argentina.