"Now Even My Son Wants To Get To Know Argentina"

Source: Gente
He returned to visit our country yet again, the place where he grew up from the age of 2 to 11.

"I can't stop returning," one of the most sought after actors in the world assures us, as he arrives to promote Alatriste, the most expensive movie in Spanish film history. Among other activities, he visited the Nuevo Gasometro (San Lorenzo's stadium) and met with GENTE Magazine. Here he talks about how, when he was a boy, he liked Susana Gimenez, explains why for the moment he won't personify Un Guapo del 900 (translator's note: this movie is an adaptation of a famous play about a political leader and his "guapo" [bodyguard] who goes to prison in order to save his boss' reputation) and comments that he needs to "stop the ball rolling, sip a bitter mate and decide what's next in my life."

He slips out of the Hotel Sofia, climbs into the taxi that will take him to Susana's show, autographs a book for her, shows us the small picture of a San Lorenzo player that he drew and colored at the age of 9, and fields our questions. 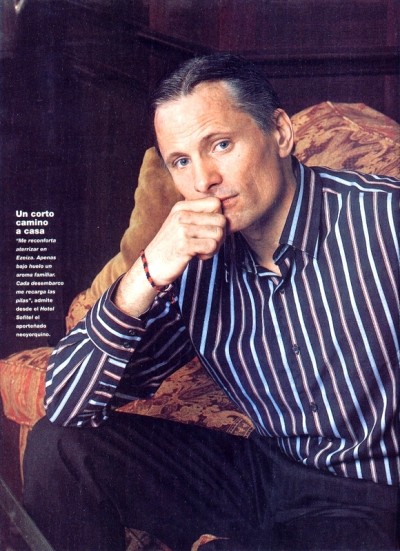 Gente Magazine, April 2007.
© Copyright 2005 Atlántida.
Excuse the daring but, sincerely, did you come to Argentina for the screening of Alatriste or to watch a San Lorenzo game?

You mean that wholeheartedly?

Well. El Ciclon (San Lorenzo de Almagro's nickname) and the heart are pretty close to each other. (He laughs)

Let's say it was a pleasant coincidence (adds Viggo Peter Mortensen Jr., age 48, as he graciously accepts the San Lorenzo pin this journalist offers him, swiftly attaches it to his lapel and offers his thanks with a measured handshake.)

I had to come before the screening on Thursday, April 5th. In truth, I always want to come visit. I can't stop returning. Last month I bumped into Orlando Bloom in a Los Angeles club, "Now where are you off to, Viggo?". "Mexico, Chile and Argentina." "Argentina?! It's so beautiful," he cried, "You were holding out on me! It has the most beautiful women on the planet. The city center is a jewel," he exclaimed! "You see that you should listen when I speak, elf?" I replied.

Alatriste was the beautiful and great excuse to return. I feel proud of the movie I made and of the people I made it with.

How did you come to play the valiant and brazen Diego Alatriste y Tenorio, portrayed in 5 Arturo Pérez-Reverte novels? What seduced you into accepting the role?

That's easy. The script. I hadn't read the books. Ray Loriga, the Madrid writer and friend of director Agustin Diaz Yanes approached me with the script, since we worked together in 1995 on My Brother's Gun, where I played Juanito, a strange Argentinean with an old-fashioned manner of speech . I read it without preconceptions and discovered an extraordinary character, who also meshed with me: blue eyes, clear gaze, 6 feet tall, Spanish speaking. And I accepted.

"Really?" Tano...Yanes asked me in astonishment, aware that, even though he had yet to see The Return of the King, the third and last part of Lord of the Rings, I had been receiving other interesting American options. "Seriously. If it's a choice between an Oscar and a good script, I choose the script," I replied. Within 24 hours I called him back. "Are the local actors upset? My accent..." Quickly, he retorted, "In Lord of the Rings didn't you change the accent of your English? Well, now you'll just have to change your Spanish accent for one that's suited to Northern Spain. That's that."

So you got organized and set sail for Spain for the time being?

Sure. You know me. I always do the same thing: I research characters from the cradle to the very last page of the script. Besides, outside of the academic world, nobody had depicted Imperial Spain in the 17th century, in spite of the enormous legacy it left the world. Over the course of four weeks I read biographies about soldiers, looked at paintings by Velazquez, buildings, landscapes, streets, practiced with swords, tried on boots, the wardrobe, adjusted the hat, the cape. The adaptation turned out great. We filmed for 120 days. By the way, during my time there I enjoyed Ricardo Darin in Art. Excellent. I'd love to work with him. Well, and the general artistic level on Alatriste...amazing. Joder! (Damn! ) It was an incredible challenge, a severe, tragic realistic history. I celebrate the experience. 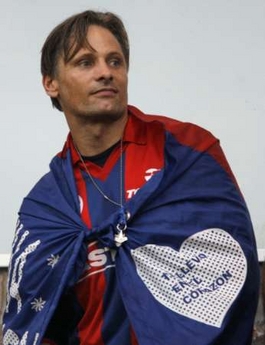 Viggo at the San Lorenzo Game: 4-01-07.
© Reuters.
Your use of the word 'joder' and your always obvious Argentinean accent forces us to point out that Spaniards and Argentineans are similar.

Apart from the language, where they play hard and fast (he puts away his box of Marlboros and takes out a piece of gum). Then, it depends on the place. Cordoba, Rosario, Resistencia are calm, like Cadiz, Sevilla, Ubeda. In Buenos Aires and Madrid people don't sleep much, work hard, and wholly appreciate what life offers.

That seems like an apt description of yourself, seeing as you haven't stopped moving since getting off the plane. Besides the obvious publicity appearances (interviews, trips through the canals, the premiere in Cinemark de Puerto Madero, etc.) you add the visit to Nuevo Gasómetro, your appearance at the homage to Andres Calamaro, the inauguration of the (San Lorenzo) photography exhibit "A Saintly Century, 100 Years of History", and a trip to the north to explore the wichi culture.

Regarding the wichis, I go to visit them cautiously, so I don't invade them, and with the help of anthropologists, to give them the opportunity, through photographs and words, to diffuse who they are. Through my editorial, Perceval Press, I try to give voices to people who have been forgotten. And it's true; I never have enough time when I visit.

Do you follow the news in Argentina when you're out of the country? For example, do you know about our government's economic agreements with Hugo Chavez and the power struggle that Nestor Kirchner (president of Argentina) maintains with George Bush and the International Monetary Fund?

I get some news. I also lived for a year and a half in Venezuela and I don't remember much. I don't know if what you're mentioning speaks well or poorly of Kirchner, but it seems to me that he has to follow his own advice, that the country and its government should be free to have their own opinions and that they shouldn't allow themselves to be pressured by the president of Venezuela, the United States or anybody else. Argentina needs to think for itself.

Does Henry, your son, whose initials you have tattooed on your right wrist, think about Argentina? Have you transmitted your passion for the country to him?

Henry turned 19 and now even he is interested in visiting the country. When he was little (he interrupts himself upon seeing a bus full of River Plate fans [a rival soccer team] which is advancing toward the Monumental [Argentina's national stadium, where the 1978 World Cup was played] Ahhh...they are playing for the Libertadores Cup today? Luckily, they let Fernandez "The Cat" go and also Ramon Diaz, and we hired them, ha... When I was a boy... (he reacts suddenly to the chants) We're going to get them on the 13th of May!... Sorry.

When Henry was a boy I read to him in Spanish and Danish so he would absorb them. I felt that perhaps my experiences would be useful to him. I lived here from age 2 to 11 and even though I was gone for a quarter of a century and returned in 1995, the language stayed in my head and in my soul, even though for a while my vocabulary was rather poor and I used old slang, which Henry ended up with too. So much so that he discovered his skill with languages and learned to read and write Japanese while in high school. A few days ago he said to me in a Mexican Spanish accent, "I want to learn it perfectly." Maybe I'll bring him soon. 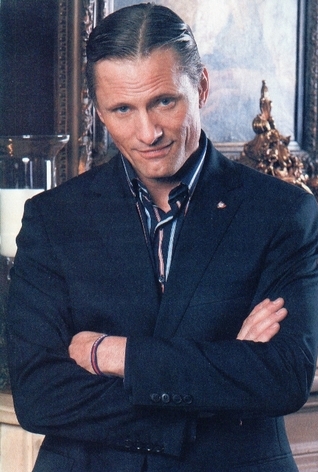 I think he's a cuervo. He uses my t-shirts. But I'll let him choose. I love football and its practical jokes between fans. However, I don't agree with hating someone just because they are wearing a different soccer shirt. Football isn't about violence. My father, whose name is the same as mine, is for Nuñez, and my mother, Grace, is for Boca.

Boca. Did they really suggest you film Un Guapo del 900? When you will be filming here is apparently of national interest.

How did you find out?

Because of your immaculate attire and your gelled hair.

(He laughs) Seriously, how did you find out? Out of respect, I wasn't going to mention the project, but it somehow leaked out. When I was playing Alatriste, I kept thinking, "He's like a compadrito, like Un Guapo del 900, like an American cowboy. That's logical, if both are derived from the Spaniards of the Golden Age." And then they offered me the role. But things piled up on me. I'd just finished Eastern Promises (by David Cronenberg, due out in October), I'm starting two movies (Good and Appaloosa) and then there's the publicity stuff. The only way to rest and think about how to proceed is by yelling "Stop!", and it's not going to be before August 2008, or later. It's as bad as stopping a train. Of course, you start to break and you need two kilometers to stop completely. So I've asked not to be sent more scripts. I don't want to promise anything I can't fulfill. Un Guapo del 900 is an incredible story. Many writers, including Borges, have given us stories from that era that are very interesting from a social, political and historical point of view, but...I have family and activities that I'm slacking on. I'm referring to painting, poetry, photography, music. I also don't sleep. I need to stop. I don't have enough time for everything. I even work on Sundays. Life is short and I need to stop the ball, sip a bitter mate - it's never missing from my suitcase - and decide how to proceed.

You mentioned the word family. Since your separation/divorce almost a decade ago from singer Exene Cervenka - leader of the Punk Band X - you haven't been known to have an official relationship, even though you've kissed goddesses onscreen like Sandra Bullock, Gwyneth Paltrow, Liv Tyler and, including, if we're not mistaken, Naomi Watts herself. Do you plan to try again or has solitude trapped you?

True, you're not mistaken about Naomi. Anyway, if I had a relationship I wouldn't tell you. To have a relatively normal and sane relationship I've learned that it's preferable for people not to find out. And I try to keep it to myself.

As a kid, did you like any Argentinean women?

Obviously, several. Famous ones? Susana Gimenez, when her career was just starting. Gorgeous. An icon. I was about 10 and I patently remember her. Her and the picture cards of Los Matadores. Did I tell you that yesterday my idols gave me a signed blue and red t-shirt?

That gives us a nice closing to the interview. And if it looks like San Lorenzo de Almagro will win the championship soon, then what?