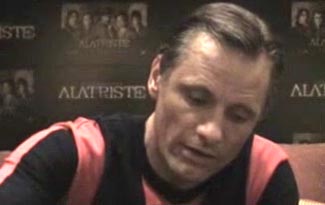 © ZonaCinemania.
The following is a transcription of a videoclip posted on the ZonaCinemania.com site during Viggo's promotional trip to South America. 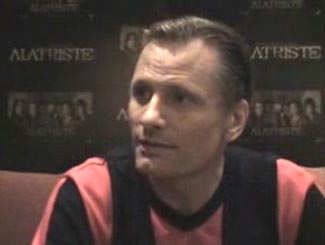 © ZonaCinemania.
What was it like to embody a literary character as popular as Alatriste?

(The character is) very nice, really loved, very popular, which from the beginning gives you a certain amount of public interest; you will see when the movie comes out. On the other hand, the problem is that they may have very predetermined ideas about what the character should be like, the costumes, the spirit of the story and of those times, in this case, the Spanish Golden Age.

What was the reaction of the Alatriste fans when they saw the movie?

They liked it, and some fans of Arturo Perez Reverte's works have thanked us for taking the Alatriste idea to the big screen, it's feeling and spirit, and finally to expand a bit more what people usually know about that period, the Black Legend.

What was it like to speak Spanish throughout the movie?

Because the guy comes from north León, those people speak a bit slower...it's also a combination of what you can find now in León, but trying to imagine what a man from León would have been like at the time. The man of few words, who is very careful about what he says, who doesn't trust anybody. True, it's kind of flat. I had to work the rhythm more than the accent, it seems to have a flat intonation, but then when you get used to it, you realise there is a certain internal music to it. 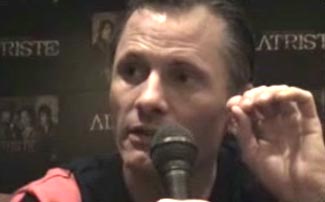 © ZonaCinemania.
What was the physical training like for this role?

I worked not only for the swords, including the "vizcaína", but also to get used to the character. I went to the sword fighting rehearsals with those boots, the hat, the cape, to get used to handling the cape, to swirl it around, just like the "gauchos", that's where it comes from.

Where do you feel more comfortable, in small movies or in blockbusters?

It depends on the director more than on the language or the country where it is filmed. It has to do with who is in charge, the boss, the director.

Were you afraid of being associated with Aragorn forever?

I suppose that after the second movie, the second part (Lord Of The Rings), people started telling me: "It's going to take some time for you to do something else, and people won't be able to associate you with another character." Maybe because Alatriste has a sword... but it's something different, it's not a fantasy movie, a fairy tale. It's a tough story, and the guy is heroic but at the same time it's a man who is difficult to understand and love.

If people can't help thinking about Aragorn when they see me on the screen playing another character, well, there's nothing I can do about it. The truth is that without the success of Lord Of The Rings, I wouldn't have been offered this role. 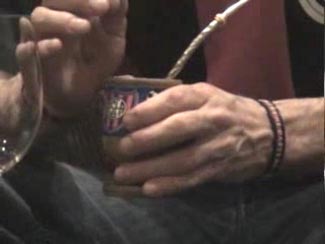 © ZonaCinemania.
Do you always have "mate"?

Always. I think it helps me stay active; for example, during the shooting of Alatriste and Lord Of The Rings, which were long shootings, I was the only one who never got sick, and I think it may be partly genetic, but I also think mate is very healthy. We can do a bit of advertising here. (shows his thermos)

Do you share it with other people on the set?

Well, since I like it unsweetened, very few people like it, they call it "compost",...but in Spain some people tried it, for some I had to add sugar. In New Zealand and USA, they tried it, just to be polite, but they didn't really like it.

What do you think about Ramon Díaz (current San Lorenzo coach)?

He is doing a good job, I really like it, I like his nerve. I like that he tells the players and the fans: "Piano, piano" (from Italian: slowly), so that we don't think about the future a lot. First, this Sunday, then the next one, and so on, little by little. We'll see what happens.
Top of this page
Last edited: 2 April 2007 04:29:15
© ZonaCinemania.