By Jose Emanuel and Ytaelena Lopez 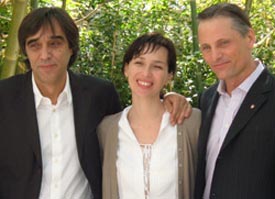 And yet, the movie by Mexican director Guillermo del Toro was just one of several films (Children of Men, Babel, The Science of Sleep) created or carried by Latino talent that contended for the honour.

Then what to make of Spanish director Agustín Díaz Yanes' Alatriste, a film based on the most popular series of Spanish language novels since Don Quixote whose swashbuckling, Spanish-speaking lead is - Viggo Mortensen?

Mortensen (A History of Violence, Lord of the Rings trilogy) plays the rugged, brave and astute Captain Diego Alatriste, a swordsman trying to keep his integrity while hacking his way through the not-so-glorious last days of the Spanish empire. The film debuted regionally at the Miami International Film Festival, a week-long event focused on introducing Latin American and Spanish films to US audiences.

"If Viggo had not accepted the role, I wouldn't have done the movie," said Yanes. "The guy is a great tio."

Mortensen, raised between Denmark and Argentina, is no stranger to acting en español - in 1995 he starred in another Spanish movie, Gimlet, which didn't make huge waves this side of the Atlantic.

Mortensen's hush-voiced Alatriste, however, not only had Spanish audiences lining up outside of their theaters last fall but also in Miami before the films first showing on Monday.

"Cheers for all the 'cuervos' in the house," said Mortensen to the crowd, flexing his street cred with an obscure reference to Argentine professional soccer that only a few people got.

"He not only brought fame and publicity but also did a great performance," Yanes said. "I want to see how the American public reacts to this movie... If I see people going to buy pop-corn in the middle of the movie, I will shoot myself."

The film's east coast debut in Miami highlights the growing role of the city's 9-year-old festival. Called the "Spanish Sundance" locally for its commitment to debuting Spanish-language films, it has struggled to garner the international profile of its big brothers in New York and Utah.

"I'm very proud. People always need to put names on things," said festival director Nicole Guillemet. "I would like Miami to be the showcase for the best Ibero-American films in the U.S."
Top of this page
Last edited: 14 March 2007 10:10:56