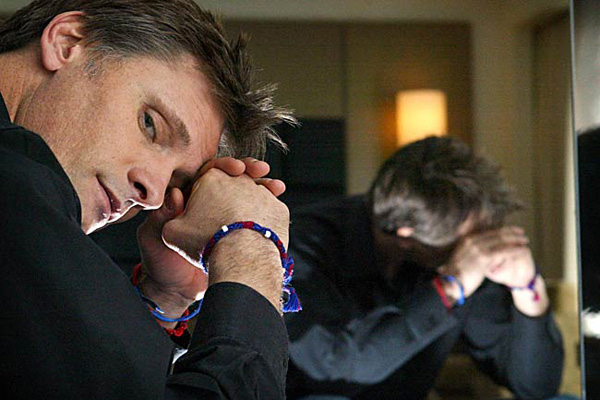 Sydney, Australia 2006
Image Toby Zerna.
© Newspix.
The character you play in the 17th-century war epic Alatriste is pretty much a national hero in Spain. How did the Spaniards react to an outsider taking this role?

Obviously it was mostly positive, because apart from a couple of American movies, there's no movie that did better last year in Spain. It's a great character - subtle, kind of tragic and beautiful. I always do my best, but I was especially conscious of that because I'm sure a lot of Spanish actors would have liked to have played it. I mean, people in Spain, if I walk down the street, they're gonna yell out "Alatriste!" not "Aragorn!" It's a big deal to them. So I was aware of the fact that there would be naysayers.

You're working hard behind a film many would see as just foreign or arthouse fare. Is it not getting the attention you believe it deserves?

It was a shame, I thought, that they weren't Spain's representative for the Oscars. For a movie that did so well, they've done nothing outside yet. Aside from Pedro Almodovar, there isn't really anybody from Spain who's mastered the art of putting a movie out there so it can be seen. A lot of people have said to me, "Well it must not be a very good movie since it hasn't come out". And I said, "Well, no, it's just that they haven't found a way to do it yet". It shouldn't be that hard for them, if they do things halfway right, to get the movie seen outside of Spain.

Isn't the point of casting Viggo Mortensen to help sell the film internationally?

You would think (laughs). I'm waiting to see what happens.

Were people telling you not to do this Spanish film, that there were more important projects?

In a way. In so many words. People here in the United States anyway. But it was a great story. That's good enough for me.

Aragorn has you typecast as a hero, but Alatriste is rather flawed.

In the movie, you don't really see him win much at all (laughs), and I like that. It's like, even the best, whether it's a swordsman or a bullfighter or just a person in life, you can have a bad day. You can be very good at your job, but it just might not go your way. That went with the tragic nature of the story, which has everything to do with pride. This is a King who's obtusely determined - not unlike my President now - to do whatever he wants to do regardless of how many obvious signs there are it's not the right way to go.

Why does Alatriste keep fighting for this decaying empire? Are soldiers in Iraq asking themselves that same question right now?

I would bet you that - like Alatriste and his friends - the vast majority of Australians and Englishmen and Americans and Canadians serving in Afghanistan and Iraq, are mostly concerned with their friends, with their comrades, their fellow soldiers. There may be a certain amount of national pride, but I would bet you that the main feeling they have is to those serving with them. One - you said you would do a thing, so you're keeping your word, even if you're not in agreement with the tactics. And two - your friends are there. I mean, you wouldn't live with yourself if you didn't back them up. That's really what it's about.

Do you have an unconventional approach to acting?

I'm not sure. Only in the practical, going-to-work things. I like to take care of my own problems, shoulder my responsibilities. I don't have a bevy of people assisting me and filtering what I hear or what I say. I'd rather be overworked and underslept and have a good idea of what's going on. Maybe that's a little unconventional. But there's enough miscommunication in the world and at work for most people anyway. Direct communication and contact with people is the best way to ensure everybody's on the same page.

How many years have you been acting?

Does 50 carry any kind of weight?

No. I mean, I guess, ask me that day (laughs). But I don't worry about it that much. I like birthdays because they make me revisit things, like New Year's Day does. I like it quiet for my birthday, I don't like to make a big thing of it. But maybe my 50th I should do something, I dunno.

Has your life, post-Lord of the Rings, settled down?

For a couple of years after the films had come out, it was a pretty high tempo. But in the past few months it seems like I've been able to walk around unnoticed a little more, which I like. Not that I don't like talking to people, but it's better for just getting on with the day. I'm sure it has to do a lot with the choices I've made - I haven't done the biggest movies I could find one after another, which was an option after Lord of the Rings. But when you choose to go with your heart rather than career ambition, then your star tends to wane a little bit. If what you want is to be super-famous and stay there, you're gonna lose that. But what you'll gain is some peace of mind, and some perspective on the real world, and just the idea of being another person who's eventually going to die. The more you're in that insulated, glossy, unreal place, you can lose perspective, and I've certainly seen people do that - unravel. There is a price to be paid.

Can the price be worth it?

For some people it's worth it. Or some people decide "I'm at a certain age, I'm gonna grab that golden ring. I'll always regret it if I don't live the high life, so I'm gonna do it for a while". Some aspects of that can be interesting, the places you get to see and the access you might have - someone might be more likely to let you into a museum late or a national forest, whatever you like, if you're a well-known person. But you miss a lot when you're that wrapped up in promoting an image of yourself.

You went to Russia to research for the new David Cronenberg film, Eastern Promises. Were you recognised there?

Russia is interesting because I don't look that different from a lot of people there. And probably the last thing someone's gonna expect is to see Aragorn riding the subway in Moscow, dressed just like them and minding his business. That was blissful. There was only one boy that recognised me the whole two weeks I was wandering around the country. And that was my last day there. It was just a freak thing. He looked at my eyes, and I think he'd seen Lord of the Rings 500 times, and, even though I didn't have the long hair and the beard, he was sure.

You speak English, Spanish, French and Danish. Don't tell me you speak Russian too.

(Laughs) I learned enough before going that I could sort of read road signs or metro stops and things like that. Like a little kid, very slowly and awkwardly, but I could do it.