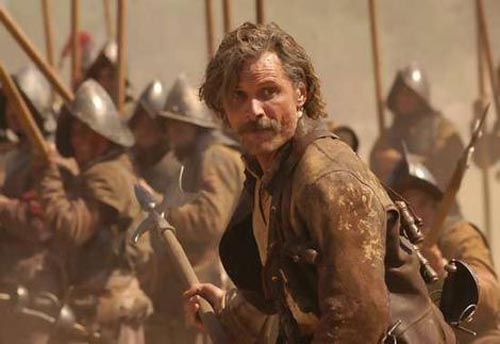 © 20th Century Fox/Estudios Picasso/Origen ….
Viggo Mortensen is on a movie mission. He's so keen to spread the word about his new film, Alatriste that when he runs out of time and has to catch a plane, he rings back when there is a delay at check-in because there's just so much more he wants to say.

The movie, screening at ACMI's La Mirada Spanish film festival, was made in Spain, and in Spanish - which Mortensen speaks fluently. It is based on a phenomenally successful series of historical novels, and was a big hit in its homeland. Now Mortensen hopes it will find an audience worldwide, although he's more than a little frustrated by its slow progress into overseas markets.

He is passionate about every aspect of Alatriste: not only the film itself, its central character, and the experience of making it, but also about what it has to say of history and culture. This is a sore point for him. Everyone, Mortensen says ruefully, has heard about the Spanish Inquisition - usually via Monty Python or Errol Flynn swashbucklers - but, too often, that's where general knowledge of the Spanish Empire of the 17th century begins and ends. With a cliche.

Even in Spain, he says, the situation is not much better.

Alatriste draws on material from the first five of the Captain Alatriste novels by Arturo Perez-Reverte, two of which have been translated into English. They revolve around the adventures of the title character, a soldier in the first half of the 17th century, who becomes a sword for hire after leaving the army.

There's a swashbuckling element with action, swordplay and combat. And the swordmaster on the film, Bob Anderson, also worked on The Lord of the Rings. But there is also a good deal about character and individual relationships, about art, intrigue and court politics.

At the beginning of the movie, Alatriste is entrusted with the care of a dying soldier's young son, and he takes this charge seriously, bringing the boy up as best he can, and also trying to help him appreciate art and literature: he does not want him to have a soldier's fate. Alatriste has a relationship with a beautiful actress - played by Ariadna Gil (the mother in Pan's Labyrinth) who loves him, but is ambitious.

One of Alatriste's good friends is the poet Quevedo, a historical character: a fine performance, says Mortensen, from Juan Echanove. One of the things that was great about the film, he says, is the size of the cast: "Normally I would have had to have made half a dozen films in Spain to work with so many great actors and actresses."

Another cast member is Blanca Portillo, who can be seen as the short-haired neighbour in Pedro Almodovar's Volver. She plays, in an interesting twist, a male character, a member of the Inquisition. There's something ambiguous and intriguing about the performance. There was criticism of the casting in Spain, but Mortensen regards it as another example of the director's willingness to do things differently, to find a less obvious way to depict a character who exercises power behind the scenes.

Mortensen, who has already made two movies in Spain, lived in Argentina until the age of 11. But he had to work hard, he says, to modify his Argentine accent, to make his Spanish appropriate for the time and the character. As part of his research into Alatriste and his origins, he went (after first checking with Perez-Reverte) in search of a location that would help him with authenticity.

"I found an area in the north in the mountains of Leon province, in north-central Spain, where people seemed to be like this character. They're a little cautious, they don't say much, the rhythms are slower, and when you go into one of these towns and you walk into a bar, it feels like you're in a Sergio Leone movie. Everyone shuts up as soon as you come in, and you need to go back several times over a period of days until anyone will really speak to you very much."

And, to deepen his understanding of the period, he read widely, in history, poetry and drama. This is the time, after all, of an extraordinary flowering of Spanish culture. Theatre was universally valued and people in Madrid, no matter how poor, took themselves off to the theatre every day, Mortensen says. The film spans the eras of Lope de Vega and Calderon, Spain's equivalents of Shakespeare
.
Mortensen also went in search of art. He visited galleries, going to the Prado and further afield, because he also wanted to look at Flemish and Dutch art of the time. One of the best Flemish and Dutch collections, he says, is in Denmark, so he took himself there as well. The paintings of Velazquez are a touchstone for the design and lighting of the film. Alatriste's director, Agustin Diaz Yanes, was an academic before he became a filmmaker, specialising in history and art of the 17th century.

Research and the opportunity to make discoveries, Mortensen says, is what he appreciates about acting: his work is about "what you make of it after you're lucky enough to get the job".

It's not just the details of performance, it's much more.

"Do you want to focus on mannerisms, or do you want to keep expanding?" Making a film such as Alatriste is "like going to a specialised university and getting paid for it. It was a great education for me."

Mortensen would like to work with Diaz Yanes again. In the meantime, he has just finished a second film with director David Cronenberg, titled Eastern Promises. Cronenberg, he says, is a wonderful director, "and he just gets better and better.

"I think this one will surprise people a little bit. It's an ambitious bit of narrative filmmaking. I've been very lucky, in the last few years, with the directors and actors I've worked with. I hope to get to work with him a third time."

To his delight, he was able to introduce Alatriste's director, Diaz Yanes and Cronenberg, when he and Cronenberg were in Spain to publicise their film A History of Violence. The two directors have a similar dark sense of humour and he knew they would hit it off.

There is one more thing that Mortensen wants to add, right at the end of the conversation. He would like to send his best wishes to a longtime Melbourne resident. His greetings - and his congratulations, for a Spanish Academy Award nomination - go to the head of make-up for Alatriste, Jose Luis Perez, who lives in East Bentleigh, and who worked on The Lord of the Rings. He's glad to know Perez and his family can see the film in their home town. Now he just wants to do whatever he can to help it travel further afield.