Could Viggo Mortensen Be The Perfect Man? 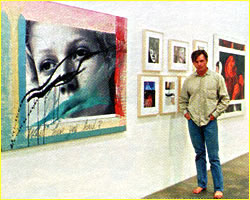 He's handsome. He's talented. He's about to destroy evil in The Lord of the Rings. And he doesn't care about being a star! Here's what Viggo is really like.

He plays the vigorous hero Aragorn in the wildly successful The Lord of the Rings: The Return of the King, the final film in the epic trilogy that has already made $1.7 billion. Yet Viggo Mortensen, 45, remains a Hollywood mystery. Here's the lowdown on this reluctant leading man.

Mortensen has appeared in nearly 40 films, portraying characters as varied as an Amish farmer in 1985's Witness to a cannibalistic villain in 1990's Leatherface: The Texas Chainsaw Massacre III. Born in New York to a Danish father and American mother, he spent his childhood living in Denmark, Argentina and Venezuela before settling, at age 11, in upstate New York.

Today, Viggo, who lives in Topanga Canyon, Calif., speaks English, Spanish and Danish. He also picked up a bit of Maori, the native language of New Zealand, during the time he spent filming The Lord of the Rings saga.

Mortensen can thank his 15-year-old son, Henry - whose mother is Viggo's ex-rocker ex-wife, Exene Cervenka - for choosing his blockbuster Rings role: When director Peter Jackson called Viggo for the part of Aragorn, the actor was utterly unfamiliar with the J.R.R. Tolkien series. However, Henry, who's had pint-sized parts in a handful of Viggo's films including 1995's Crimson Tide, was a big fan of the books and convinced his dad to take the role. Henry then got to join Viggo on the New Zealand set in a full suit of armour as an adolescent extra for a sweeping battle scene.

Viggo is also a photographer, painter and poet. "I've always liked to write stories and poems," says Mortensen. "I learned watching other people do it and by trial and error, just like acting."

Mortensen has his own publishing company, Perceval Press, which prints just a dozen art books - including his own - each year. He's also had gallery exhibits of his paintings in New York, Los Angeles and New Zealand. Oh, and those canvases that his character in A Perfect Murder created? Those were Viggo's.

Mortensen definitely marches to the beat of his own drum. For starters, the actor allegedly once hit a rabbit with his car, then proceeded to roast and eat it.

In order to fully inhabit his character of Aragorn, Viggo slept in costume for weeks at a time. "He goes fishing in his costume," says Sir Ian McKellen. "He sleeps with his sword. He buys the horses he rode and takes them home at the end." Adds co-star Elijah Wood, "He's mental. But in a good way."

Want more proof? Instead of the standard luxury lodging demanded by most stars on set, Viggo and co-star Orlando Bloom shared a converted bus while filming Rings. Viggo stocked the bus with a wine cellar and wallpapered the inside with candid behind-the-scenes photos.

A source on the set said the bus was the site of frequent cast parties, with the motto, "Everyone is welcome, but when it's time to go, get out!" For the holidays, the continually creative Viggo even constructed a Christmas tree for the bus out of, uh, tampons.

"I'd be lying if I said it was serious business and all hardship," Mortensen says of the making of The Lord of the Rings. "It was a lot of fun. All of a sudden, I'm standing in this forest with mist and a real sword and cape." Reflecting on the experience, Viggo jokes that this trilogy could be "fodder for spoofs on Saturday Night Live for the next four years!"

While filming a battle scene, Viggo's face was slashed by an extra's armour, splitting his tooth in half. According to Rings director Peter Jackson, after the missing molar was pointed out, "Viggo picks up the tooth and says, 'Does anybody have any super glue and we can keep on fighting?'" (Ultimately, he went to the dentist instead.)

Viggo also has a pronounced scar on his upper lip from a teenage accident that Mortensen mysteriously refers to as a "combination of a fist and a barbed wire fence on a particularly bad Halloween night."

When Star asked the actor what he makes of being called a sex symbol, he joked, "I think you should ask Orlando Bloom that question!" Mortensen, it seems, considers himself more geeky than sexy: "They call me the 'Dork of New York'," he says.
Top of this page
Last edited: 27 July 2005 14:49:38