Viggo At The Goyas - Part 1 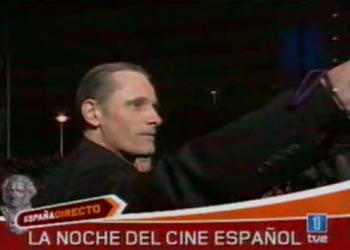 © TVE1.
For the first 25 seconds you can see several images, but what you can hear is another actor being interviewed.

Reporter: And we have Viggo Mortensen, who has arrived...

VM: (pointing) It is the Alatriste forum, look!

R: Everybody wants to be with him. They want to give him a T-shirt. Lots of people came to see you. You are one of the key characters for Alatriste (people are saying Viggo's name in the background). What do you feel?

VM: Well, lots of love. It is very nice to be here. I was already happy because I was going to meet the rest of the cast, but it seems that all the Alatriste fans are here.

R: And there are lots of them, as you can see from the 15 nominations that the movie received. Did you imagine this much?

VM: It is a great honor for us; and the movie is not very well known outside Spain yet, but it will happen too.

R: You are nominated in the category of best actor in a leading role. There are lots of bets for you... We'll see what happens.

VM: I would be surprised, really, not being a Spaniard and all that, I think...

R: Your Spanish is very good...

(Woman's voice points out: From his years in Argentina)

R: We'll see what happens, and we wish you the best.

VM: Let's hope everybody is lucky.

VM: Have a good night.

The other lady in black adds that she finds him very handsome, and when asked if she thinks he will win, she says she doesn't know.

The clip continues but they don't talk about Viggo any more, they continue talking about the awards in general.
Top of this page
Last edited: 30 January 2007 14:36:38