To The Captain Who Doesn't Appear In The Painting "The Spears" 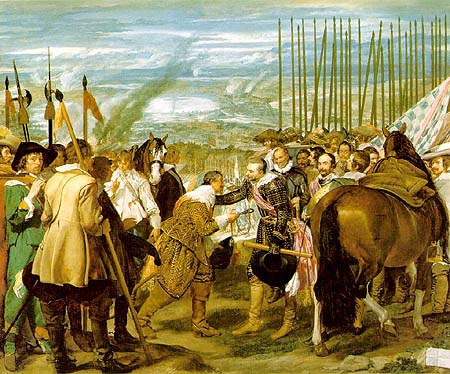 "The spears" or "The surrender of Breda". Painted …
Image found by Targul
An approach to all the heroes whose faces and names were hidden and erased by history. 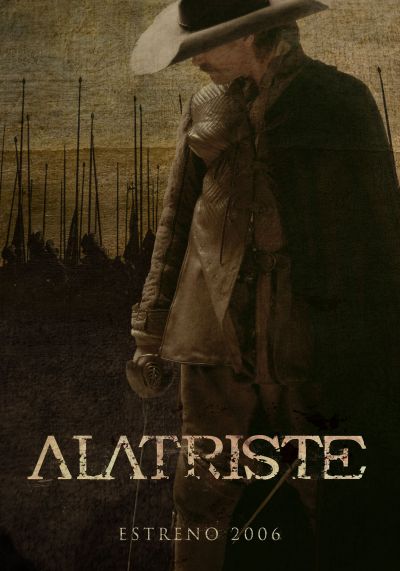 © 20th Century Fox.
It's not a chance image. Or a sporadic gesture. It's the bullfighter's manner at the end of his performance, after the sword manoeuvre. The look of a satisfied man who, at the same time, gives a sidelong glance to death, which is laid on the sand, after having looked at it face to face and at its eyes just some minutes before. However this isn't the implacable light on the yellow sand of the bullring at five o'clock in the afternoon; here it has turned into reddish and old, into the colour of leather, the tone of the worn-out and used things, the old polish that the parchments are covered with, ancient books and objects that have been given from hand to hand for centuries, repeating the same story. It's the colour of the dust of the paths that sticks to the boots and muddles the memories; the colour of oblivion, of the rancid things and of the history that is written with sweat; polished and tanned like the leather that hides the soldier's wounds.

Nor is this the exact image of the arrogant-mannered bullfighter, but the countenance of that haughty and declining Spain that is hinted in Velázquez's paintings. And like in one of his portraits, the shading face allows us to imagine the look of the hero, alone, always alone, despite having taken part in struggles side by side with his comrades, struggles from which his body escapes unhurt with great difficulty, but never his soul, the soul of a wandering man, nonconformist, dissatisfied and disappointed, aware of what will be his ruin and the ones who order him and then judge him, those who condemn him and finally forget him. He has the defiant and arrogant bearing of the gambler who stakes everything he possesses, his life, showing no fear of losing, for, whoever has put his life at stake so many times almost ends up getting tired of it.

And on the background the people, the mass, the crowd, sometimes wounded, other times proud and enraged asking for death, asking for mercy, people who humble themselves or praise themselves. People who take pleasure in blood, who satiate themselves with death. For them, apathetic beings that let themselves be dragged and for those who take advantage of that, there are the "leftovers", the ephemeral glory of that day and even the eternity, painted and retouched by master hands for the ingenious posterity. The hero gives up the fanfare and the tinsel to them, the discreet pride of the victor, sunken in his own and banal glory, which are the inevitable argument of the hand that writes history.

In front of the raised victorious spears that Velázquez immortalized, our man, on the other hand, holds his sword down, the cold edge touching the ground, in the attitude of one who keeps away from all the banal grandiloquence that the idiots and simpletons boast and draw on. He moves away slowly, without noises, without pomp.

And although his figure is not yet the one of "the weary hero", like Pérez-Reverte would say, it isn't either the figure of one who hopes for great deeds and better responses, for he knows that the latter never arrive when they are in the hands of idleness and deceit. He may look like he's burnt-out, but not defeated. Luck was on his side again, but, until when?

He doesn't need the vain glory of those who shout out fame, nor wishes the mundane trophies, you would say that he is further, that his look reaches another world, darker and more distant in the veiled horizon that makes its way through the multitude, since for every death that others celebrate with clamorous joy you could say that he sees how his own death is coming closer. His solitary and sad soul is hidden under a sullen and cold face, half-hidden by his wide-brimmed hat. And buried under the hat his challenges and miseries, his doubts and his belated fears, in case he can afford them after all his years of experience with the steel.

The lowered look represents the fall on the sand, the slow and suppressed agony of a rival whom he has been obliged to see as his enemy and in whose eyes he always sees the same cold and straight smile of an even greater opponent, a thousand times repeated, who awaits him.

And however, after hurting so much and bleeding so much, it's life itself, the one that inflicts the greatest of wounds through which, one fine day, he finds out that his own life is bleeding little by little, although perhaps it would be better that it was caused by a sudden stab, so that there's no trace of memory left that forces him to let out a cry or the smallest weakness to keep it. And always standing up, with his hands well armed, hoping for the fortune and consolation of having at least one friendly comrade who can close your eyes. 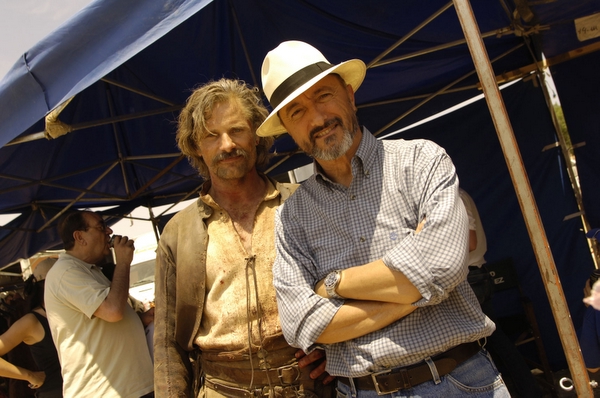 A captain collapsed on the dirty and copper-coloured sand is not the model hero for the official history. He doesn't appear or illustrate the erudite pages of those who prefer the radiant and retouched figure of El Cid. The others, the deprived, the damned, those who are only the every day heroes are not of interest for the arrogant rulers or their loyal chroniclers, who consider them a bother because they see in them the dirty manoeuvres they are entrusted with for very little money with which they hardly support themselves. However this is the kind of hero who is followed by the men who have little to lose, and refuse to be the grey mass of their grey States. That's why history erases their names, hides their faces, despite having tinged with their blood and honour the immaculate sand of those pages that, later on, history will take charge of getting dirty with black and perennial ink.

Pérez-Reverte has taken the sordid hero out of the shadow of the grimy closets of the wicked history and has given him back his voice. He has given him a new chance to be born and die. Viggo Mortensen, with his re-creation of the character, has given, in an already irremediable way and forever, a face and a palpitating heart to all those heroes, alatristes and bravos, from León, Spain, and the world, who have never figured in the history that is taught at schools. Thanks to them and to those who, like them, enhance the human literature, history will have a new chance to correct its idle pursuits and clean the blemish that falls on them.
Top of this page
Last edited: 28 January 2007 08:09:14