By Tina Joehnk Christensen - translated by Rosen and Estel

Source: SKØN
Viggo Mortensen is a man with many talents and roles. Besides being an actor, he is a photographer, poet, painter, American, Danish - and father. A man who despite many eager fans has avoided getting a star attitude. 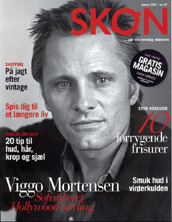 SKØN - 1.2007.
© 2007 SKØN.
Viggo Mortensen is busy. He is in Toronto to present his latest movie, featuring the historic Spaniard Alatriste in the movie with the same name and there are many journalists, photographers and fans who want to talk to Viggo Mortensen. Still he is acting calmly.

"It goes with the job. If it hadn't been for all my many fans, I would not be here," says Viggo Mortensen, sitting in the corner of an outdoor lunch restaurant. He has ordered a bottle of red wine and some light lunch dishes. He pours red wine in the glasses and leans back. He is a bit tired after a couple of long nights. "I am grateful, even though it wasn't much fun last night when we were on our way home after a wonderful dinner and some fans wanted to take our pictures. There are times where it gets a bit overwhelming. Sometimes I am at my happiest when I can be alone."

Viggo Mortensen has no star attitude. On the contrary. He is a humble, straightforward and sincere warm man with a shy smile on his lips when asked about his image as a sex symbol. It seems he doesn't really understand it. "If I really had a problem and did not feel comfortable with it, I couldn't do much about it anyway. People are interested in me for one reason or another. That's OK, as long as it isn't the police. But I do not think about it."

The Spanish actress Ariadna Gil did on the other hand. She had a love scene with Viggo Mortensen and at the showing of Alatriste she told us eagerly: "that he was the loveliest man to play with. Her friends were jealous and constantly sent her SMS' to know how it went with Viggo."

"Well, the women weren't too bad either," Mortensen says boyish and looks like he has had just as great a time. He takes a bite of his lunch-sausage and says that he would have preferred to have a good home-cooked fish fillet.

Alatriste was shot in Spain. Viggo Mortensen does not have roots in Spain, but he feels that he has much in common with the Spanish. He grew up in Argentina where his American mother and Danish father lived on a farm until he was 11 years old. Then his parents divorced and his mother moved to New York with the children.

"The Spanish and the Argentinean cultures are very similar. The way you threat your fellow citizen and the lifestyle itself. People are not good at hiding their feelings, whether they are positive or negative. I am, for example, not a very good poker player. I will always disclose if I have a good or bad hand. It is a culture that is part of me, so it was easy to 'settle down' in Spain."

Viggo Mortensen's father is Danish, but it wasn't until he was a teenager that Viggo went to Denmark and worked for a while as a truck driver. He is fluent in Danish, but points out that he would have to update his language and accent if he should ever make a Danish movie.

"I was nervous about having to speak Spanish, since the Spanish accent is a bit different from the Argentinean one, and I definitely wanted a perfect pronunciation. I haven't yet seen a Danish script I could be in, but I would like to and hope that it will come one day."

There were 10 Danish movies at this year's festival in Ontario's capital, but Viggo did not have the time to see any of them. However, he had a coincidence with Mads Mikkelsen (Danish actor). Sort of.

"I was out in the men's room when I heard a Danish voice say, 'Mads, Mads, kom nu' (Mads, Mads, come on)," says Viggo Mortensen and the boyish grin spreads all over his face. "Turns out it was a Danish guy, who was stood talking on his mobile with Mads Mikkelsen and he was trying to convince him to come over to the hotel, so I took over the phone and chatted with him. I could hear he had a serious hangover. But he was able to get out of the sack."

He smiles and sips on his red wine. "You know all too well what that is like."

Viggo Mortensen is known as being a bit eccentric in Hollywood. He not only quotes intelligent men such as Immanuel Kant, Walt Whitman and Joseph Campbell, he also shows up barefoot at press conferences in New York in the middle of winter, drinks South American tea out of a cup which looks like a bomb, writes poems, takes pictures and makes paintings that are actually good. And apparently he is not a subject of juicy gossip stories and completely without a Hollywood ego.

"Other people often have a better picture of who I am. To get to know yourself is a process you go through all your life, and you never really reach that point. Joseph Campbell said that life is full of sorrow. We can't change that, but we can change our attitude to life. He just meant that we all get old and die."

A movie project always becomes very personal for Viggo Mortensen, who fully commits himself. During the shooting of Hidalgo, he visited the Indian tribes in South Dakota and photographed the Lakota tribe ritual called The Ghost Dance which the Indians danced after the massacre of Wounded Knee in 1890. The pictures were shown at the exhibition Miyelo at the Stephen Cohen Gallery in West Hollywood in the autumn of 2003, and published with the same title from Mortensen's own publishing firm Perceval Press. He founded the company with his partner Pilar Perez in 2002 with the purpose of publishing voices that are rarely heard.

"I am curious about other cultures and I imagine that other people are also interested in other angles and to hear untold stories or see rare pictures."

He doesn't distinguish between the actor, the star, the photographer, the poet, the painter, the Dane, the American and what else you may call him. "I am pretty comfortable with just being a human. A human that does not define himself by a single thing." Viggo Mortensen has a teenage son, Henry, from his marriage with the punk singer Exene Cervenka, and his responsibility as a father is another reason for his choice of career. He wants to spend time with his son at his home in California.

"I want to spend more time with my family, with Henry and also have some peace. Time passes, and the world and people around you change, and you change as well. It's nice to stop once in a while, because otherwise I don't get to write, or experience things that interest me."

The role as a family father is not difficult for Viggo Mortensen. He has often described his relation to Henry as a friends relationship rather than a father-son relationship.

"I have never met a child so well adapted as he is. He is taller and physically stronger than me, and he is a very calm and rational person. I often wonder how he can be so calm. He is very social and he has much more self-confidence than I had at his age. He is pretty remarkable."

He smiles a bit shyly again when the lunch is over and a crowd of fans are ready with paper, pens and cameras. But he seems completely unconcerned by all the fuss around him. "Neither my ego or self esteem depends on this. If it disappears I will certainly not be depressed," he says.
Top of this page
Last edited: 20 August 2007 05:14:13