Johnson, Mortensen call for an end to oil gluttony 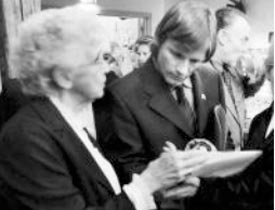 So Dr. Robert J. Johnson started his three-day, 450-mile fundraising tour with actor Viggo P. Mortensen by purchasing a 2006 Toyota Prius, a gasoline- and electric-powered vehicle that has a 60-mile-per-gallon efficiency.

The Democratic candidate, who is challenging Rep. John M. McHugh, R-Pierrepont Manor, for the 23rd Congressional District seat, said the short-term solution to lessening the dependence is to require automobile manufacturers to make more fuel-efficient vehicles.

If elected, Dr. Johnson said, he would push for raising the Corporate Average Fuel Economy regulations.

"If 20 years ago, we directed Detroit to increase their CAFE standards, we wouldn't be in the position we're in now," the candidate said before Saturday's fundraiser at the Partridge Berry Inn, 26561 Route 3, which was attended by about 100 supporters.

Dr. Johnson also said he would work to repeal a legislative loophole that allows manufacturers to earn "credits" when they exceed requirements in one year and then apply them in another year in which requirements aren't met.

"We don't want that," he said. "That's like pollution credits."

The Democratic candidate said the entire Northeast corridor is "the tailpipe of the nation", meaning its air is polluted by particles that drift in from Midwest coal plants.

Dr. Johnson said the nation's top automobile manufacturers often say jobs would be lost if fuel efficiency is improved, but both he and Mr. Mortensen don't see the correlation.

The former Watertown resident compared the situation to the innovation of seat belts in vehicles, when politicians resisted requiring the safety device because of its potential detriment to sales by American manufacturers.

"You don't always expect corporations to do the right things by the people, despite their advertisements," Mr. Mortensen said. "But the people in Congress and the Senate should not forget that they're there because we put them there, and they're there to serve us. And they should be looking out for the people. Obviously, having seat belts was the right way to go. Obviously, being less dependent on fossil fuels by minimizing its use and making cars more efficient, that's a no-brainer as well."

Dr. Johnson said he's also concerned that an oil shutdown in the Middle East could cause a gasoline crisis, or worse, another reason for the Bush administration to invade a third country.

In the long-term, the Democrat said, he'd like to see Congress encourage production of renewable energies.

"Energy is like underwear. Everyone needs it," he said Friday. "We can get it from whole different sources, and there's no reason the north country can't be the center of production."

He called the north country a "perfect marriage" of resources and technical knowledge, and said biofuel and biomass production would thrive here.

Dr. Johnson's campaign has benefited greatly from Mr. Mortensen's three appearances. David N. Kobernauss, campaign treasurer, said the first two nights in Plattsburgh and Oswego, took in about $16,000 in contributions. He said $10,000 to $11,000 came from the $75-per-plate charge to attend.

Campaign manager Jesse Bocinski said Dr. Johnson received an unexpected contribution from a Cazenovia resident, whom he declined to name, who donated $1,000 to attend Friday's event in Oswego.

Mr. Bocinski added that about $3,900 was collected during the first two silent auctions, which offered signed copies of Mr. Mortensen's films and books.

While the Democratic candidate is thankful for the assistance on the campaign tour, he said it's not Mr. Mortensen's endorsement that is the most important.