Source: Diario de León
The American actor responded in this way to the tribute ceremonies that are being held today. 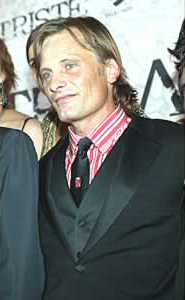 Alatriste Madrid Premiere 8.31.06
Image Benito Ordóñez.
© EL DIARIO DE LEON S.A..
"I have no words to thank the Leonese people for the so many loving gestures they are showing to me, not only the people from the city but also from the province," stated Viggo Mortensen some hours before the beginning of the events that will take place at the courtyard of the Palacio de los Guzmanes throughout this morning, on the occasion of the recognition that the institutions have granted to the American actor.

Viggo arrived in León yesterday morning in a quick trip from the United States and went up to Valdeteja to spend the day with his friends of El Curueño. After the ceremony that will take place in León this morning he'll leave for Torrevieja, where this Saturday at 12:00, at the auditorium of the Hall of Music, he will take part in the launching of the anthology of texts about Cuban art titled The New Cuban Art: Anthology of Critical Texts, published by the American publishing house Perceval Press, owned by the actor.

Straight away the leading actor of Alatriste will continue his journey to Rome where he'll attend the 1st International Film Festival as a guest star on Monday 16th, along with some actors and actresses as renowned as Nicole Kidman, who Mortensen has already worked with in The Portrait of a Lady, Monica Belluci, Richard Gere and the Spaniard Eduardo Noriega. Amongst them other famous faces like Harvey Keitel, Sean Connery, Leonardo Di Caprio who is accompanying Martin Scorsese with The Departed and an old acquaintance and friend of Viggo's, Harrison Ford, they worked together in the already mythical Witness, who will present an award for best actor's agent. As one can see, he has quite a full agenda in accordance with the importance and current moment that the actor's career is going through. A career that has made it to the top but, however, doesn't stop him finding some free time between festival and festival or in the middle of a shooting to go to León and be reunited, whatever the reason, with his friends from the mountains or the city.

The events planned for this morning begin at 12:00 at the plenary room, or weather permitting, at the County Council courtyard, in the presence of the entire municipal corporation, the president of the County Council and councillors, they'll proceed to read the certificates of recognition in which they agree to give the city and the province golden medals to the American performer.

"His professionalism and savoir faire at work - says the text of the City Council document - made him come to the city and the province of León to prepare the role of Captain Alatriste, taking the manner of the Leonese people as a reference to develop his character, as well as the way of speaking and expressing themselves. He has visited León several times and what's more important, he intends to keep on doing it. In every one of those visits he has thoroughly researched on all things regarding our customs and traditions, falling in love, since that moment, with the city of León, its history and its culture".

For its part the County Council document points out, amongst other things, that Viggo Mortensen "has hoisted the flag of the Leonese province on several occasions and has carried the name of León around the world. In the time he was shooting the film Alatriste he regularly visited some Leonese regions that he completely identifies with and where he feels more comfortable, according to what he reiteratively states. Valdeteja has been his most frequent destination for in this Leonese village he has placed the origin of the character he plays in the film, a village that has decided to name him Adopted Son". After reading these certificates and before going to a private reception, the Municipal Female Choir will sing the León anthem which will round off the touching ceremony.