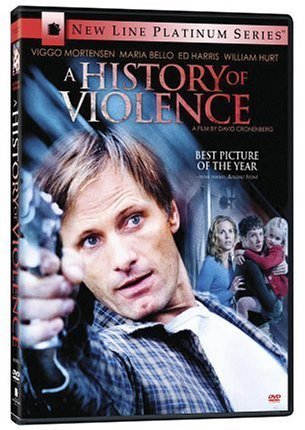 Toronto filmmaker David Cronenberg celebrated his 63rd birthday this week, the day after the loaded DVD for his latest film, A History Of Violence, hit the streets.

It turned out to be an excellent way to celebrate a milestone. The DVD operates at such a high level -- both in the presentation of the film and in the quality of the bonus materials -- that A History Of Violence stands to double the money it is making at the box office.

"Well, it is important," Cronenberg tells the Sun in a wide-ranging interview about DVD culture and the sunny prospects for his own release. "It is very important. In fact, it is conceivable that A History Of Violence can make more money on DVD than it did theatrically."

Cronenberg's complex drama -- a made-in-Toronto production for the U.S. mini-studio New Line Cinema -- stalled at $32 million in North America. It has generated another $27 million internationally, with openings now in Australia, Japan and the Far East expected to bring that foreign total to roughly $32 million as well.That also happens to be the budget of the film in U.S. dollars.


"Well, a little bit," Cronenberg says of being disappointed. "(But) I know that the Oscars is a crapshoot. It's a lottery. And I got so much great feedback for this film from the moment that it showed in Cannes that I really would be an asshole to complain."

Now, even without more Oscar play, the DVD is its own reward. "It has become very important," Cronenberg repeated, "and tons of movies have shown their worth only when they've come out on DVD. Even Spider (his challenging 2002 drama about a man with a severe mental disorder) went into profit because of DVD sales."

Significantly, A History Of Violence arrives in the New Line Platinum Series (which is distributed by Alliance Atlantis in Canada) in widescreen only. With no apologies.

"Because," Cronenberg says, "if you see a fullscreen version on a 4:3 TV set (the old size), you're seeing a completely bastardized version of the movie. So watch it widescreen or don't watch it. I'm basically saying: There is only one version that is the correct version!"

Meanwhile, the transfer of the film to DVD is immaculate. "Totally crucial!" Cronenberg says. While people may set up their TVs differently, using options that mutate the look of a movie, Cronenberg says a director can still optimize the experience.

"You can bring the DVD transfer very close to what it was in the cinema, and even beyond that in the sound." A subtle remix on A History Of Violence makes the sound more suitable "for a smaller room," he says. Meanwhile, the visual integrity of the film is also maintained. "My director of photography (Peter Suschitzky) and I agonize over every shot to make sure that it's going to look as close to the theatrical version as possible. And it takes time; it takes the will to do that."

It also takes a budget commitment. New Line cooperated. In the past, when studios asked Cronenberg to do commentaries on the DVD release of his older titles, he refused unless he was allowed to supervise the transfer. "So, if it says director-approved, it really means that I approve every aspect of it," he says.

Unlike some filmmakers, such as M. Night Shyamalan (The Sixth Sense) who is bitter about the waning of the theatrical audience, Cronenberg is accepting, even enthusiastic, if the DVDs are done right.

"Oh, I love it, frankly," he says. "I mostly see movies at home on my TV set on DVD. I very rarely go to the cinema."

Naturally, he and wife Carolyn own a sophisticated widescreen TV with surround sound to maximize their viewing pleasure. But it goes beyond the technology. Cronenberg says he recognized from the beginning of his career -- when he made the horror film Shivers (1975) and Rabid (1977) -- "I knew that more people would see my movies on TV than in theatres."

For A History Of Violence, that process may be crucial. While the film looks like a mainstream action picture, it is layered with subtle, oblique analysis of the nature of violence in American society. You may need to watch it more than once at home to get it.

You can truly get behind the scenes

It was no accident that the extras on the DVD of A History Of Violence are rare, if not unique, and free of the self-congratulatory hype that sabotages many DVDs.

"For me, it would be soul-destroying to be part of that," David Cronenberg tells the Sun, explaining that he wanted to be shown, "warts and all," to let young filmmakers see a veteran director in action.

The videographer hired to be his shadow on his 53-day Toronto shoot was Carolyn Zeifman -- and she happens to be Cronenberg's wife.

"If you want to get subtle moments that just occur spontaneously when you're shooting," says David, "the videographer has to be there all the time and working and smart about where to be, where the action might actually be happening. Obviously, doing it with someone with whom you have a relationship certainly helps because you trust each other."

Each was wary, at first.

"I don't put myself in situations where I'm not wanted," Carolyn said yesterday about gaining their trust. "I'm not like the paparazzi where I would climb walls and do terrible things to invade people's privacy. I really respect everybody's privacy."

Working with young editor Julie Ng, Carolyn massaged all the behind-the-scenes footage they gathered -- including at the Cannes premiere -- into a series of stories that show what it is really like to work with David Cronenberg on a movie set.

"Our goal was to try and give them (the DVD audience) something different that would really identify the feeling on this particular set and not just them something (generic) about how a movie is made."