Categories: Quotable Viggo
Time for another fun Quotable that fits nicely with our 'Viggo and Friends' theme! A few weeks ago, I did a Viggo/Fassbender Quotable that contained one of Viggo's classic wind-ups (see first quote below). It got me thinking about all the other wind-ups he's been involved in over the years, sometimes on the receiving end as he gets as good as he gives, with some stories running and running. Remember the apocryphal goat farm? It all makes for a very long Quotable! I've included my favourite wind-up of all time – the windsurfing reporter – even though it's not long since I posted it here. How could I possibly leave that one out? We still all deserve a treat. 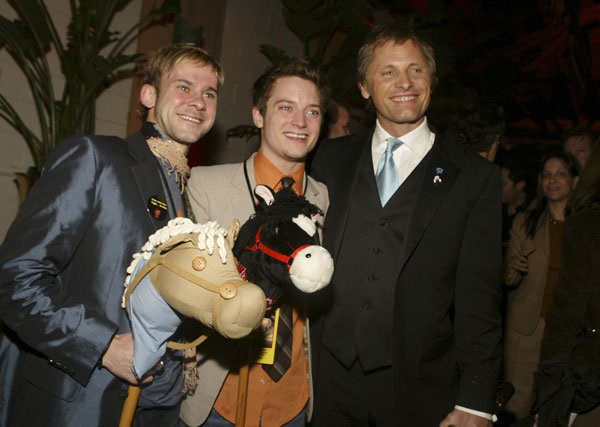 Viggo said that on the set Michael would hop around on one leg with a large red eyepatch to prepare for his scenes. What the hell was that about?

Yes, yes, I don't know what that was about. You'll have to talk to Michael about it to get the story. You have to understand that Viggo, being as playful as he is, could totally be making that up.

"Thank God for special effects, makeup the voice dubbing and all that. They completely replaced Kodi, thank God! We had Andy Serkis [who played Gollum in "the Lord of the Rings" movies] do it."

Viggo Mortensen sets the record straight about his acting career, 'The Road' and 'The Hobbit'
By Carla Hay
Examiner.com
25November 2009

Reporter: You both had to go to some tough emotional places in this movie. How did you turn that off once the take was done?

Mortensen: He'd tell me I sucked.

Smit-McPhee: Then he went back to his room and had a cry.

"It is a Norwegian ghost story. It is called 'The Road to Resurrection.' I come back as a Viking ghost and he's in the Italian mob,"

What was it that got you interested in A Dangerous Method? Was it mostly working again with Cronenberg, or the psychological theme ? Or both?

Firstly, working with David Cronenberg again. Secondly, the bait that David threw my way, in the form of an elaborate system of undergarments that Sigmund Freud was reputed to have employed on some of his summer excursions deep into the Alps. They included an elaborate system of miniaturised pulleys and wires that assisted in muscular stimulation for the steeper climbs. I was allowed to wear these undergarments in all scenes whether I was climbing or not.

When I read interviews about History of Violence, the interviews really emphasized the degree to which you two collaborate. Tell me, how do you two work together?

DC: It's a total lie. I do everything, Viggo does nothing. I do all the work. But he pays me to say that he does a lot of stuff.

VM: Also to say that I'm thoughtful and considerate.

Asked about his preparation for the [fight] scene, Mortensen said, "I was paid a great deal of money."

Added Cronenberg: "When we started to shoot the scene we were surprised to discover that Viggo has no genitals so we had to CG [computer-generate] them in."

"I had to give some of the money back," said Mortensen.


Maria Bello and something fishy

To Maria Bello the enigmatic Viggo Mortensen's still waters don't just run deep - they're rife with wildlife. "Viggo is obsessed with fish," says Bello, 38, of her A History of Violence co-star. No word, though, on if he loved the piscine-themed decor a secret interior designer created for him. Says Bello: "I'm happy to say, on the last day of shooting he walked into his trailer and saw a three-foot dead fish hanging from his chandelier. I'm not at liberty to say how it got there. But I'm very proud of it."

He's known as a practical joker on set. "There's no sense in doing something, especially if it's a hard job, if you can't have a little fun," he says.

"On Lord Of The Rings we had these little people who were stand-ins for the hobbits. One time Dominic (Monaghan, who played the hobbit Merry) and I mimicked this one particular guy who had a really distinctive voice and rang the producers to say that all the little people were stranded on (New Zealand's) South Island with nothing to eat and no water. It became this big crisis and the producers sent everyone scrambling.

"Another time I called Elijah Wood every day for six weeks pretending to be a long-lost German friend. Most of the calls were in the middle of the night. Fortunately he thought it was funny..."

For the past two years, Viggo and I have been involved in trying to sabotage each other in the media by giving each other s***. For the second DVD of The Two Towers, the extended cut, there's a documentary of the actors just giving each other hassles, and there's HUGE stuff going on with Viggo and me, where we're just making up rumors about each other, and makin' out that things happened that actually didn't happen.

…I would say probably 95% of the work that you see as Viggo onscreen is completely computer generated, because he has a wooden leg and he can't run.

"…six weeks ago I'm in Spain and I'm doing press for Dredd and I see that Viggo's got a film coming out as well called, 'Un Plan' and my press day is happening the day before his, so with every single journalist that I talk to, I do my interview and as they're walking out, I'm like, 'Oh I got a day off tomorrow' and they're like, 'Oh really?' And I'm like, 'Yeah, yeah, I'm going to go to Viggo's farm; he's just bought a goat farm in Segovia, he's got a thousand goats! He's making goat cheese!'…well, it was reported on the national news! It was published in newspapers! And the next day, every single interview that Viggo went into, they asked about the ******* goat farm. A thousand goats! So I get this email from Viggo. It starts: 'You bastard.' It turns out he got so ******* sick of having to defend this goat story that he just started going with it and saying, 'Yes, I like the spotted goats because they fart less and their cheese tastes sweeter.'"

Mortensen sports some cool-looking facial hair in Appaloosa. But Viggo got his sarcasm on when asked "did you grow it yourself or was it a piece?"
"No, I had someone grow it for me," he replied. "There's a beard stubble farm, as it happens, just north of Sante Fe where they grow the best beard stubble in the world.... They use a rare ... kind of mountain goat turd they put on it and when it was ready, they knocked me out with some kind of weird peyote stuff and sewed it on."

Following the press Q&A, as he left the stage, he paused, looked at the huge 'Viggo Mortensen' image on the screen behind him, and said, 'You spelled my name wrong…' There was a horrified moment as the organisers checked in panic – then he smiled, 'No, just kidding….'

Viggo after accepting the Coolidge Award in Boston

I order a margarita. He orders a whiskey and a beer. The waiter sees a notepad on the table and his celebrity antennae pop up like Ray Walston's extraterrestrial ones in My Favorite Martian.

"So just who is interviewing who?" the waiter asks us. This is a formality. He's pretty sure that this is the guy from The Lord of the Rings. I start to reply, but Mortensen holds up his hand. "She has just set the world record for the longest distance windsurfed by a human being," he says, tilting his head in my direction.

"She windsurfed from Hawaii to the mainland," he continues. "Sure, there was a boat that followed her, and she slept at night, but still. That's what, how many miles?" He looks at me.

"Um, thirty-seven hundred?" I say. I have no idea.

"And not even a man has done that yet," Mortensen tells the waiter. "Isn't that cool?"

One highly regarded website claims that Mortensen has a clause in his movie contracts that he doesn't have to film on Halloween - a sacred day which he shares with his son. Repeat this to him and the intense eyes gleam with mischief: Seriously? That's too funny! Can you imagine? A film company saying, "Yeah, of course you don't have to work on Halloween!'? ....But just for the record, no, Halloween isn't special to me. You know what? I made that story up when I was bored in an interview once and it's come back to bite me ever since. I guess it goes to show that people will pretty much believe anything.'

When I ask him for his favourite joke he responds with a rare one-word answer: "Me".