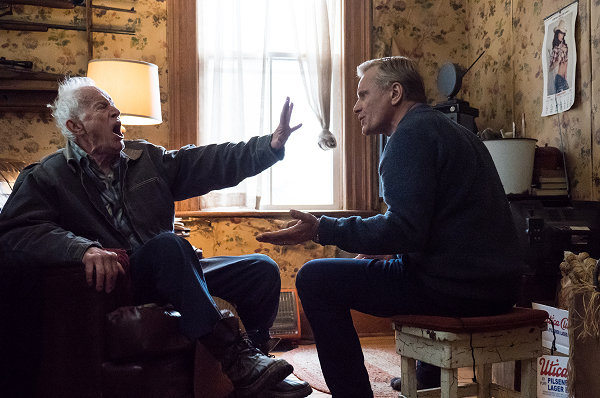 The Lord Of The Rings: 10 Aragorn Mannerisms From The Book Viggo Mortensen Nails

21 September 2019 18:54:36
Source: SCREENRANT.
Found By: Chrissie
Categories: Reviews The Fellowship of the Ring The Lord of the Rings The Return of the King The Two Towers
On the eve of Bilbo's and Frodo's birthdays, this is a fun article. Thanks to Chrissie for the find from SreenRant.
Quote:

You can talk about practical special effects or amazing set locations, but in the end, it's all about casting that makes a good movie great. The Lord of the Rings Trilogy cast included some amazing choices that brought many beloved literary characters to life. Viggo Mortensen was relatively unknown with some impressive supporting roles under his belt in big-name pictures like Witness and Crimson Tide when Peter Jackson found him. The crucial factor was whether or not Viggo Mortensen could handle both a leading role and one of literature's most complex and beloved characters, Aragorn, the descendant of Isildur and heir to the throne of Gondor.

As if carrying the weight of Tolkien's masterpiece wasn't enough, and we have to give props to Mortensen for being such a great Aragorn. Not only was he a compelling leading man, but he also brought Tolkien's vision to life. Viggo made us all believe that the King had finally returned. Here are 10 times Viggo Mortensen takes his cues from the book and just crushes it on screen as Aragorn, son of Arathorn.

You can talk about practical special effects or amazing set locations, but in the end, it's all about casting that makes a good movie great. The Lord of the Rings Trilogy cast included some amazing choices that brought many beloved literary characters to life. Viggo Mortensen was relatively unknown with some impressive supporting roles under his belt in big-name pictures like Witness and Crimson Tide when Peter Jackson found him. The crucial factor was whether or not Viggo Mortensen could handle both a leading role and one of literature's most complex and beloved characters, Aragorn, the descendant of Isildur and heir to the throne of Gondor.

The King and the Wizard

© New Line Productions Inc.
This is a reference to an ancient legend that Tolkien would have known quite well. The tales of King Arthur and Merlin are ancient, already part of a rich oral tradition centuries before they were written down, and Tolkien was trying to recreate that relationship.

Aragorn wavers between defiant and unsure in the books, and it is often in council with Gandalf that he finds his way. Mortensen makes this a reality in the movies with some help from the equally talented Ian McKellen, who also had some success bringing Tolkien's authentic vision to life.
Quote:

The Inn and the Pipe

© New Line Productions Inc.
The mysterious Ranger's opening scene is stellar because it's lifted from the book almost word for word. That includes the scene itself as well as the dialogue and characters. Mortensen channels the brooding and mysterious Strider with perfect authenticity, a thrill for those who know the book, and a faithful interpretation of the literary figure for those who don't.

The quiet table in the corner, the low-hanging hood, the pipe, and eyes that are constantly on the watch, are all part of Tolkien's authentic vision.
Quote:

© New Line Productions Inc.
In the book, we're told about Aragorn's exploits in the wilds in great detail. In the movies, Viggo has to find a way to show us instead. His clothing, weapons, in-depth knowledge of the wilds and his scruffy appearance give us some obvious clues to what he does when he's not sitting in an inn babysitting hobbits.

The costuming and design people can't have all the credit, however. Mortensen's portrays Strider as a tough, no-nonsense character with rough edges that may not suit his bloodline but reflect his real character and upbringing, which is just how Tolkien wrote it.
Quote:

© New Line Productions Inc.
In the book, Aragorn speaks with different levels of formality depending on who he's with but he's always articulate. It's a reflection of his awareness of protocol, and as the future king, he knows he'll be on the receiving end of some pretty heavy respect in the future. Mortensen is also excellent in this respect.

We aren't surprised when we find out that Strider is Aragon, Isildur's heir, just based on his use of language alone. Tolkien was one of the 20th century's greatest masters when it comes to language, whether he was writing with it or creating them, and he carefully wove this into one of the story's most prominent characters.
Quote: 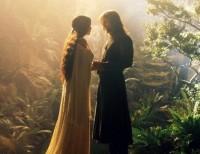 © New Line Productions Inc.
If you read the books, you knew Tolkien was using Arwen and Aragorn as a callback to the story of Bern and Luthien, as it's central to the origin story of the One Ring, The Silmarillion. He references the old story continuously, either in dialogue, poetry or breaks for exposition in the books, to make sure the audience understands that this isn't just another love story but an epic tale of devotion that had echoed through the ages.

Mortensen brings this to life in several scenes, in particular, the one where he sings the song of Beren and Luthien. In both the movie and the book, the tale is told with both longing and sorrow as well as deep affection.
Quote:

© New Line Productions Inc.
In the books, Aragorn invokes Elendil, an ancient hero, when he draws his sword against his enemies. In the scene where the Uruk-hai army attacks the fellowship at the end of The Fellowship of the Ring movie, Strider throws himself into the fray while echoing this battle cry.

Elendil was the father of Isildur, and legend has it that he and his family escaped the destruction of Numenor to found the Kingdom of Gondor. Aragorn isn't just calling on his ancestors but a whole history and culture that make Middle Earth realistic and immersive. Mortensen makes us believe it when he starts cutting through Uruk-hai while calling on his godlike ancestor.
Quote:

© New Line Productions Inc.
When we first hear the reasoning that Strider can be trusted because a servant of the enemy would have a more pleasing appearance but somehow be less likable, we understand the concept but the book doesn't provide a visual. It's no accident that Tolkien is invoking Shakespeare here, too, as the line "fair is foul and foul is fair" is right out of Macbeth.

Viggo manages to perfectly illustrate Frodo's quote with the right amount of mysterious tragedy, faint hope, and an exiled mountain man brooding through his beard. It's just as Tolkien intended it.
Quote:

Staring Death in the Face

© New Line Productions Inc.
"I do not fear death."

A quote from the book that also made it into the film, this line initiates the descent into The Paths of the Dead. Aragorn declares it with courage and defiance, and Mortensen rises to the occasion in the same way when the cameras are rolling.

These are some of the creepiest and darkest scenes in the books, but Aragorn guides the reader through it. Mortensen does the same while we hang back with Gimli and Legolas, brave as we can be in the face of living death.
Quote:

© New Line Productions Inc.
Well, it is Sean Bean, so we're not that surprised that his character dies. What did surprise us was how he perfectly embodied Boromir, one of the most famously conflicted characters in western literature. It's interesting that even though we all knew his fate it still ripped our hearts out, and Aragorn shared our sadness.

Despite their differences, Aragorn recognizes Bormir as his kinsman and subject at the end, and Mortensen perfectly expresses the same grief and regret along with a healthy dose of revenge in the movie. He's not just hunting Orcs for Merry and Pippin's sake.
Quote:

The Arrival in Gondor 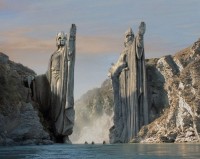 © New Line Productions Inc.
This was an important moment for Aragorn. He had lived in exile for his whole life, and these statues welcomed him home to Gondor, the land of his ancestors. In the books, these statues are intended to replicate the likenesses of Anarion and Elendil and were known as The Pillars of Kings.

The wonder and joy that Aragorn expresses when seeing them are deeply moving. A stunning set-piece helps him out here, but most of the credit for the gravity of this scene belongs to Viggo, who admires them as they float by and refers to the statues as "my kin."