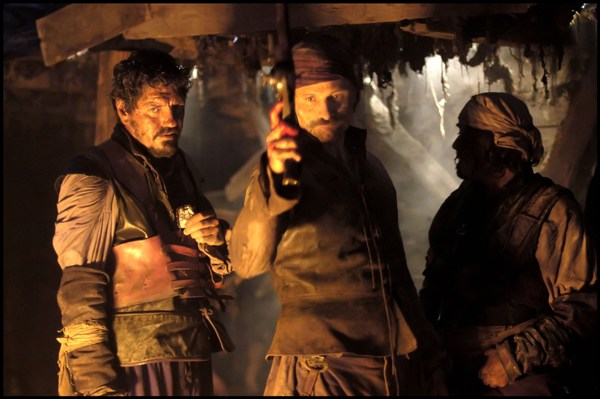 
The only thing left to do is stand our ground and fight. The Spanish film world has burned its bridges over the course of many decades, battling it out against the elements, and now, with nowhere to retreat back to, presents itself before the audience - a full house today - to take the stage and make its mark. Once and for all.

In the presence of such utter daring, there's nothing left for the audience to do but to come face-to-face with this powerful cinematographic Alatriste.

The persona of Pérez-Reverte (false progressives and nationalists better put in a call to their pharmacists) is large, very large, but in addition, the tandem formed by Agustín Díaz Yanes and Viggo Mortensen anchors the movie and gives it splendour. No one who has read The Adventures of Captain Alatriste will think they have been cheated. The audience member who isn't familiar with the books (is there such a person?) will run out and buy them. The spirit of the words has been respected (and here, too, more than ever, blood has been sweated) without renouncing the principles of good movie adventures: A good quarrel is worth more than 1000 words.

And they've done it without prolonging emotional moments absurdly, unlike those films with two or three action scenes and little substance in between. Here there is action. An empire is crumbling, we experience the fall through the mind (and the heart) of the hero (what a challenge: creating a caped, sword-bearing hero who doesn't end up resembling an absurdly amusing acrobat, but who also isn't one of Ingrid Bergman's chess players). Care has been taken to create a movie that appeals to all audiences and the historical rigour of the project balances out things. But in addition to this, the film has an innate originality.

This Alatriste has something, all right.

Mortensen, whose odd accent is initially disconcerting and ends up being a perfect fit for his character's taciturn personality, has brought grit and mystery to the screen. Díaz Yanes has given him depth.

It's not an easy movie. It's brave cinematography, cautious and dark, that gives no quarter and doesn't spare details from a script full of historical twists and sly winks. There's something for everyone, from those who salivate over the views of Spain's renowned Prado Museum (the largest art gallery in the world), to the soccer fans who prefer to spend their Sundays at the Vicente Calderón Stadium (that Luis Pereira!)

A film with panache. 24 million Euros is still not $150 million Hollywood dollars, and that's why the movie's Spanish galleon isn't Master and Commander, but the sword clashes are as real as the peeing in the streets, the shitty taverns and the dusty palaces. It's an achievement because, from the beginning, the most minute requirements for historical credibility are covered in spades. And from there on out, the talent of the secondary characters (Cámara and Echanove in the lead) carries us through until the splendid ending, which arrives without warning, like death comes to good bullfighters.

There's originality and valour. The perfect mix between an adventure film and historical epic. A film with panache.