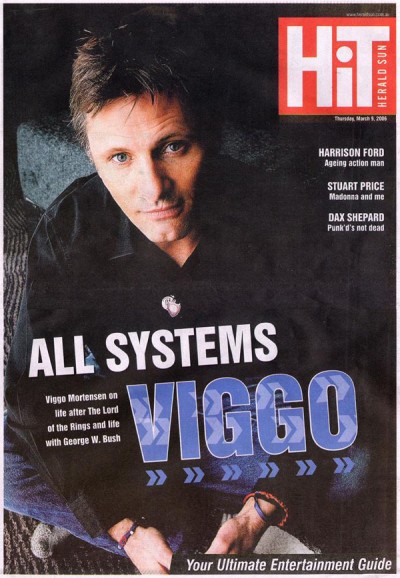 The fact that Townsend was born in 1973 got him fired from The Lord of the Rings trilogy when Peter Jackson deemed him too fresh-faced for the key role of Aragorn.

Mortensen, then 41, was tapped for the part and within 24 hours was flying to New Zealand to play the role that would take him from being a slightly familiar film face to one of the most recognisable in the world.

The dumping made Mortensen uncomfortable and Townsend bitter - he claimed the filmmakers tried to avoid paying him because despite doing two months of rehearsals that he hadn't actually filmed.

'I felt a little funny about it,' the softly spoken Mortensen says. 'It was really an error on the filmmakers' part. As right as he is for that character, Stuart was simply too young. He looked like he was the same age as the hobbits.

'I think he and the filmmakers realised they would have spent half or more of their time trying to make him look older and more experienced than he was. There was enough work to be done without having that added burden, so I think the change was mutually agreed on.

'But I still felt funny about it. As soon as I got the role, I wrote to him and said I was sorry about what had gone down. I said 'it's probably difficult to look at it this way, but you have many more years than I to play roles like that - rest assured I'll do the best I can to honour the role'. And I guess indirectly honour him. I basically wished him luck and said, without saying it, that I wasn't taking any pleasure in replacing anyone.'

But replace him he did, and how. The stories of Mortensen's dedication to the part are legend. He camped in the New Zealand wilderness, took his sword everywhere, and even cooked and ate some road kill rabbit over a fire in the name of authenticity.

The band of young actors who played the hobbits soon started deferring to Mortensen's unsought leadership, but the man himself shrugs off any suggestion his intensity has marked him as an eccentric.

'You mean because I worked hard on it?' he says. 'I think some of that's exaggerated, but the fact is I always work hard and learn until it's all over and the shoot is done. You don't have to, but you're going to do a better job the more you keep informing yourself.'

Informing himself is one of Mortensen's hobbies. Between acting gigs he takes photographs, writes poetry, records experimental music (one featuring the sound of jackboots marching over samples from speeches by George Bush) and paints (he did all the paintings in the background of his film A Perfect Murder).

Unusual for a visiting American, he knows the name of our Prime Minister, and uses it in vain more than once.

He's used to taking leaders' names in vain. He'd flown out of the US just as a minor controversy was erupting over his calling George W Bush 'a beast'.

'It's not my goal in life to comment on politics, but if somebody asks me a question I'm going to answer it. And as a citizen not just of my country but of the world, a person who likes to be informed and thoughtful, once you know something or see something that is misleading, untrue, unfair or harmful to your fellow citizens and the world, it's kind of irresponsible not to say something.

'I'm conscious of the fact that for as long as I'm in the public eye and have a platform, I take it seriously.

'I'm not just going to say anything. I try to inform myself, but the level of deception and dishonesty in my government in recent years is alarming, unprecedented,' he says.

He links the themes of his latest film, A History of Violence, to the war in Iraq. The David Cronenberg film is about a small-town man who is confronted by thugs in his diner. He kills them both and becomes a local hero, but also attracts the attention of an organised-crime boss who accuses him of being someone less wholesome than he seems.

For Mortensen, the film is a love story that is also about justifiable violence.

'Howard, Blair, Bush and lots of other people make such an effort to mislead to justify why they took their countries to war. They realise people need to feel like they're the good guys,' he says.

'That's the genius of Cronenberg and this movie. Even if you're a pacifist and a thoughtful person, those moments of violence committed in self-defence - in other words, understandable, maybe even justifiable violence, if there is such a thing - almost thrill. You applaud it and in some ways you feel "Yeah' and immediately afterwards you feel a little dirty.'

A History of Violence is only the second film Mortensen has made since The Lord of the Rings. (By way of comparison, Orlando Bloom has made six, Elijah Wood five.) Hidalgo was the other.

He's notoriously choosy, but despite an apparent reticence to open up, also happy to do the hard yards of promotion. He's been travelling since May, promoting A History of Violence.

'You're proud of it so you don't mind and it's part of the responsibility, but it does take a long time to promote a movie, which makes it hard to fit another one in. I could have taken another movie and said "No, I'm not available to go to Australia', but I think it's important to have a conversation with people like you and present the movie.'

Mortensen gives the impression this picture, with its opacity and lack of a message, is more up his alley than Rings with its heroes and villains.

'Actually, I had a much clearer idea of where David Cronenberg was going than Peter Jackson, by virtue of it being a different kind of shoot,' Mortensen says.

On Lord of the Rings, because it was such a sprawling production, it became necessary or habitual to rewrite constantly. You'd get new pages all the time and change direction a lot of times.

It was like a seven-ring circus at times. There was a unit shooting going on all over New Zealand and you didn't know what the other people were doing, so there were a lot of surprises when you saw it on screen.'

For years, Mortensen had seemed destined to remain a talented character actor. He had parts in GI Jane, A Walk on the Moon, The Portrait of a Lady and 28 Days, but nothing that was going to make him a star.

'In a way, I'm lucky to have a career, because when I audition, in my mind only part of the job is done,' he says. 'It's when I get the part that I really start working, so I'm probably a slow starter in that sense. If a director is expecting to see the whole thing in the first week of rehearsal or in an audition, they're not going to get it.

'Generally speaking, I've stumbled my way through my career and I've gotten to do what I was meant to do.'

Mortensen was born in the US but grew up in Argentina, Venezuela and Denmark (where his father was born). He agrees with George Clooney's recent comment that Americans should get out of their country as often as possible.

'I was lucky,' he says. 'On the one hand I don't have solid friendships from when I was a little boy because we moved around so much, but I did see lots of different cultures and points of view.

'So I realise that no people is always right, no people has all the answers. People are different and getting along is an art. Respect for others is paramount. We tend to forget that sometimes when it's drummed into us that we're God's gift to the world - whether you're Australian, American or English.'
Top of this page
Last edited: 30 May 2006 13:36:49