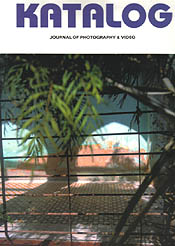 Viggo Mortensen is generally associated with the Hollywood firmament, especially now that he has been immortalized as the heroic Aragorn in the ambitious The Lord of the Rings movies. In Denmark, people have not been acquainted with Viggo Mortensen, the visual artist. Museet for Fotokunst now offers an opportunity to make that acquaintance through a major retrospective of Mortensen's photography.

Mortensen, the artist, is low-key and unpretentious. He portrays his immediate surroundings. His subject matter centers on recognizable landscapes and relationships among people. His photos treat their subjects with great empathy and sensitivity, drawing out their sensuality, their poetic and dreamlike qualities. Moreover, his photos have an autobiographical component. They frequently present his own world and his joy in observing and recording seemingly insignificant events. Mortensen is an observer of the world, assigning importance and meaning to intimate relationships.

But Mortensen is more than a photographer. He is also a painter and a poet. Photography is just one form of expression among many. He often uses different mediums simultaneously. This is apparent in his books of photography, including Recent Forgeries (1998), Signlanguage (2002), and Coincidence of Memory (2002). These books present photos, paintings, poems and notes in alternation, creating mutual dialogue. Photographs are accompanied by text, adding new narratives to the subjects. Likewise, the paintings frequently include text and photographs. Through such overlaps, Mortensen creates a world of his own that is open to associations, narratives and dreams across image and text: he observes the world and gives voice to his observation.

Meeting with the artist in his home, the art critic Kristine McKenna provides an illustration: 'Every inch of his house is given over to artworks, either finished or in progress. There's art in boxes, in stacks, and leaning against walls, which are hung salon-style with yet more art. [...] Mixed in with the photographs, paintings, collages, assemblages, sculpture, and drawings are notebooks filled with poems and short stories, as well as odds and ends the artist has retrieved from the streets. [...] The house is like a giant compost pile that provides an inexhaustible supply of mulch, and when you see how Mortensen lives, you begin to understand how he produces so much art; it's as if he resides inside a paint box.'

Nevertheless, is it fair to say that the camera has a unique place in his heart? His method of linking painting, photography and text would seem to suggest it. His paintings frequently include both text and photography. Take Another Spring, 2000, a painting with photos "peeking out' from an abstract light-blue field. As a whole, the subject is abstract, and there is no attempt to make an unambiguous statement. However, closer inspection reveals that the painting is really a photograph, on which Mortensen has painted and drawn fragments of the original subject.

This generally characterizes his paintings. Featuring a basic, painted ground, perhaps a shade of red, blue or gold, they are abstract and symbolic. On this field, fragments and details of photographs appear. He thus uses photography to capture an element of reality and painting to reflect on his observation.

To observe, of course, is to see. When you observe, you sense patterns and note connections. Mortensen especially makes record of intimacy and relationships, both between himself and what he photographs, and among phenomena in the world around him. He points out his own perception and experience of the surrounding world, while pointing out photography as an opportunity for experiencing intimacy. Thus, his photographs come to resemble small reflections on meaningful experience. And likewise, they are images of how he perceives the world around him. They are like little self-portraits.

Mortensen's observation of intimacy finds expression in a variety of ways. All of the photographs center on his immediate surroundings. The surroundings are familiar: gardens, houses, kids and pets, but familiar also in being phenomena we encounter daily but do not always pay attention to. It is the color of a flower reflecting the lines of a nearby piece of furniture, or children playing in the yard. In that sense, it is also an anonymous world he presents us with. Anonymous, because we only perceive it in stray glances. In Mortensen, the familiar leads to an existence unnoticed by our awareness.

For the same reason, all photographs contain a duality of intimacy and distance. His camera establishes intimacy and closeness with his surroundings, but because of the anonymity of the subjects, the photos always involve distance. As it is ephemeral, this world tends to vanish and be forgotten. Yet, this world is present; it is right there before our eyes. However, we do not pay much attention to it, as our gaze routinely moves on. It is only elevated out of its hidden existence for as long as an observer, such as Mortensen, pays attention to it. Through his gaze, this world is rediscovered and reobserved.


Accordingly, in Mortensen's photos, places and persons can be anonymous, and the subjects fugitive. His "intimate relationship' to the subjects is always instantly recognizable: the people he photographs stand close together; lines, patterns or textures reflect each other; an arm, a stomach or a face may emerge from hazy or glowing colors or a person may look directly into the lens. In Chris' Dogs, 2001, three shadows emerge from gorgeous, hazy-golden tones and are slowly identified as running dogs. The subject is essentially abstract and bears a certain resemblance to Mortensen's paintings. Again, it is precisely the anonymity of the veiled and hazy expression that brings out the intimate relationship as the recognizable.

However, Mortensen does not always focus on intimacy with the unnoticed world. The photographic act, apparently, also provides an opportunity for himself to experience intimacy: it is his own world we encounter. These are his family, his friends, or people he meets on his way, and the situations are always intimate. It can be a street he has strolled down, his garden and pool, or places he has travelled to, perhaps to shoot a movie: Amsterdam, New Zealand, Argentina and Denmark. Often, Mortensen includes himself in the picture. Or someone in the photo is photographing him. Accordingly, intimate affirmation of the relationship between that person and Mortensen is established. Elsewhere he appears as a shadow, leaning into the picture - as a working visual artist or as an actor on a movie shoot.

In these self-portraits, he points out the ability of photography to record existence. He records himself as existing in the world, and his observation of the world. The issue is about his relationship to the world around him. Although Mortensen may take you far and wide, the encounter with the other is always the pivot - whether it is Mortensen's encounter or an encounter between people, animals or objects.

Accident and aesthetic beauty immediately spring to mind to describe Mortensen's visual world. Many of his photographs have a snapshot's qualities of abandon and accident. Likewise, they draw on photo-album displays of family relationships, daily life and events. Mortensen shows the accidental: dogs fighting, children playing or the accidental similarity between a tattooed arm and the pattern of a dress. He photographs his son on his birthday or fellow actors on a movie shoot.

Nevertheless, Mortensen's photos are not real snapshots or real family-album shots. He has an intention with his photographs. He uses photography to get in sync with the world, to transcend the everyday. The phrase 'getting in tune with the world' refers to his perception of, and attention to, certain patterns in the world around him. In other words, he sees aesthetically, searching out beauty and meaningfulness in the accidental and the familiar.

Mortensen's gaze is like that. In photography, he encounters reality through his own unique observation. In his article, 'A Life Tracking Itself,' Kevin Power defines Mortensen's photographs as full of 'small wonders and flashes of surprise' - i.e., they reveal the wonder of the familiar in glimpses. They do not show events. An event has special meaning. An event matters. It is significant. Rather, Mortensen's subjects are occurrences. An occurrence takes place unnoticed and is not assigned much importance. It transpires and vanishes beyond our awareness. Through his gaze, Mortensen assigns significance to such occurrences. He recognizes their beauty and poetry. Through his camera, he slowly unfurls stories of them. Through his camera, he gives meaning to the unnoticed. He seems to be saying that there is a world full of occurrences calling out to be seen and appreciated.

He is also saying that the world has great beauty. That it offers unique sensory experiences. He does not present his subjects in chronological sequence, but in clusters of subjects where moods and relationships are what matter. Past and present are marked by dates, as in Amsterdam, 2001 or Laura, 1995, but relationships between people and their surroundings matter most. He especially uses light to tease out sensuousness and intimacy from his subjects, lending them a nearly material quality. In the colorful photographs, light is equally essential. The images have prominent plays of colors. Often, the focus is on a few simple colors, as a blue, red or yellow shade floods the image, at times blurring the subject. This play with light lends the photos a near-surreal, dreamlike character. His playfulness is also underscored by sly humor.

Through Mortensen's lyrical expression, the photos become like small meditations on the world. In his photographs, he seems to be saying: pay attention to your relationship to your fellow humans. Feel the world. Notice the unnoticed. That is what matters. There is the substance. In his photography, he marks the ephemeral and the fragmented. While making no attempt to anchor it, he brings attention to its importance. It offers an opportunity to quietly be in his presence. To feel an intimacy and presence that is overlooked in the everyday. He does not prompt our gaze to linger on any individual subject but to glide along among the pictures. He encourages us to make associations and to dream. To daydream. The photographs exhibit intimacy, but do not give away their mystique. This world does not reveal its secrets to our gaze, but opens up an opportunity to quietly be in its presence.
Top of this page
Last edited: 24 June 2006 13:32:10